Wrestlers 6th Out Of 48 Without 5 Starters 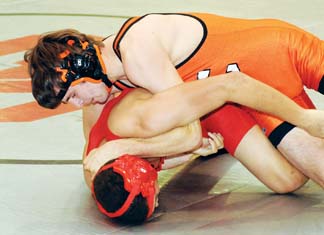 This is why Davie has a wrestling program most of the others wish they had.
Davie went to the King of the Mat last week at North Davidson without five starters. Davie had voids at 112, 145, 171, 189 and 215 because Alex Costner, Shane Carter, Matt Cusack, Toby Lowe and Nathan Sheets were sick. None of the sick is an easy out. They have a combined 55-16 record.
Since the King of the Mat is arguably the toughest regular-season tournament in the state, the War Eagles had no rational right being in the top 10 out of 48 teams. They probably didn’t have a rational right being in the top 15. But there they were, in sixth place when the dust settled.
Coach Buddy Lowery had no rational reason to expect to see Ryan Smith on the second day of the tournament. Smith had spent several hours at the hospital after Wednesday’s first round. But there was Smith on Thursday, showing grit and courage and finishing fourth in his 119 weight class.
Parkland and Soddy Daisey of Tennessee tied for first at 224. Upper Perkiomen of Pennsylvania was third at 167.5. Mooresville was fourth at 158, Lake Norman fifth at 145.5 and Davie sixth at 127.5. St. Stephens was seventh at 114.5.
Considering all the sickness, what …