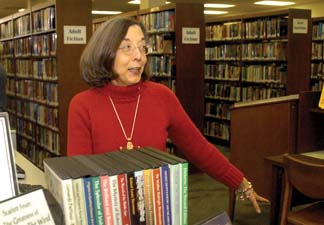 A story like this one only comes around every 30 years or so.
That’s how long Davie County’s former library director Ruth Hoyle worked before her retirement on Nov. 30.
Hoyle, 60, began as Davie County Library director in 1981. And though she’s always loved to read, being a librarian wasn’t the career she had in mind.
After she finished college with a history degree, she says that she did a few different things. But it wasn’t until a neighbor, former Cooleemee Elementary Principal V.G. Primm, asked her if she’d thought about going to library school that she considered a career as a librarian. “So … I went to library school,” Hoyle says.
Her first job was in Fayetteville at the library of Methodist College.But when her father became ill Hoyle returned home to Davie and soon took the position as the county’s library director.
“You get to do a little bit of everything in a small library,” Hoyle recalls. “But it’s a wonderful variety of things.”
Hoyle has seen the library …