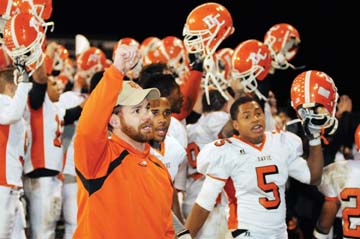 INDIAN TRAIL – You didn’t think this could get any better, did you? This is like a Hollywood script, but this is much better because this is real.
There was no path from a 5-6 regular season to the state finals, so Davie’s football team tightened its chin strap, lowered its head, gritted its teeth and blazed one. Despite facing a team that had cruised through the season relatively untested, the War Eagles jumped all over Porter Ridge, never trailed and held on 21-14 in Friday’s 4A semifinals before a standing-room-only crowd here.
The War Eagles cashed in on their second-ever trip to the semifinals, and now they’re in the state championship game for the first time in their 55-year history.
“Man, it’s special,” Davie coach Doug Illing said. “One day in practice we said: ‘These are the kids that want to play. They’re out here for the right reason.’ It’s like they came together and became determined. I’m a firm believer that good things happen to good people when you work hard, and we kept working hard. This is what happens when you get 52 guys to believe in each other. I’m excited for our kids, for our community, and I’m just proud to be a little part of it …