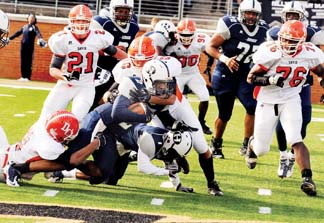 WINSTON-SALEM – There’s a quote that says: “All good things must come to an end.” Davie’s overachieving football team reached the “end” point with Saturday’s 40-0 loss to unbeaten Hillside in the state 4A title game at BB&T Field.
The clock struck midnight on the Cinderella War Eagles, who were hit like a locomotive in the opening minutes and never recovered. The knockout was so quick that Hillside scored three touchdowns in a span of 3:47, two in a span of 2:17 and led 40-0 at halftime.
While Hillside finished 16-0, backing up its slogan “All-In in 2010,” the War Eagles closed at 9-7.
“I wasn’t too surprised,” Hillside coach Antonio King said of his team’s fast start. “The whole team was already at breakfast before we got the wake-up call. Every time they focus in like that, it’s a good outcome. The only thing we went by is what Davie did in their last game. We didn’t look at their record. That was a tough, scrappy group over there, and we just came out and played.”
Hillside was bigger, faster and stronger than Davie at almost every position.
“We knew they were good,” Davie coach Doug Illing said. “One thing we wanted to guard against was the big …