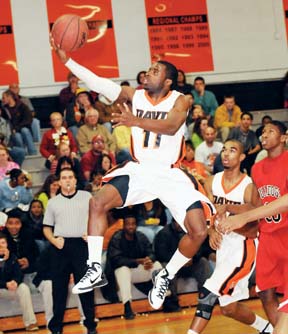 If the Davie varsity boys basketball games last week would have been pickup games, somebody would have uttered the words “Let’s switch ‘em up” at the end of each first quarter.
Davie looked like grown men playing against kids, beating Thomasville 91-54 and River Mill Academy 83-45 in a pair of home nonconference games.
Davie is 8-0 for the first time since 1999-00, and people can’t wait to see how this plays out.
“When we keep our heads right and stay focussed, the games should go pretty good,” freshman Cody Martin said.
“We played as a team,” leading scorer Nate Jones said. “So I think you’re going to see more of what we did (last week).”
In the early stages of the Thomasville game, it looked like it was going to be a wire-to-wire game, with Davie punching Thomasville and Thomasville returning the favor. It was 14-10 Davie at one point in the first.
But then it was punch, punch, punch – all by Davie – and Thomasville wasn’t doing anything. Davie went on a 19-0 run to extend the 14-10 margin to 33-10.
The gym began to rock when Shannon Dillard blocked a shot and Cody finished a fastbreak seconds later …