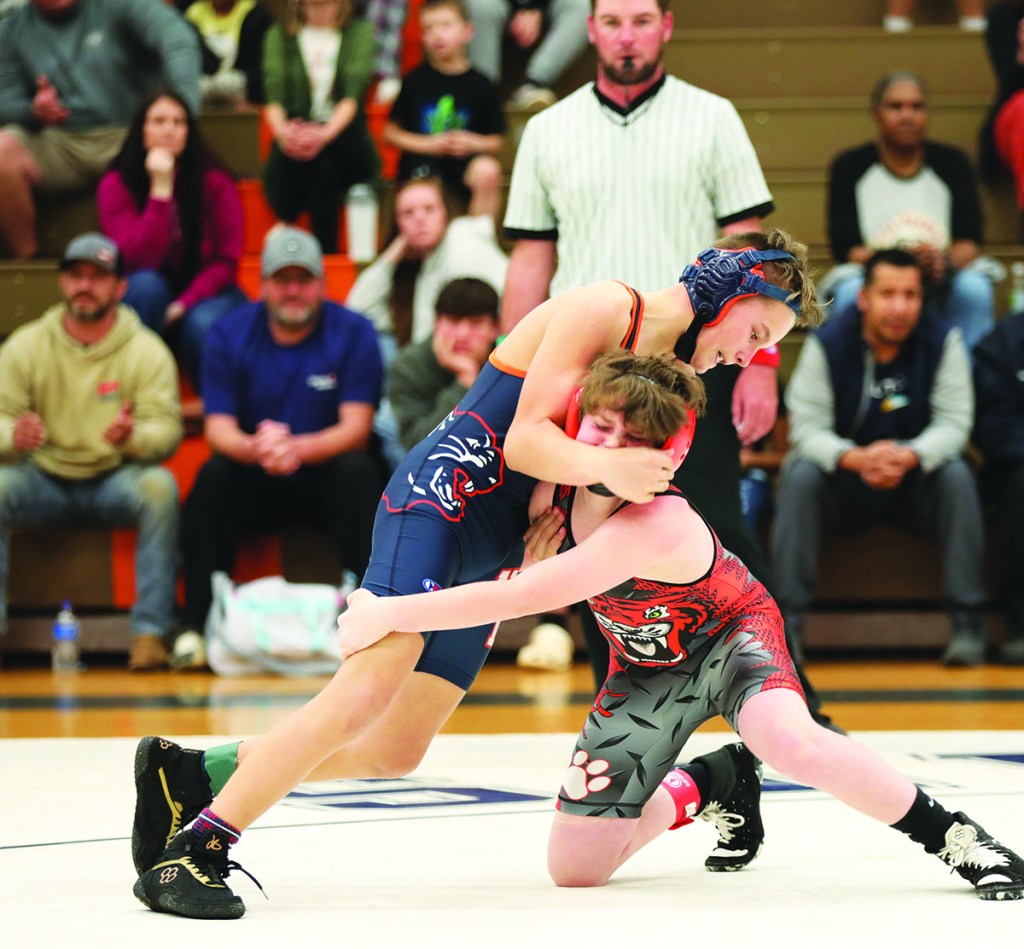 The North Davie and South Davie wrestling teams waged a historic nailbiter at North on Jan. 18. They have a storied rivalry on the mat, but this was the first one decided by three points or less in at least 28 years. If there’s been another one like North’s 52-49 squeaker over South, it happened before 1995-96.

“It was back and forth, high intensity, classic North-South rivalry match,” South coach Russell Hilton said. “It was fun.”

North won two of the first three matches to take a 10-4 lead. Jeremiah Hernandez pinned at 78 and teammate Graylan Anderson major decisioned at 92. Elijah Tatum got South on the board with a major decision at 85.

“That’s a good matchup right there,” Hilton said of Reavis vs. North’s Hayden Potts at 100. “Both of them are returning conference champs. Leighton is really tough on his feet. He’s a very strong, athletic kid. That was a really good match (as Reavis prevailed 6-2).

“(North’s Easton Stanley) is tough (at 108) even though he’s a sixth grader. His brother and dad wrestled, so they know their wrestling. I knew it was going to be a tough matchup for Austin. It was a 4-2 match, but Easton got in a bad position and Austin caught him and put him on his back. That was huge because we knew we had to score some points down low.”

“He’s undefeated in his middle school career,” Hilton said. “If he stays undefeated, he’ll probably be the winningest middle school wrestler in Davie County history because sixth graders just started five or six years ago. He’s going to be close to 50 wins.”

The 134 weight class is where North turned the tide. Brayden Jenkins (134), Isaac O’Toole (140), Landon Carpenter (147) and Javon Carter (154) put together consecutive pins to vault the Wildcats to a 40-25 lead. Jenkins’ match lasted just 24 seconds. Carpenter and Carter pinned in the first period as well.

Even though North surged ahead by 15, the thrilling showdown continued to churn out momentum swings. Martin Fuentes-Roberts (pin at 162), Noe Perez (pin at 172) and Isaiah Leonard (forfeit at 184) rattled off 18 points for the Tigers, who led 43-40 with three weight classes remaining.

The biggest matchup of the evening was at 197, where two unbeaten guys clashed. North’s John Evans pinned David Hicks in the third. That actually clinched the outcome because South did not have anyone at heavyweight. Evans and Hicks were tied 1-1 heading into the tense third.

“David beat John last year, so we had all the confidence in the world,” Hilton said. “Jamey (Holt, North’s head coach) and Timmy (Allen, North’s assistant) both told me I made the right move. This was just one of those times it didn’t work out. John won it for them tonight. Last time at 220 (on Dec. 6), David won it for us. David got caught in the third period, but that’s what you want right there. You want two undefeated wrestlers going for the win.”

Bryan Tapia pinned in the first period at 222 to put South in front 49-46. Earlier in the season, the Tigers had a stalwart at heavyweight in Marcus Fortune, but they suffered a tough break when he moved to Elkin a few weeks ago. As a result, North’s Walker Matthews received a forfeit in the final match.

“Counting prelims and scrimmages, Marcus was 9-0 with nine pins in the first,” Hilton said. “(In the first meeting against North), he pinned in 10-15 seconds.”