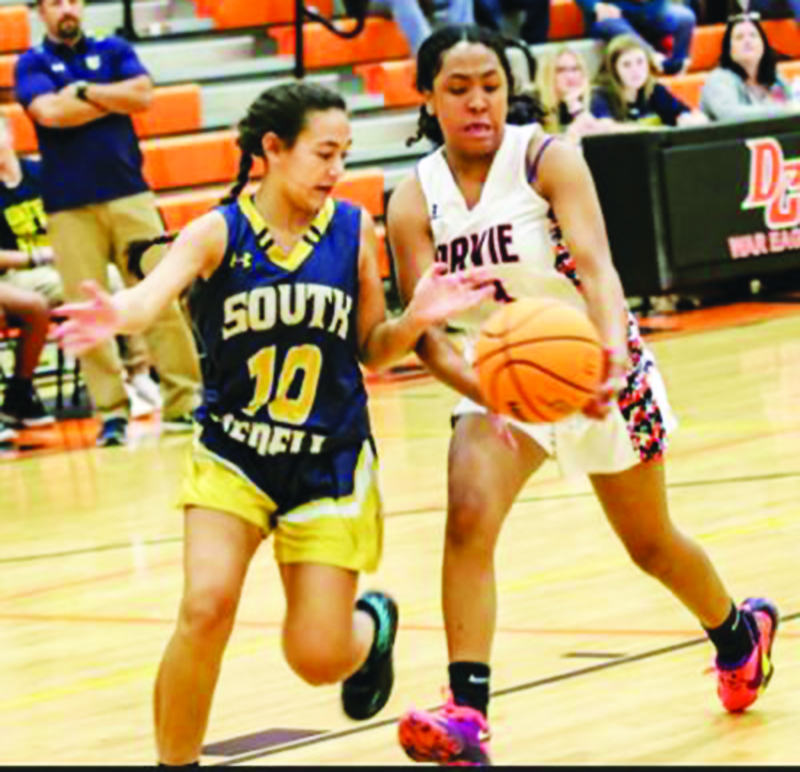 Davie’s JV girls basketball team has turned a corner, its profile completely flipping after 37-14 and 47-31 wins last week in the Central Piedmont Conference.

The War Eagles annihilated Mt. Tabor, 37-14, at home on Jan. 3. Despite playing their first game in 13 days, they posted their largest victory since last year’s 67-2 cakewalk over Parkland.

Davie had all the points it would need by the opening moments of the second quarter. Kaylee Lynch, Britany Hernandez and America Stockton got Davie rolling to a 14-4 lead in the first quarter, and Tabor never recovered.

But the player who had Russell raving in the postgame was Stockton, the freshman who is a year removed from South Davie.

“America absolutely showed out this game,” he said. “She didn’t have a lot of points, but she went to the hole aggressively. She did things that I’ve been trying to get her to do, like be more aggressive around the rim and shoot her shot. That’s big because next year I’m going to need her to replace KK (Lynch). That’s some big shoes to fill, but I think America can do it. She’s always aggressive in practice. She had a block that you could hear all around the gym. That got our girls pumped up and ready to play.”

Davie faced an inspired opponent on the road Jan. 6, and there were anxious moments in the first half as the Titans tried to add to their perfect CPC record.

The War Eagles were down 19-18 at halftime, but they never rattled. Hernandez delivered seven points in the third. Croom knocked in four. Tarpley and Stockton nailed 3s as Davie used a 19-7 spree to jump ahead 37-26. Davie (5-6, 3-2 CPC) kept it going in the fourth, resulting in its third straight win.

“I had a sick feeling, but after the game started rolling, I felt like we got more and more confident in what we’re doing,” Russell said. “At halftime I said: ‘Here’s the time for you to be confident and do your thing.’ I teach two things: defense and fun. We played solid defense, and the third quarter made me feel real good.”

The last possession of the third epitomized Davie’s second-half fun.

“We made 10 passes in 31 seconds, got the ball to America at the 3-point line and she hit a 3 at the buzzer,” he said. “That right there made me feel like I was on top of the world. That was the most amazing thing I’ve seen out of these girls all year.”

The 16-point win probably doesn’t happen without Hernandez’s season-high 17 points, her fourth straight in double figures. Lynch was a beast with 10 points and 12 rebounds. That makes 11 straight games with 10-plus rebounds for KK.

“KK is stepping up as a leader,” he said. “She’s been teaching America how to rebound.”

Davie got another shot in the arm from Hannah McMillian, who has been sidelined all year with an injury. She’ll make her season debut this week.

“We got even better news: Hannah is cleared to return,” Russell said. “We got that news (at the game). It was another feel-good moment.”