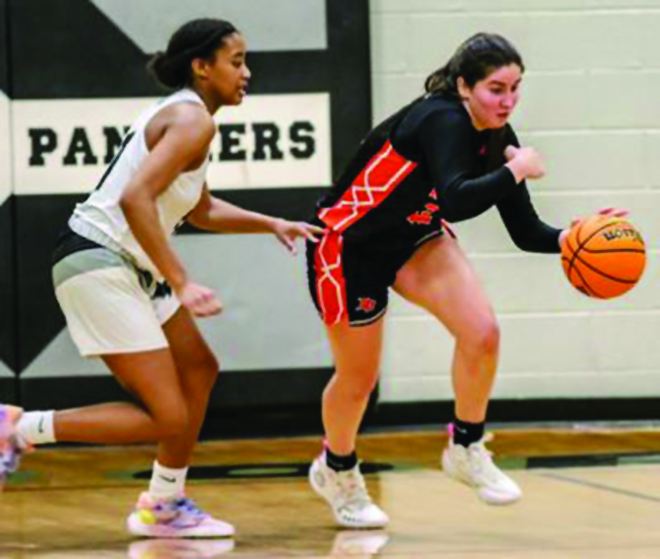 Junior Lauren Colamarino heads to the other end with the ball.

The War Eagles played rock-solid defense against Ledford in the Davidson-Randolph Christmas Classic championship game on Dec. 29, but their defense wasn’t enough to overcome 25-percent shooting. The result was a 46-37 loss to Ledford.

The War Eagles came out on fire. Kenadi Gentry hit a 3-pointer. Peyton Spaugh hit two free throws. Malayka Rankin got a steal and hit a streaking Spaugh for a layup. When Somer Johnson nailed a 3, Davie had a stunning 10-0 lead against an opponent that was 10-1. The Panthers did not convert their first field goal until the 2:25 mark of the first quarter.

But after the superb start, Davie missed five straight shots, went 0-4 at the foul line and only led 10-8 at the end of the first.

Davie had a 23-21 lead at halftime, but it was unfulfilling because it missed seven of 11 free throws and could have had Ledford in a larger hole.

Alas, that was the end for the War Eagles’ hopes. They hit a drought and scored one point in the last 6:26. It was full sputter as 13 straight shots refused to fall. By then, the Panthers had absorbed the early blow, figured things out and were playing like an 11-1 team. They scored 12 of the final 13 points.

“They are an offensive team for sure,” coach Lindsey Adams said. “They have a lot of offensive threats. I told the girls we can’t let a team like that get hot. We did a good job of mixing up the defenses and kind of keeping them out of a rhythm.”

But Davie (7-6) needed the shooting form from recent nights to go with the defense. It wasn’t there. It missed 36 shots, missed nine of 17 free throws and scored 25 fewer points than it averaged (62) during its five-game winning streak. On top of that, Rankin and Lauren Colamarino both fouled out.

“And then we didn’t really have an inside presence after that,” Adams said. “And we couldn’t figure out how to score against their 1-3-1. That was a big game-changer in the fourth quarter. Malayka fouled out with seven minutes to go, and Lauren fouled out halfway through the fourth. Malayka and Lauren are our leading rebounders, so it was really hard not to have them.”

Gentry and Johnson made the all-tournament team.