Write it down, record it: Good advice from more than 80 years ago 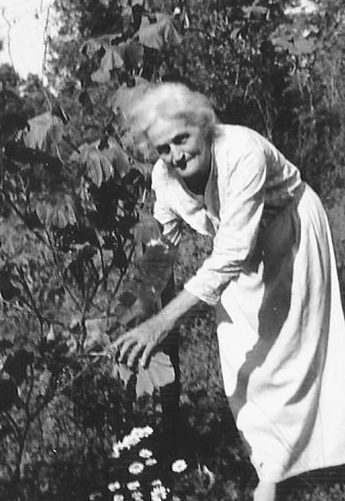 Susan Eaton worked in her garden well into her 90s.

When this old lady was a skinny, long-legged, little girl with pigtails down to her waist, she was blessed to have a dear old aunt who lived in the cottage just down the path and across the road.

That lady’s name was Susan Furches Etchison Eaton.  I spent many hours with that lady, who was my grandfather, John W. Etchison’s sister. I was blessed to have Aunt Susan because she never seemed to be busy with the housework that other Cana women seemed to have.  Of course, Aunt Susan’s house would have probably been considered a mess by most people, but to me it was a wonderful place to spend the day

Aunt Susan was a self-educated lady who went to school for a few years and had spent the rest of her life educating herself.  She loved words and she loved to read. She is the only person I ever knew who spent time reading Webster’s Dictionary, which she kept under her day-bed. Aunt Susan decided early on that I should learn one new word from Webster’s every day.  I did exactly what Aunt Susan wanted me to do—it never crossed my mind that I could disagree with Aunt Susan in any way.  Therefore, I learned a new word from Webster’s each time I went to Aunt Susan’s house.  Aunt Susan underlined each word learned.  That dictionary is still on the shelf at the house where Aunt Susan lived, which is now the home of my daughter, Susan, and her family.

Aunt Susan loved to read so much that she once got her bed so full of books that there was no room for her so she just went to sleep in another bedroom rather than to try to unload her bed.

No matter what happened, Aunt Susan said: “Write it down, record it”. Aunt Susan did that.  She wrote every day about who came to see her, what she had done that day, and also about world affairs.  She also wrote about what the president or other politicians had said or done and what she thought about their actions. Aunt Susan had strong opinions and she voiced them in her journals. She always included the important news of the day. For example, on Dec. 7, 1941 she said, “we are being attacked by the Japanese and President Roosevelt declared war.’  The next sentence may something that seems unimportant like, “Valley had a calf today.” Valley was Aunt Susan’s cow so having a calf was important. In other words, Aunt Susan was interested in everything and she recorded it—she followed her own advice and wrote it down.

My advice to you is to follow Aunt Susan’s advice.   “Write it down, record it.” You don’t need a fancy journal. Aunt Susan used whatever she could find as her journal.   Her journals are interesting in 2022, even though that dear lady died 65 years ago.

Aunt Susan decided that I should write a family history when I was 9 so I would know about my ancestors. Aunt Susan told me what to write.  I attempted to record what Aunt Susan dictated, beginning with great-great-great grandparents, both Furches and Ferebee.  After I finished this project which lasted many days, Aunt Susan said my penmanship was not good enough and that I should copy the book over.  It never occurred to me to argue with Aunt Susan or to question her judgement so I copied the history. I still have that history which I treasures 80 years later.

Aunt Susan was born in 1860, the year that the Civil War began.  In 1864, Union soldiers came to her home when there was a raid in Davie County.  When Aunt Susan heard the sound of horse hooves on Valley View Lane, she got scared.  She hid behind the stairsteps where she could peep out and see what was happening.

The soldiers were greeted by Susan’s father, Orrell Etchison. They demanded money. Aunt Susan watched as her father and the officer came up the front steps and went into her Pa’s “sitting room.” She saw her father take what gold money he had from the bureau drawer and give it to the Union officer. By the way, Aunt Susan thought the officer had little candles hanging down from the shoulder of his uniform—she learned years later that that decoration was really called epaulettes. The Union soldiers then went to the barn and took Grandfather Orrell Etchison’s beautiful white stallion. They got mad because they couldn’t find a good saddle and bridle, which had been hidden in case there was a raid at the farm, called Valley View, and Union soldiers rode the beautiful white stallion back up Valley View Lane carrying with him all the gold money that Orrell Etchison possessed. Writing that story which was dictated by the person who had actually lived through that raid made history come alive for a 9-year-old girl.

Aunt Susan also thought another Civil War story should be added to the history. This was a sad story for the family.  Thomas Furches, who was the son of Thomas and Elizabeth Ferebee Furches and Aunt Susan’s uncle, was killed at the Battle at Chancellorsville, Va., on May 3, 1863. His body was sent to Salisbury on a train. A man from Cana went to Salisbury in a covered wagon and brought the wooden box which contained Thomas’ remains to the home of his  parents on Pudding Ridge Road.  Aunt Susan watched as the men brought the rough wooden box up the steps and put it on some chairs in the parlor. Aunt Susan said that Thomas’ mother cried and wanted to open the box, but she was not allowed. Aunt Susan also remembered the funeral which had taken place about 80 years before she was telling the story.  She even remembered what kind of dress the lady wore when she sang during Thomas’ burial in the Eaton’s Baptist Church Cemetery. What a phenomenal memory Aunt Susan had.

Aunt Susan had written these stories, and she required me to add them to my history.  Today we are so glad to have such a firsthand report.  I went to Chancellorsville a few years ago. A park ranger there was able to find Thomas Furches  name on the roster and he showed me where Thomas was killed during the terrible Battle in the Wilderness during which it is said that the creeks and branches ran red with blood—a horrible loss of life..

Aunt Susan and I spent time writing/recording, but that did not take all day every day.  Aunt Susan also taught many other things. Some days hours were spent cutting rags into strips so they could weave a rug. Aunt Susan taught me to weave on her loom. My legs were not long enough to push the pedals hard but I tried.  Aunt Susan never seemed to get tired of fixing mistakes.  I never came anywhere near being as proficient as Aunt Susan was at weaving, but I loved the time that Aunt Susan spent trying to teach me to weave.

It is my wish that every child in this country could have an Aunt Susan or someone who would spend time with him/her– listening, talking letting him/her know what was happening in their lives is important as are their thoughts.

Therefore, Aunt Susan’s admonishment, ”Write it down, record it,” should be followed.