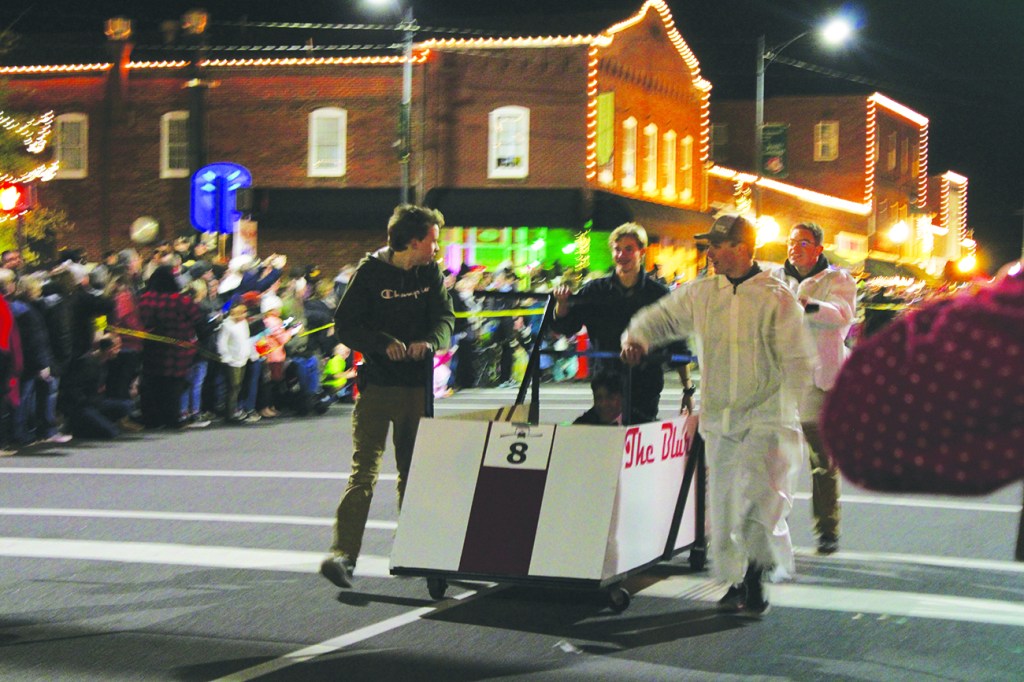 Mocksville raced into the Christmas season on Nov. 18 with the 10th Annual “Twas the Night Before” Bed Race as 16 teams made a mad dash down Main Street.

Race announcer Justin Blue kept the crowd cheering and in the holiday spirit with tricycle races, rock/paper/scissors contests, and partner wheelbarrow races. Throughout the evening, DJ Barry Rentz had folks dancing in the streets.

“Once again, another terrific night for Mocksville.There were lots of creative beds and several new faces,” said Tami Langdon, community development coordinator. A huge thanks to the teams that continue to be a part of this event.

“I’m also grateful to our sponsor, our many volunteers, Town of Mocksville staff, public works, parks & grounds, Mayor Will Markland, Davie County Sheriff’s Office, and Barry Rentz with the Mobile Jukebox, for making the event such a success.

“It takes a team to create this event, and I work with a wonderful group who leads the way. Special thanks to Denise Hendrix for always being organized with details of the maps and getting those heats together quickly; Jordan Hendrix, the elf and manager of the social media; Trevor Walterman, the bed sled guru with tips to build a bed and how to be creative with your design; and Justin Blue, announcer and the guy inspiring the audience to play the games and dance in the streets.”

At stake were prizes for speed and creativity. The fastest team, Just for Fun, took home $200, while the runner-up, Avgol’s Chad’s Pack, collected $125. Green Meadows Baptist Church’s Green Meadows Mission 1, the third-place finisher, rolled away with $75.

Green Meadows Mission 1 Davie also picked up $100 for having the best team spirit, and Skyline National Bank received $100 for the most original bed.

A Total Package prize of $100 went to Mocksville Dentistry’s Tooth Fairies for having the best overall appearance and combination of bed decoration, message, and costumes.