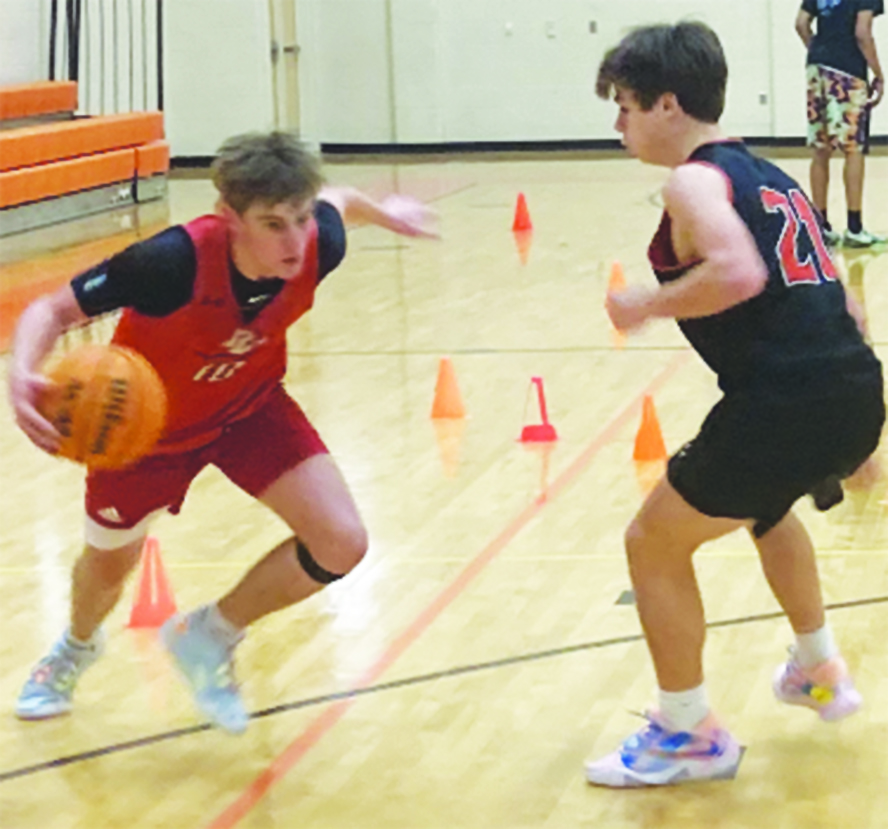 The Davie varsity boys basketball program has produced five straight winning seasons. No. 6 would tie the longest such run in program history (1966-67 through 1971-72), but six might be a big ask in 2022-23.

The 2021-22 story was all about the backcourt of Za’haree Maddox and Zymere Hudson. They averaged 17.2 and 14 points, respectively, and carried the War Eagles to 13-11 and 7-7 in the Central Piedmont Conference, which left them in a tie for fifth in the eight-team league.

But Maddox, Hudson and Blake Walser, who was third with a 9.6 average, graduated. In fact, nine of 14 players on last year’s team have exited stage right. The entire coaching staff is gone as well: head coach Bruce Wallace and assistants Kevin Revels and Shane Nixon.

Since Maddox/Hudson/Walser were responsible for 40.8 of Davie’s 60.7 points on average, new coaches Josh Pittman and Will Tibbs are building from scratch. That means there could be major growing pains this season.

“We have a lot of kids who haven’t played with this much responsibility, so there’s going to be a learning curve until they can thrive in those roles,” Pittman, Davie’s new head coach, said. “From watching film of what they did last year, they seemed to be centered around playing for two players. We’re going to have to be a team and all five players have to contribute.”

And then: “All of them played limited to no time at all last year. It’s going to be an adjustment for all of them. I have to be patient as a coach to understand these are big-time minutes that they’re not used to playing yet. When I say we’re young, I mean young.”

It starts with 6-2 junior Coleman Lawhon and 6-6 sophomore Jackson Powers, who are the top returning scorers. Lawhon averaged 4.8 as a sophomore, with a game-winning buzzer-beater and a 20-point game mixed in. Powers averaged 2.7 as a freshman, his highlights being a trio of 11-point efforts. Their roles decreased as the season progressed, but the evolution of that duo will have a huge influence on Davie’s chances this year.

“In my view, Coleman is a scoring point guard, but he has the skill to get others involved,” Pittman said. “He played a lot of point for the 76ers (travel team) over the summer. He’s still trying to adjust to running the team as well as getting his.

“I’m expecting a lot more from Jackson – not just a pop-up shooter but also a post presence with points and rebounds and playing big on the defensive end. He’s more than capable of doing that. He has all the skills, but he has to have confidence in doing it. When he decides to play strong (inside), he scores. I want everybody to be aggressive as long as it’s within the concept of the team and playing for each other.”

The other two varsity returners are Hayden Williams, a 6-0 shooting guard, and Hunter Davis, a 6-6 senior. Williams did not get off the bench in half of his junior games and he played sparingly in the other 12. But his usage will spike as a senior.

Burke Rosenbaum, a 6-2 guard and a tennis star, is back on the hardwood after not playing as a junior. Don’t be surprised if he’s a factor from the word go.

“He didn’t play last year, but he’s a heck of a player,” Pittman said. “He was probably the most consistent player (in the jamboree on Nov. 12). He consistently brought energy on both ends of the floor. He’s an extremely coachable kid. I think he’s going to play some big minutes. I really like Burke.”

Juniors Ethan Ratledge and Ian Koontz will be important pieces.

“Ethan reminds me of a Ben Simmons-type player, but he has the capabilities to score the ball,” Pittman said. “He puts in the work, but it’s about transitioning the workouts to the game. Sometimes I have to get on him to be more aggressive, and aggressiveness is not just about scoring and shooting. It’s about making a play, sitting down on defense, talking and rebounding. He has so much potential. For a lot of them, it’s like a gate that doesn’t have a lock on it. Just open the gate and walk through. Building confidence is part of my job as a coach.

“I think Ian is going to be a solid guy and a post presence. He can shoot the short-range jumper, he plays hard, he tries to defend well and he grabs boards.”

“CJ is a blue-collar guy,” Pittman said of the 6-5 forward. “He’s a yes-sir, no-sir type of guy that everybody needs. Great teammate, always positive energy. He helps push our bigs in practice. He’s still a little raw, but he’s a great kid to have.

“Braddock (a 5-10 guard) will get solid minutes off the bench. Whether it’s a defensive presence or a big shot, I think Braddock will be like that utility knife and do a little bit of everything.

“Landon has all the athleticism in the world. He’s probably the most athletic kid on the court, and sometimes on both teams. He’s getting a lot better at running sets. When you try to play and think at the same time, you hesitate – but that’s expected.

“Gavin looks the part, he has skills, he’s a lefty and he’s quick. Right now the game is fast for him, but I would rather him play up and play against these guys everyday, get better, learn and mature with the varsity guys because next year he’s going to have to play a bigger role. I think he’ll improve more being on varsity as opposed to playing JV. I think he has a world of potential, it’s just a fast game for him right now.”

Although logic suggests the War Eagles will recede this year, Pittman believes if they figure things out, if they develop confidence, if they play cohesively, they can be at eye level with most of the CPC. Pittman was a flashy hire – his seven-year record is 122-58, including an unexpected run to the 1-A semifinals last year at Winston-Salem Prep – and he’s been a mover of mountains before. Take the two matchups between Prep and Mt. Tabor last year. Prep started 1-2 with a 95-64 belting from Tabor in December. When the teams had a rematch in January, Prep pulled off a 39-point swing, winning 60-52. That stunner was amid a 24-game winning streak.

“I think we can be good,” he said. “It’s just about buying in and building confidence. We’ve got to believe that we belong on the court with East Forsyth, West Forsyth, Glenn, Tabor. Once we get to that point, we’ll be tough to beat.

“I like to run plays. It’s different if you have six or seven guys who are all over the rim and just dunking. Then you can sit back and say: ‘Let’s run transition, motion-style basketball and attack.’ We don’t have that; we have to run sets and play team ball.”

East Forsyth is the defending champion in the CPC, and Pittman considers it the favorite in 2022-23. But he’s also expecting a bunch of fistfights.

“I think all the games will be competitive,” he said. “I think it’ll be a good conference and I honestly believe we’re going to surprise people more than they think. It just depends on when we’re ready to step up and realize we can compete with these teams.”

Notes: Pittman was looking forward to having a mean, tough, defensively-hungry dog in Landon King, who played varsity as a freshman. But King’s football/basketball sophomore year was robbed by a knee injury in the second football game on Aug. 26. He’s facing nine months of rehab. “He was probably my most athletic kid,” Pittman said. “I could tell Landon: ‘Go get him and don’t let him score.’ He’d say: ‘OK, coach.’ He has some offensive skills, too.” … Pittman and East Forsyth coach Monty Gray were high school classmates at East, with Gray graduating in 1992 and Pittman in 1994. “He’s actually the one who told me this job was open,” Pittman said.