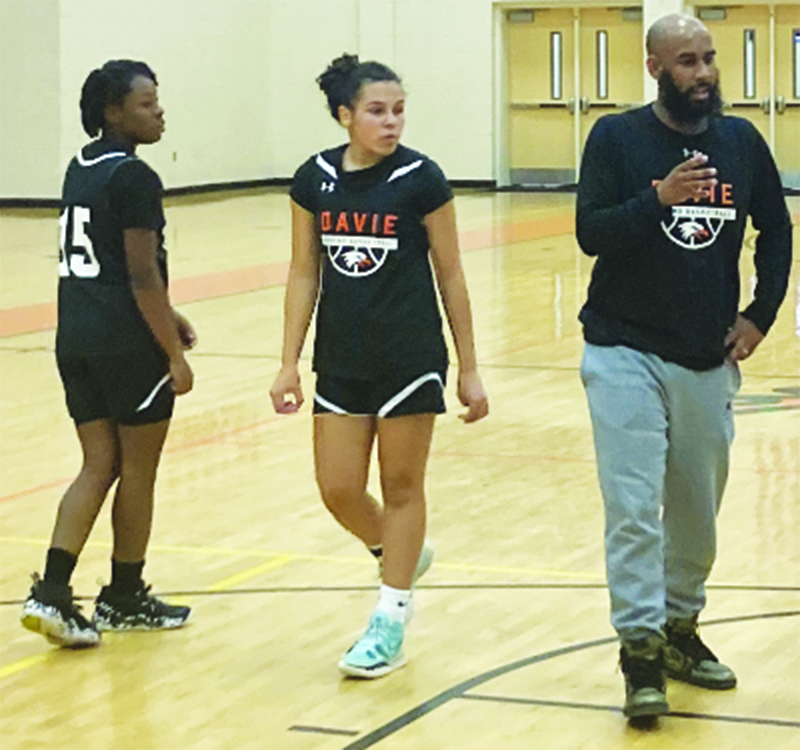 The leading scorers for last year’s JV girls basketball team are not around. Nadelie Jones is playing varsity; Kaylee Lewis decided not to play. On top of that, the foremost freshman, Bailey Aderhold, made the varsity, leaving coach Lamar Russell with just three returners from his successful first year as Davie’s JV coach.

Even though there are no proven scorers back, Russell says it’s not crazy to think Davie can get its share of wins in 2022-23.

The returners from the team that went 10-5 overall and 7-4 in the conference are Kaylee Lynch, Carleigh Croom and Tasia Tarpley.

“They learned a lot last year and they’re helping the freshmen in practice,” Russell said. “They are being amazing leaders.”

Lynch, also known as “KK,” had the most dominant rebounding season imaginable as a freshman, yanking down an average of 11.8 per game and controlling at least seven boards in all 15 games. She’s also the top returning scorer at 4.7. She is being dual-rostered, meaning she’ll dress for varsity games and sweating out JV games.

“KK’s been working out with varsity and getting stronger, so I know she’s going to get rebounds and she’s developing a shot,” Russell said. “She could be the leading rebounder and scorer this year.”

Tarpley flourished in the last three games as a freshman, scoring 30 points during that span. In one game, she had 13 points, six rebounds and six steals. Croom also peaked toward the end of her freshman season, collecting eight points and 11 rebounds in one game and following that with 10 points in the next game.

“They have gotten better since last year,” Russell said. “Carleigh is amazing at softball. She learned the game of basketball last year and she keeps getting better. They stepped up big time (in the second half of the season).”

Russell has six freshmen. Although all six are raw players, each one is athletic with big upsides.

“She’s about as tall as KK and she is strong,” he said. “Boy, she’s strong. She accidently hit me the other day when I had the pad on her back and I was trying to move her. She knocked the breath out of me and I loved every second of it. I couldn’t breathe to tell her that, but I was like: ‘Yeah, that’s what I need right there.’ If she makes a move in the post and somebody gets one of those shots from her, I bet not many girls are going to stand beside her to figure out what she’s going to do next. I know I didn’t.”

Lanah Kruger has been quite a revelation.

“We’ve had eight practices and this was her eighth day of basketball,” he said. “She’s a tall girl and she has improved so much in those eight days that I am excited to see where she’s going to be by the end of the season. I couldn’t imagine playing basketball for the first time and doing some of the things she’s already done.”

If Russell can find a few consistent scorers, he could have another fun team. Madison Lewis, Britany Hernandez, Maegan Purvis and Zariyah Conner are the other freshmen.

“Madison is athletic and I’m trying to turn her into a (multi-sport athlete),” he said. “She could get big minutes, maybe at point guard. I think she’ll do well. Britany played travel basketball for coach Adams, so she knows what to expect from us. Maegan is really quick and very coachable. Zariyah is looking good.”

“I don’t know about Hannah right now,” he said. “She may not be able to play this season. They didn’t clear her (last week) and it’s going to take 4-6 weeks to do that test again. Hannah would be huge for our team.”

Sophomore Aubrey Speckin, a late addition to the team, will be a role player.

“She hasn’t played since middle school (because of injuries and two surgeries), but she is tall and athletic,” he said. “If she can give me a few minutes off the bench, she will help a lot. If she gets comfortable and plays more, she will be another rebounder along with KK.”

Russell has managed to put together a 10-deep roster, 11 if you count McMillian. That’s impressive work when you consider a lot of programs either don’t have enough players to form a team or barely have enough.

“It seems like every day he tells me he’s got another girl playing,” Adams said. “I’m excited for how he’s building that program. It’s going to be exciting for the next two years.”

Nathan Handy was Russell’s assistant last year, but Handy was named the varsity softball coach and thus dropped basketball. Russell looked around and found 20-year-old Hope Grimes, who helped Forbush achieve staggering things from 2016-17 through 2019-20. During that time, the Falcons went 99-18 with a state runner-up finish in 2019.

“She knows basketball and she’s going to bring a whole new dynamic to JV basketball,” he said. “I couldn’t think of a better person to replace Nathan and be my assistant. I saw her play at Forbush and I really loved her game. I reached out to her sister because I used to work with her sister. Then Hope called me. This is what I needed.”