Davie football headed to Grimsley in Round 1 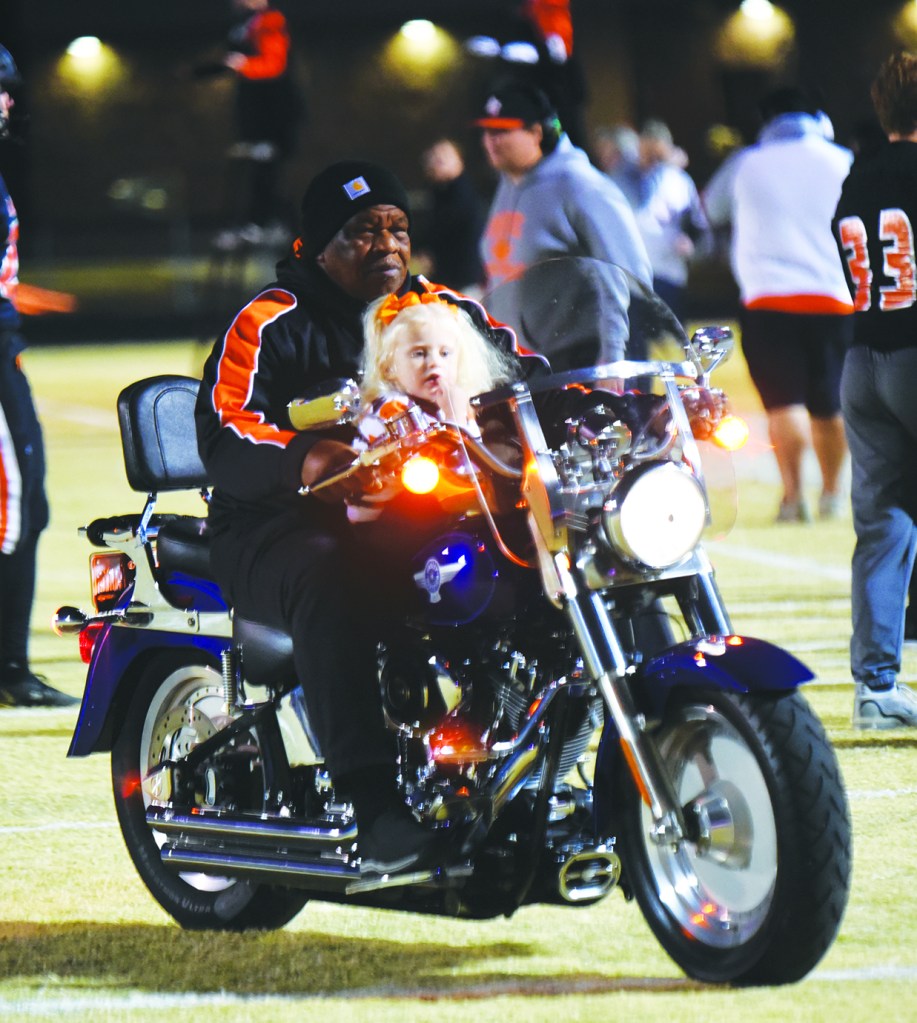 Now this, Davie football fans, is just what the War Eagles needed to close the regular season: a Central Piedmont Conference win over someone other than Reynolds, which hasn’t had a winning season since 2009, and Parkland, which has a 17-game losing streak.

The War Eagles hosted Glenn, which had never lost to Davie, on Senior Night on Oct. 28, and after a mostly listless first half offensively, they raced past the Bobcats 36-22. And the next morning, Davie got a nice surprise to boot, the 32nd and last playoff berth in the 4-A West Region.

“We wanted to make history this season. It hasn’t gone our way, so we wanted to end (the regular season) with a bang, and we had a chip on our shoulder for that reason,” said senior receiver Brodie Smith, who delivered 11 catches, including a ridiculous snag to set up the dagger touchdown.

The first half included two lengthy delays as medical personnel attended to injured Bobcats and a bunch of blah moments for Davie’s offense. Its first six possessions went punt, turnover on downs, fumble, interception, punt, punt. Glenn completely shut down the Davie run game, and while Ty Miller was completing short passes, Davie’s deepest penetration to that point was the Glenn 34.

“I think the (delays) and the unfortunate (injuries) in the first quarter made it a really choppy start for both teams,” coach Tim Devericks said.

The Bobcats took advantage of a short field to score the game’s first points. Davie lost a fumble at its own 24, and workhorse running back Brandon Sutton scored from 7 yards out. Glenn went for two after each of its touchdowns, and quarterback Mario McClure ran it in for two points to give the visitors an 8-0 lead in the first quarter.

But the War Eagles’ defense delivered its best game to date, and that unit kept Davie in contention until the offense found its rhythm. The biggest moment came when Glenn drove from its 10 to the Davie 8, where it had first-and-goal.

Glenn ran the same gadget play that had just worked for 18 yards, but this time Jerred Alexander dropped the ball carrier for a 6-yard loss. On third-and-goal from the 14, the quarterback rolled out. He couldn’t find a receiver and he was sacked 12 yards back by Mason Shermer. On fourth-and-goal from the 26, the 17th play of the drive, Shermer and Alexander got a double-team sack.

“(Alexander’s) had a heck of a season. His improvement has been phenomenal. He’s a tough block. (Shermer) likes it when it’s going sideline to sideline. That’s when he’s at his best.”

Davie’s next possession was dismal, three incompletions that had Palmer Williams punting for the third time after just 17 seconds had ticked off the clock.

But Glenn could not make Davie pay. A pair of 10-yard penalties put it in a hole and junior d-lineman Brandon Wood got a minus-6 tackle on a jet sweep to force a punt.

When Davie took over at its 42 with 1:54 remaining in the first half, it showed how quickly a game can change. Miller threw a little swing pass to running back Markel Summers for 8 yards, then threw a screen to receiver Bryan Argueta, who picked up another 8 yards. Davie couldn’t get anything established on the ground, so it pretty much abandoned that part of the game plan and went to the short passing game – dump-offs to Summers and screens to Smith and Argueta. It was nothing flashy, just workmanlike. It kept working, so why change?

“It’s really a run call,” Devericks said. “How they line up determines if we’re going to run it. Are they going to let Markel run or put more people in the box so we can throw it out here? It’s playing a numbers game.”

On fourth-and-2 from the Glenn 29, the Bobcats gave Davie a gift first down by jumping offsides. Two plays later, everything changed. Smith was wide open deep down the field – presumably busted coverage – and Miller hit him for a 24-yard TD with only :22 left in the half. Miller lowered his head and powered into the end zone on the two-point conversion to tie it 8-8.

“I don’t think we were thinking (Smith) was going to come open, but Ty did a good job of reading the defense,” Devericks said.

Once Davie’s offense shook off the sluggish start, there was no stopping it.

“I told them at halftime I was proud of them for persevering through that choppiness,” Devericks said.

On the first play of the second half, Glenn’s QB and running back botched the exchange and Wood recovered the fumble at the Glenn 19. Miller immediately went to the receiver screen, and Argueta took it 19 yards to the end zone. The key to the play was a massive block by receiver Evan York.

“I didn’t have to say much (at halftime),” Devericks said. “The defensive stop and the score at the end of the half gave them belief that they could get this (win). High school football is such a game of momentum, and we were able to seize momentum and roll with it.”

Trey’von Doulin and Shermer had tackles as Glenn was forced to punt from its own 8. Davie took over in plus territory with all the momentum. After completing four straight underneath passes, Miller handed off to Summers, who juked a defender in the open field and scored from 24 yards out.

“Ty actually faked us out because we thought he was going to throw (the screen) based on the numbers,” Devericks said.

Four plays later, Davie was right back in the end zone. Ethan Silvey intercepted a pass at the Glenn 41 and got a chance to showcase his blazing speed with a pick-6 that put the game all but out of reach at 29-8 with 7:49 left in the third quarter.

“He can fly,” Devericks said.

Is Silvey the fastest War Eagle? “Willie (Purvis) would probably argue,” Devericks said. “There would be a lot of people who would argue, but Willie and Ethan are probably neck and neck.”

Davie’s defense continued to frustrate the Bobcats. John Stokes recorded a minus-6 stop. Connor Hood foiled a pitch for minus-2, Glenn punted for the fifth time and failed to score for the ninth time in 10 possessions.

“Up front we might have had our best game of the year,” Devericks said of Doulin, Landon Barber, Hunter Dyson, Matty Warner and the whole DL. “I think Trey’von had his best game of the season. He was squeezing down and making plays. He had a lot of good plays.”

Glenn converted a tipped-pass interception (“Ty made some good, quick decisions. One unfortunate blemish was a tipped ball, which was probably going to be a touchdown if it didn’t get deflected,” Devericks said.) and Sutton’s 20-yard scamper into six points to pull within 29-14 late in the third.

But Smith and the offense answered beautifully to knock out the Bobcats. Smith ran a seam route. The defensive back clobbered him as the pass arrived. He somehow cradled it for a crazy-good, 29-yard catch at the Glenn 7.

“I felt it a little bit,” Smith said with a smile. “My head is still recovering a little bit, but that’s football. I saw it coming and I was like: ‘I’ve got to do this.’ I held on to it with all I could.”

“The catch he made – one-handed catch – was probably (defensive) pass interference if we’re being honest,” Devericks said. “He goes up and catches it with one hand against his shoulder pad.”

Three plays later, Miller threw a high fade to the end zone. Smith – you guessed it – went up to get it for a 16-yard TD that extended the margin to 36-14.

“It’s a wheel route,” Smith said. “(The DB) was playing aggressive, so he’s going to bite on the out route and Ty put a good ball up. Ty was on the whole game. When it’s in the air, it’s my ball.”

In his last game at War Eagle Stadium, Smith played like a dream: 11 catches for 113 yards. A Davie player reeled in 11-plus receptions for just the 11th time in 68 years. The 11 were a career high for Smith, who turned in his third game with double-figure catches. It was his fourth 100-yard game and the ninth and 10 TDs of his nine-game season.

Seven of Smith’s receptions were on screen plays. He credited receivers Aidan Froelich and York for their rock-solid blocking.

“That is Switch Dolphins,” he said. “We usually run Ace Dolphins, which is where Aidan is to the outside. We switched it up so Aidan has better leverage for that block. It’s basically just a screen pass. Evan and Aidan set it up perfectly and me and Bryan just had to make some people miss.”

Notes: Miller obviously had a big night, going 26 of 39 for 221 yards and three TD passes. It was his fifth 200-yard game and his third game with 20-plus completions. He marked the 11th time a Davie QB has completed 26-plus passes in a game. … The War Eagles posted their most points in six games, and they enjoyed their biggest scoring half of the season (28 second-half points). … Davie was 0-5 against Glenn, losing 62-28 in 2021. … Williams averaged 40 yards on four punts. … The key to Glenn’s offense was Sutton, who carried 34 times for 221 yards. “He’s very tough and a low-to-the-ground physical runner,” Devericks said. … Davie finished fifth in the eight-team CPC. The standings: East Forsyth 7-0, Reagan 6-1, Mt. Tabor 5-2, West Forsyth 4-3, Davie 3-4, Glenn 2-5, Reynolds 1-6, Parkland 0-7. … Smith hopes to play college football. “I have one offer right now – Shenandoah (Va.) – but I’m talking to a lot of schools like Catawba, Lenior-Rhyne, UNC Charlotte,” he said. “So there’s a chance that I’ll play (in college).” … Barber pulled double duty when right guard Kevin Lazaro was helped off the field with an ankle injury. “Landon ended up playing right guard and on the defensive line,” Devericks said. “So he sold out for the team tonight.” … The cherry on top was Purvis’ INT at the Davie 1 with a minute left.

First Round Of Playoffs

Davie, an unexpected participant in the 64-team 4-A field, will be an enormous underdog when it visits Grimsley on Friday night at 7:30.

As strange as it seems, Davie and Greensboro Grimsley were CPC rivals from 1989-92. Davie lost the first three meetings before breaking through with a 17-6 win in 1992. Interestingly enough, the quarterback on that ‘92 team was Bubba Coleman, whose son, Braddock Coleman, is a sophomore receiver for the War Eagles. That was the last Davie-Grimsley game.