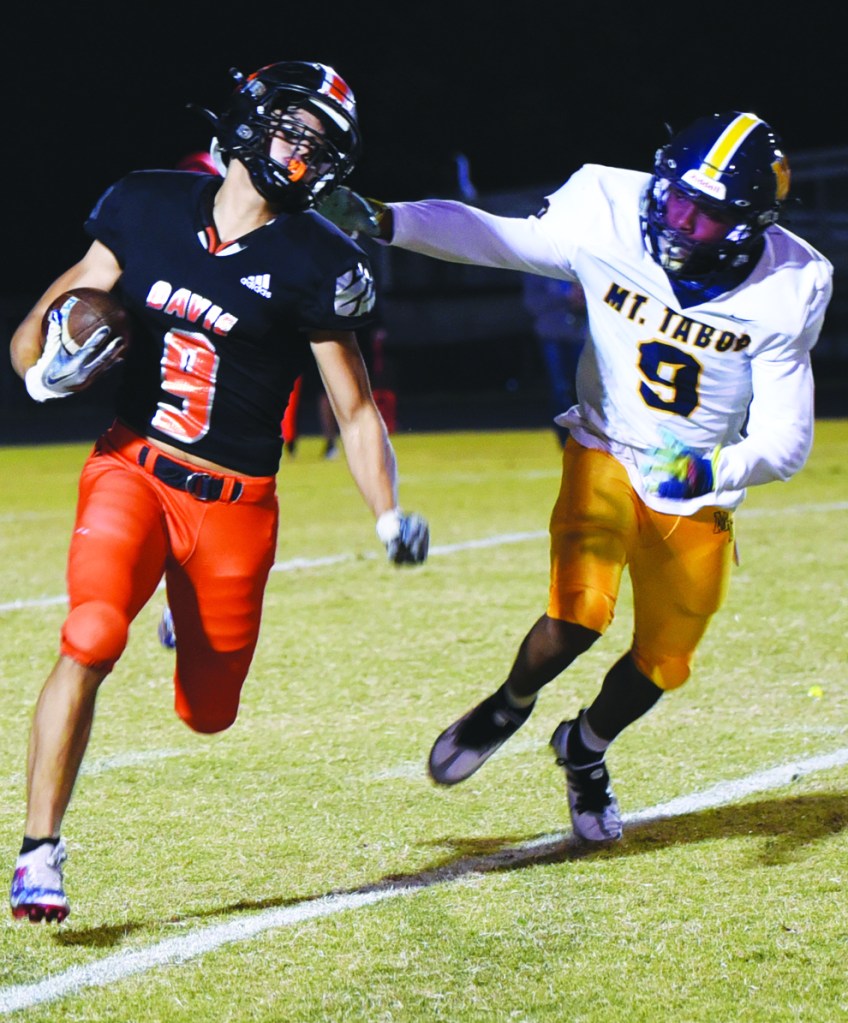 The Davie football team’s defense gave the homecoming fans some good moments and the offense found success in the second half.

But there’s a clear reason why the War Eagles have suffered three straight losses: They have faced three behemoths in East Forsyth (56-21), Reagan (41-21) and Mt. Tabor. While those three are well-oiled machines, Davie is somewhere between pouring the foundation and framing the house.

“Obviously we’re not getting the results that everyone wants – everybody wants to win – but it’s a building process,” coach Tim Devericks said after Friday’s 34-25 loss to Tabor (6-1 overall, 3-1 Central Piedmont Conference). “We’ve got to build Monday, Tuesday and Wednesday towards that goal, and they did a good job of that this week. That was unbelievable fight in our kids. Down two scores, we never gave up. The defense came up with some big stops and the offense got some momentum going. I’m super proud of our guys.”

Tabor, which opened the season by handing tradition-rich Richmond County its worst loss ever (45-6), was a heavy favorite, but it was Davie (2-5, 1-3) that scored the first points. And they came on a lightning-quick return by Willie Purvis, who took the opening kickoff 90 yards by sprinting through a huge lane of empty green grass up the middle. Ten seconds into the game, it was 7-0.

“Willie’s got dynamic speed and playmaking ability,” Devericks said of the senior cornerback/kick returner. “But he has to rely on those other 10 guys to get their blocks. They did a phenomenal job; I don’t think he got touched. It was a great way to get the game started.”

“Bryan Argueta’s block really opened up the hole,” Purvis said. “I feel like we’re one of the best special teams in the conference. With the atmosphere (for homecoming), it felt amazing, and I hope it happens again.”

Davie’s defense came out strong. Linebacker Justin Hayes stopped a quarterback draw for no gain. Purvis and Jerred Alexander tackled the running back well short of the marker on third down to force a punt on Tabor’s first possession.

It was third-and-6 on Tabor’s second offensive series. Mason Shermer had the tackle on a 3-yard run. Tabor went for it on fourth-and-3 from the Davie 35, and freshman cornerback Gavin Reese intercepted a pass at the Davie 20.

“Wonderful job of listening all week in practice of when his receiver went shallow to not chase him,” Devericks said. “Just get some depth because the running back was coming out of the backfield, and Gavin was right where he needed to be.”

Reese’s pick was the sixth and final pass for Tabor’s starting QB, senior Semaj Reaves Smith. Coach Tiesuan Brown moved sophomore Shamarius Peterkin from receiver to QB, and he changed everything. At 6-2 and 172 pounds, he’s a freak of an athlete. He looks like a young Hendon Hooker, who played for Dudley, led the Panthers to two wins over the 12-2 War Eagles in 2016 and now stars for Tennessee.

Despite not attempting a pass in the first six games, S. Peterkin performed with lethal precision as he carved up Davie with his arm and his legs. His impact began when he fielded Palmer Williams’ 49-yard punt with Davie still clinging to the 7-0 lead. He returned it 38 yards to the Davie 34. He picked up 8 and 12 yards on back-to-back keepers before Giovanni Caesar took care of the final 14 yards. Tabor went for two, but Brandon Wood sacked Peterkin to preserve a 7-6 lead.

But the Spartans simply dominated the final 13:20 of the first half, scoring on three straight possessions to build a 20-7 halftime lead. During that stretch, they didn’t even face third down, a span of 22 plays.

“(S. Peterkin’s) a dynamic playmaker,” Devericks said. “When they went that route, they just snapped it to another playmaker.”

Even though the wounded War Eagles were probably having flashbacks to East Forsyth/Reagan during the second quarter, they gave their fans good moments in the second half.

Early in the third quarter, Shermer and Landon Barber swarmed S. Peterkin for a 1-yard gain on the edge. Running back Zion Thompson caught a pass but only gained 2 yards as he was met by Ethan Silvey. S. Peterkin had a minimal gain when he was stopped by Shermer/Matty Warner. S. Peterkin took off on third-and-5, but only gained 2 yards because of a Warner tackle. On fourth-and-3 from the Davie 8, the 13th play of the drive, Warner planted Caesar 2 yards short.

“We were doing some things where they couldn’t block us all,” Devericks said.

After its offense was punchless in the first half, Davie put together a 12-play, 93-yard drive that was aided by four Tabor penalties. On third-and-5 from the Tabor 10, Ty Miller dumped a pass to a wide-open Markel Summers as Davie cut Tabor’s lead to 20-13.

Tabor answered immediately, with Thompson turning the corner and dashing 64 yards to the end zone to restore Tabor’s lead to 27-13.

“It took us a little bit to adjust (to S. Peterkin),” Devericks said. “We made some good halftime adjustments and we got some stops.”

On fourth-and-3 from the Davie 40, Miller connected with Smith near the Davie sideline. Smith juked two defenders and sped 60 yards. A two-point pass failed, but Davie was within one score (27-19) with 6:03 to play.

“We are so close,” Devericks said. “One play here or there and this is a different game. We’re just so close.”

“It was a great team effort,” Purvis said. “We didn’t give up at all.”

But wait. Davie went 63 yards in 69 seconds to make things interesting again. Miller hit 5 of 7 passes on the drive, including his second TD toss to Smith. Down by nine with 1:08 to go, Davie went for two. The pass fell incomplete and that was all she wrote.

But Devericks and the War Eagles came away hopeful as they turn their attention to archrival West Forsyth.

Tabor completely shut down Summers’ rushing attempts, but he still had a productive game with nine catches for 86 yards.

“Markel is a playmaker with the ball anywhere in his hands,” Devericks said. “When he tried to run the ball, they were loading the box, so we had to find different ways to get him the ball.”

Smith’s eight receptions for 116 yards was another illustration of what he’s all about.

“He had one (defender) who was almost on him as soon as he caught the ball (on the 60-yard TD), and he broke that tackle,” Devericks said. “For the next guy, he put his foot in the ground, cut inside and he was off to the races. He’s another kid who’s going to give you everything he’s got.”

Hayes, the senior linebacker and No. 1 tackler for the season, earned high praise.

“Extreme effort,” Devericks said. “He cares so much. I’m super proud of that guy. He’s matured so much in handling the emotions of the game. You never question his effort. If he can get to it, he’s going to go 110 miles an hour. I think he’s the heartbeat (of the defense). He sets the standard for our defense.”