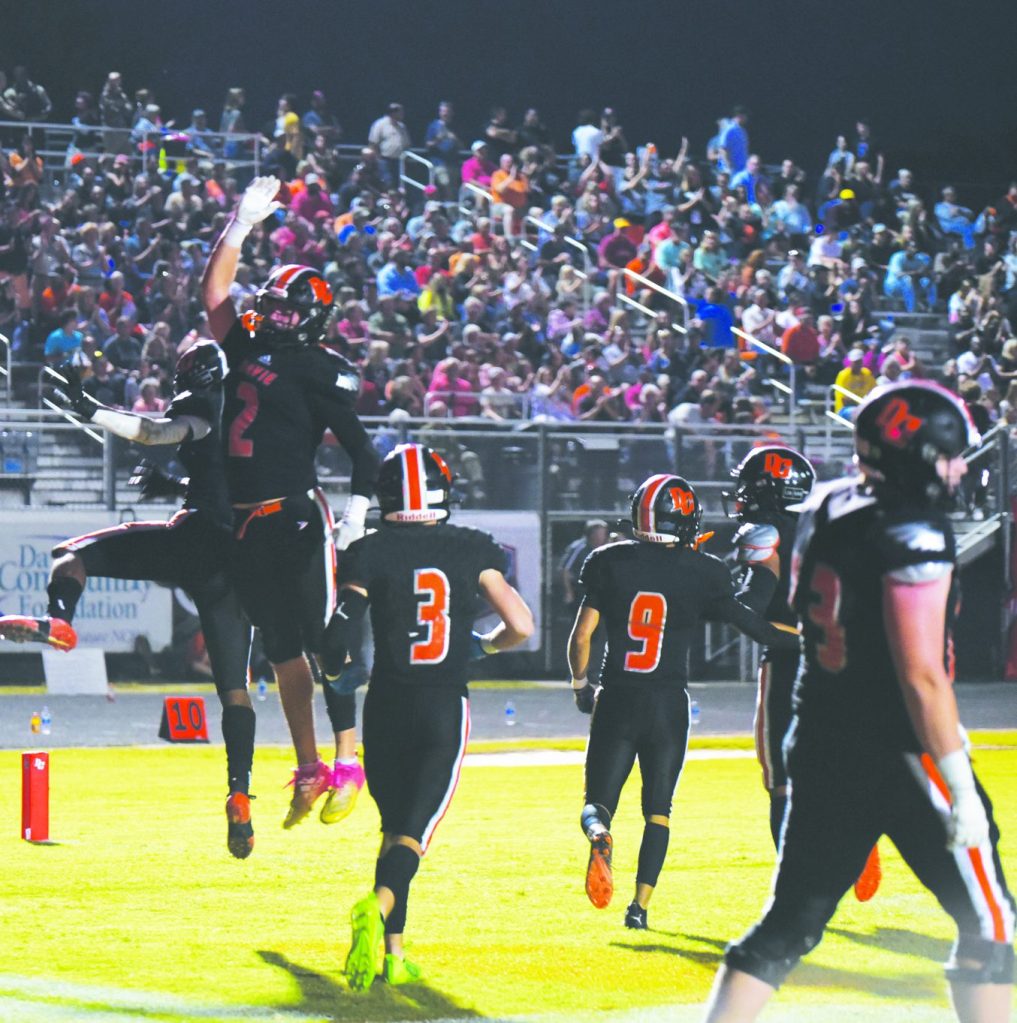 Anybody who follows high school football will tell you East Forsyth has too much of everything, and in a 56-21 manhandling of visiting Davie on Sept. 23, East had all that and more.

After winning two in a row, Davie met a cinder-block wall as East romped to 5-0 overall and 2-0 in the Central Piedmont Conference. Jayvontay Conner, a 6-4, 240-pound senior receiver, can probably tie his shoes without bending over. Jaylen Raynor, the senior quarterback, and Que Brown, a 5-9, 160-pound senior receiver, are so quick they could turn out the light and be under the covers before the room got dark. That’s the kind of physical freaks that Davie (2-3, 1-1 CPC) faced in Kernersville.

“We were trying to take something away, but then somebody else stepped up the plate,” coach Tim Devericks said. “They just have several weapons that can make dynamic plays. And when you try to take one of those weapons away, the other one stepped up tonight. They have guys who will play at a high level on Saturdays.”

In the first half, East roared to the end zone on three of its first four possessions. Raynor was 8 of 10 for 139 yards. The two incompletions: one dropped pass and one Hail Mary at the end of the half.

It was 21-0 at intermission and East was just getting rolling. In the second half, it scored TDs on five straight possessions. Raynor was sensational, rushing for 115 yards and going 19 of 23 for 246 yards while hitting seven receivers. Senior running back Trenton Dozier (13 carries for 92 yards), Conner (five carries for 62 yards on jet sweeps) and Brown (four catches for 90 yards) shared the wealth as East piled up 616 yards of offense, converted six of seven third-down tries and amassed 30 first downs. In the fourth quarter, East was bringing in considerable talent off the bench.

East did all that damage while being hindered by penalties: 13 for 136 yards.

“If you pressure (Raynor), you could corral him or you could spook him,” Devericks said. “If you spook him, it’s one cut and to the house. If you drop back (in coverage), he can run around back there and you can’t hardly cover for that long. So it was mix and match to try to keep them offbalance. But kudos to (Raynor), he made plays.”

Brown made ridiculous plays. One time when he was blanketed by a Davie defender, he elevated for a catch that left fans’ jaws dropped. On a punt return that was called back by a penalty, he hurdled a War Eagle and made remarkable cuts on the way to the end zone.

“On two passes, we couldn’t have asked for better coverage,” Devericks said. “The guy just went up and made plays.”

Despite the lopsided margin, the War Eagles did things they can build on. They scratched and clawed for 262 yards and 14 first downs. They converted six third-down situations. They sustained enough drives to snap off 64 plays (45 runs, 19 passes). Defensively, Brown’s ridiculous 45-yard catch was East’s longest play; the other 18 receptions were for 21 yards or less.

Markel Summers, Ty Miller and Brodie Smith left it all out there. Summers fought for 55 rushing yards. Miller banged out 41 rushing yards and hit 12 of 19 passes for 168 yards. Smith hauled in six catches for 72 yards, including two TDs.

“We fought hard from the first play to the last,” Devericks said. “Obviously, they’re a talented team, but we made some hay in some places. Our effort was great. We were resilient and found ways to make plays.”

Notes: Davie punter/kicker Palmer Williams, a Baylor commit, was honored last week as a 2023 All-American. He will play in the 23rd edition of the All-American Bowl in the East vs. West matchup inside the Alamodome in San Antonio, Tx., in January. The bowl will be nationally televised on NBC and will feature the nation’s top 100 high school football players. … Davie has an amazing streak going. It has scored in double figures in 49 straight games. The streak began following a 35-7 loss to East in 2017. … The War Eagles will be at home the next two games, and this week’s opponent – Reagan – figures to be the first of four serious battles. The Raiders are 3-2, 1-1. Their scores: 30-25 win over North Davidson, 40-34 loss to Grimsley, 17-14 win over Myers Park, 37-3 loss to East Forsyth and 28-26 win over Glenn. The War Eagles lead the series 8-5, but they were destroyed by Reagan last year, 52-14. Kickoff is set for Friday at 7 p.m. “(E. Forsyth) is over. We’ve got to move on to the next week,” Devericks said. “We’ll make corrections. If they keep bringing the effort, good things will happen.”