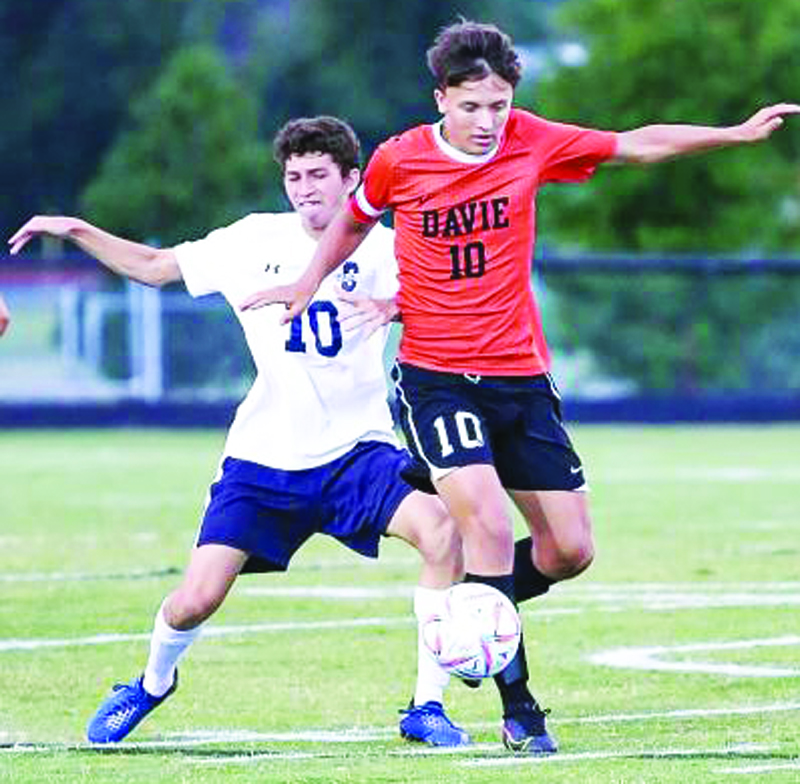 When you’re experiencing growing pains like the Davie varsity soccer team, every win is precious.

A 3-0 home nonconference win over West Rowan on Sept. 6 was significant because it matched the number of wins the past two seasons combined, a span that saw Davie go 2-28-1.

What’s more, it broke a five-game losing streak and marked the most goals in 22 games. The game was played in a steady rain.

“The guys pretty much dominated the whole game,” coach Marco Rebollar said. “We came out firing in the first 10 minutes. I was pumped for them to get that win.”

Davie did all the scoring in the first half. Peter Marks was the man of the hour with two goals. Alex Torres had the other.

“Peter was close to getting a hat trick,” Rebollar said. “He had an excellent game. I’ve been using him at center back the last three or four games, and I decided to put him up top – and it worked. He put two away, so that was awesome to see.”

“My midfield played out of their minds,” he said. “My back line played amazing.”

A. Tarbet is a versatile weapon who played center back against the Falcons (3-4), who suffered their third straight loss.

“I moved a guy we call Pepsi to center back,” Rebollar said. “He’s a guy I can use at midfield, forward, anywhere – but we think we found his home now. He’s a natural at center back. He played some fantastic balls and he’s quick.”

How did A. Tarbet get the nickname Pepsi?

“I think he drinks a Pepsi before every game,” Rebollar said. “The other day he ran up to the gas station because he had to go get a Pepsi.”

A. Tarbet and Rayas had assists.

It was just 1-0 late in the first half, but Davie (2-7 overall) didn’t have the horses to stay with visiting Reynolds in the Central Piedmont Conference opener on Sept. 7.

A goal just before halftime all but dashed Davie’s upset hopes.

“It could have been 1-0 at halftime, but they snuck one in with under two minutes to go,” he said. “I don’t think Reynolds was expecting us to be that competitive in the first half.”

Things were going reasonably well in the second half until a War Eagle was red carded. They had to play a man down the last 19 minutes, and that’s when the wheels came off.

“They were bigger and they moved the ball well,” Rebollar said. “They would work it from one side to the other.”