Hollywood or bust: Son’s I-40 trek a tombstone jackpot 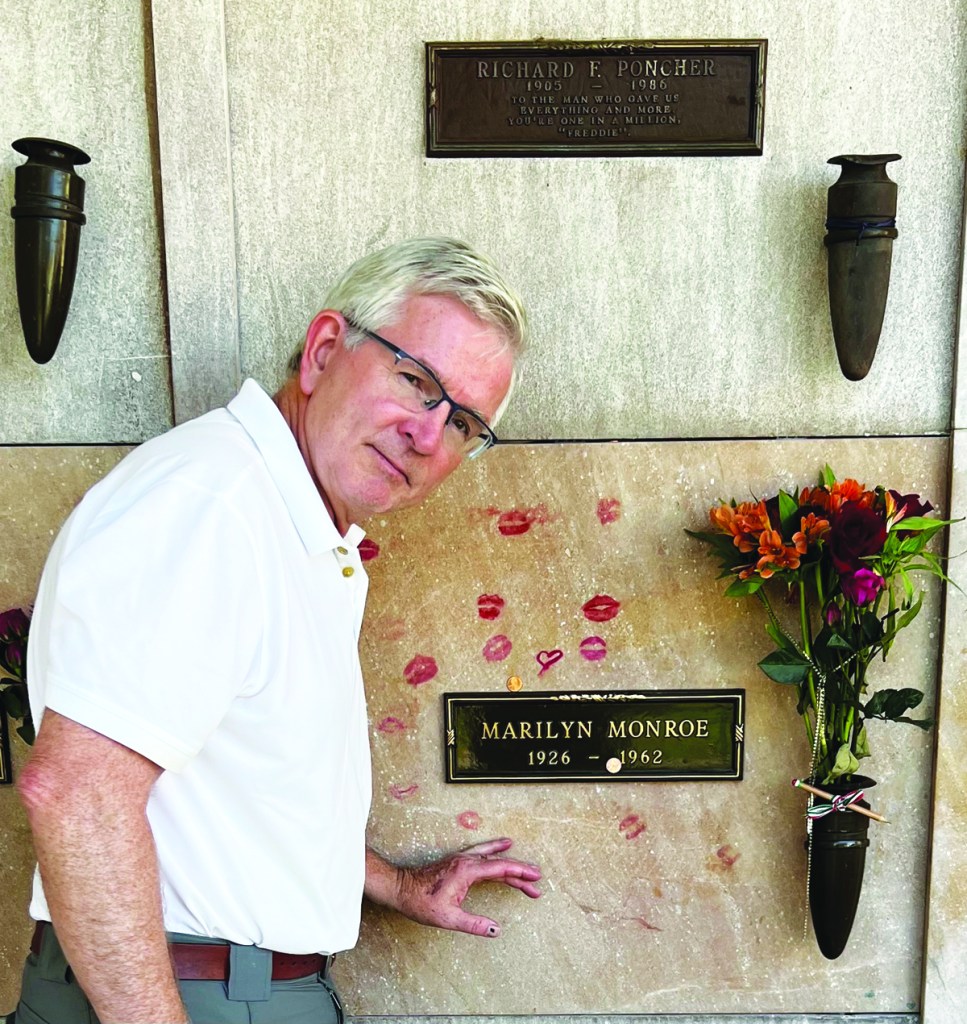 Dwight Sparks stops at the grave of Marilyn Monroe in Hollywood.

For a tombstone tourist, it was the jackpot — Ronald Reagan at dawn overlooking tranquil Simi Valley, Richard Nixon at noon in Yorba Linda, and in the evening, the biggest prize, Marilyn Monroe in Hollywood.

Lipstick marks decorated her grave along with — always — fresh flowers. She died in 1962 and is still every red-blooded man’s fantasy.

Hers is one of the most-visited graves in America.

I am back from a five day drive across America with my youngest son, depositing him in Hollywood where he dreams of being a big shot movie producer. I tried to talk him out of it. Failing that, I volunteered to be his co-pilot for the coast-to-coast length of Interstate 40.

I saw an opportunity to visit the graves of the two of the most pivotal presidents in my life.

At age 19 with a low draft number, I had been examined by Selective Service physicians in Charlotte and told to await a letter from Uncle Sam for a government-funded trip to Vietnam. While waiting, Nixon ended the draft. I forgave him that Watergate stuff.

I met Reagan in 1976 in Salisbury when he spoke atop a flatbed trailer to a small gathering in a shopping center parking lot. After seesawing politically in my youth, I found my North Star.

I’m married to a tolerant woman.

We averaged about 600 miles a day in our trip to California, sprinkling in stops along the way to keep it from being a grind.

• Nashville’s honky-tonk district for lunch and a quick tour of the Country Music Hall of Fame to see the tributes to my girls, Dolly, Loretta, Tammy and Patsy.

• The gallows at Ft. Smith, Ark., where Judge Issac Parker hanged 86 people when his 19th century court was the edge of civilization.

• The quiet dignity of the Oklahoma City bombing memorial.

• We played Carrie Underwood and Garth Brooks songs when we passed their hometowns in Oklahoma, and Merle Haggard when we entered Muskogee County.

• We counted the Native American nations — Cherokee, Powhatan, Kickapoo, Creek, Seminole, Fox, Shawnee and more — all with their own casino.

• We didn’t stop at Toad Suck, Ark., or at Lotawatah, OK. We zoomed past Eufala Inn overlooking Eufala Lake, OK.

• In Smyrna, OK, we noted the road sign: “Hitchhikers May Be Escaped Prisoners.”

• In the Texas Panhandle, we took geology lessons: Is that a wash, wadi, arroyo or gulch? A butte or a mesa?

• In tiny Groom, Tex., we stopped at an awkwardly leaning water tower and the world’s tallest cross. 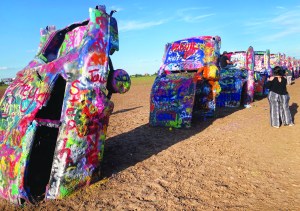 • At the Cadillac Ranch in Amarillo, Tex., people were spray-painting 10 Cadillacs buried nose-down in a field.

• We stopped for a train in Holbrook, Ariz., at the Bucket of Blood Street crossing, once the site of a deadly barroom brawl. Nearby, the historic Wigwam Motel on Route 66 still welcomes tourists.

• We stood on the corner in Winslow, Ariz., as directed by the Eagles song, “Take It Easy.”

• Skipping off hectic I-40, we drove a relaxing Route 66 free of the big rigs. We encountered the catchy Burma-Shave signs and the abandoned motels and gas stations that inspired the movie “Cars.”

• At Seligman, Ariz., we stopped at the Road Kill Cafe but lost our appetite because of the restaurant motto: “You kill it, we grill it.”

• Much of our fourth day was devoted to the Grand Canyon, a bucket list item. It lived up to its billing. We hiked a mile into the canyon to Ooo Ahh Point.

We trekked 2,739 miles from Advance to Hollywood. My hometown “rush hour” was poor preparation for Los Angeles traffic. Every highway is five-, six- seven- or eight-lanes. Expensive sports cars whip in and out of traffic at break-neck speeds. I white-knuckled the steering wheel while crisscrossing Los Angeles.

I returned home on American Airlines.

I-40 also runs west-to-east when he’s ready to return … to the good life.

Sparks is a former publisher and editor of the Enterprise Record.