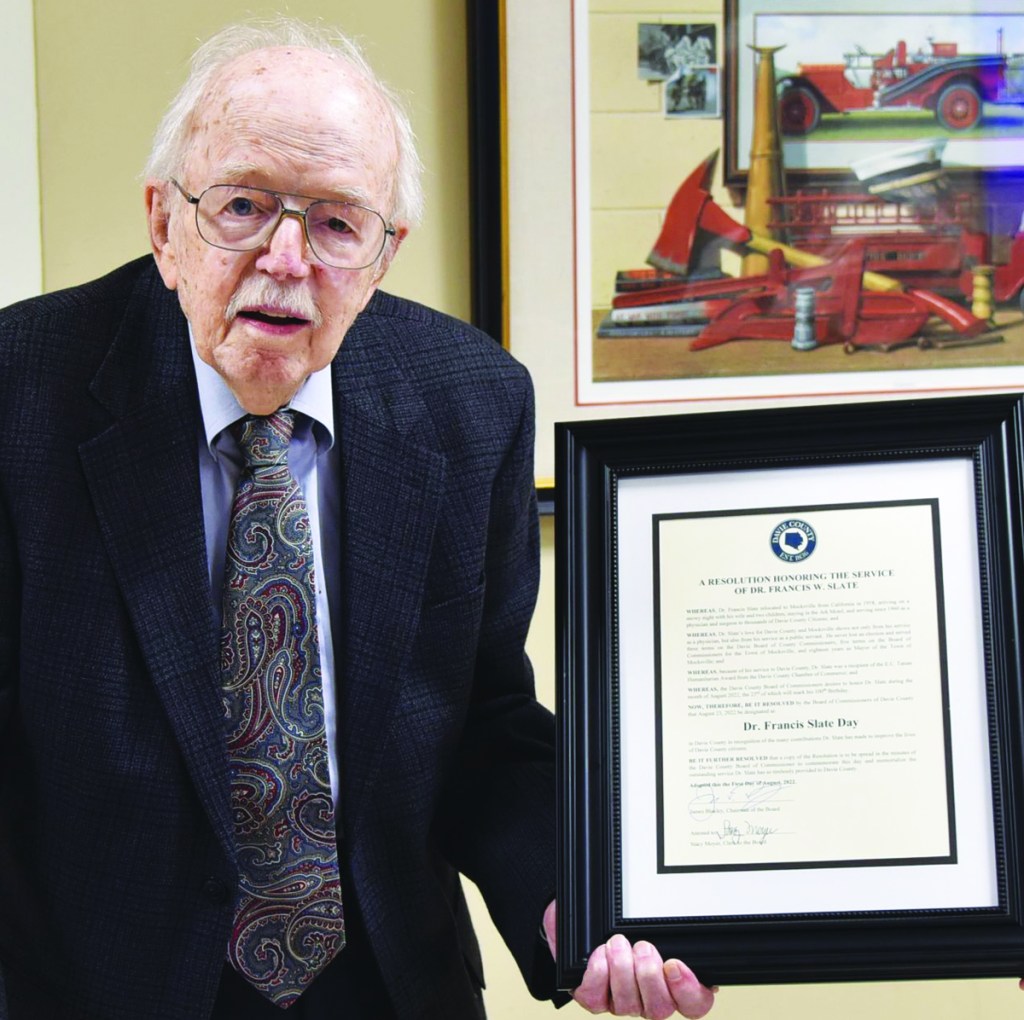 Across his 33-year career as a surgeon at Davie County Hospital, 64 years as a Davie resident and 100 years of life, Dr. Francis Slate of Mocksville has answered thousands of questions on all kinds of topics.

A question he sometimes gets is “How did you get to Davie County from South Africa?”

His answer, which adds to the mystery, is that the journey began when his parents moved from Washington, D.C. to South Africa in 1919.

His father, Joseph Slate, was born in Stokes County before moving to Kernersville as a teen. He married Jensina Hansen who he met in Washington, D.C., and they moved to South Africa when the missionary division of the Adventist Church sent him to run the printing shop in Cape Town, South Africa.

He graduated from University of Cape Town Medical School in 1947 and in 1948 married Daphne Ham, who he had met while she was in nursing school there.

Following two internships in 1948, Slate spent the next four years as a medical officer at two hospitals in South Africa. At the conclusion of the fourth year, he and Daphne discussed moving to the U.S.

When the Slates moved to the U.S. in 1952, Francis was no stranger to America because when his father went on furlough every eight years, the family, which also included his brother Bill who was born in 1925, visited family and friends in America.

“Our first trip was in 1930 when I was 8 years old. We stayed part of the time with my mother’s family on their farm in Maine. They had emigrated to the United States from Denmark,” he said.

He recalls his uncle encouraging him to drive the horse drawn hay rack. “The hay was not cut very straight where I had been,” he said.

When his family visited New York City, the Great Depression was starting. “I recall seeing sharply dressed men on the streets selling apples and pencils. I did not have much understanding of their predicament at my age then.”

His early education in South Africa was interrupted for two years due to his family’s trips to America. He jokes, “It’s probably why I never amounted to much.”

Those early childhood experiences explain why he was somewhat familiar with America when he and Daphne moved here.

After taking a graduate course in surgery at New York University in 1952-53, he did residencies in West Virginia and Washington, D.C., where daughter Jill was born in 1954.

Next, he was a surgeon at the VA Hospital in Lake City, Fla. for two years.  Daughter Moira was born there in 1955.

The Slates didn’t know it yet, but the road to Mocksville would soon be coming into view.

One day during a hospital stint in California in 1958, he saw a list of hospitals that were searching for surgeons. Davie County Hospital in Mocksville, NC was at the bottom of that list.

Intrigued because he had close relatives living in Stokes County and Kernersville, he decided to investigate the relatively new Davie County Hospital which had admitted its first patient in March of 1956. He and Daphne drove across the country to meet with Dr. Lester P. Martin and James K. Sheek, chair of the first hospital board.

Sheek told him, “You can go anywhere in North Carolina you want to go, but you won’t find a better place than Mocksville.”

Slate accepted the job, and they returned to California to get their two young daughters and pack up their belongings.

A few days later, a fierce snow storm welcomed them to their first home on Avon Street, close to both the hospital and his first office on Wilkesboro Street.

In 1959 they welcomed their son Kenneth and in 1962 built and moved into their home on North Main Street where he has lived ever since.

He established his second office in the former Meroney building in downtown Mocksville until he built his office on Hospital St., from which he retired in 1991.

His post-retirement involvement in numerous businesses and charitable organizations has added a few new titles to his resume and duplicated others including member, president, chief, chair, expert, facilitator, tutor, director, supervisor and consultant.

Slate is a “people person”. He is happiest when he is reaching out to friends and relatives to celebrate their joys or cheer them up when life has let them down.

“I feel it was my responsibility to help the people of Davie County in any way that I could. This was one of the purposes of my life,” he said.

Last year’s Covid virus protocols prevented him from going into places where he normally enjoyed bumping into people. Today he still feels safer staying at home, but he misses contact with folks he enjoyed having chance meetings with.

A trip to the grocery store was a place where he could potentially see former patients and coworkers, fellow Rotarians, or perhaps someone whose life he touched in 2008, the year he was named Special Olympics Volunteer of the Year.

Though not out in public as much as he wants to be, he is busy at home. He waters outdoor plants during these hot summer days. To his dismay, he no longer mows the grass since his family hid the keys to his riding mower a few months ago.

When indoors, he likes to read, solve Sudoku puzzles, watch TV and play games on the computer. He keeps up with local, national, and world news.

Following Daphne’s death in 2017, Jill and her husband Stokes Gatewood moved in with him.

“Doc is amazing. He still has an incredible zest for life at 100. He is a true inspiration to all,” said Stokes Gatewood.

“Daddy would be so surprised and happy to receive birthday cards from anyone who would like to congratulate him on reaching age 100 on Aug. 23,” said Jill Gatewood. 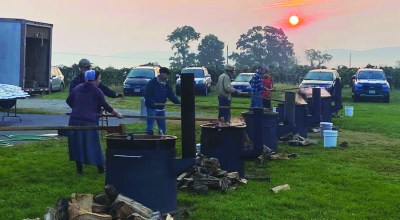 Making apple butter with the Mennonites 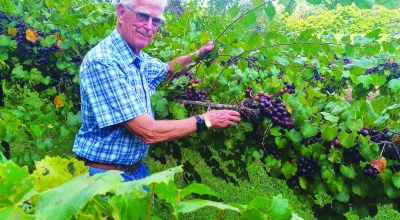 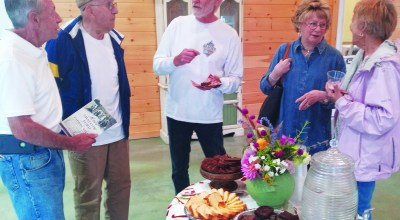