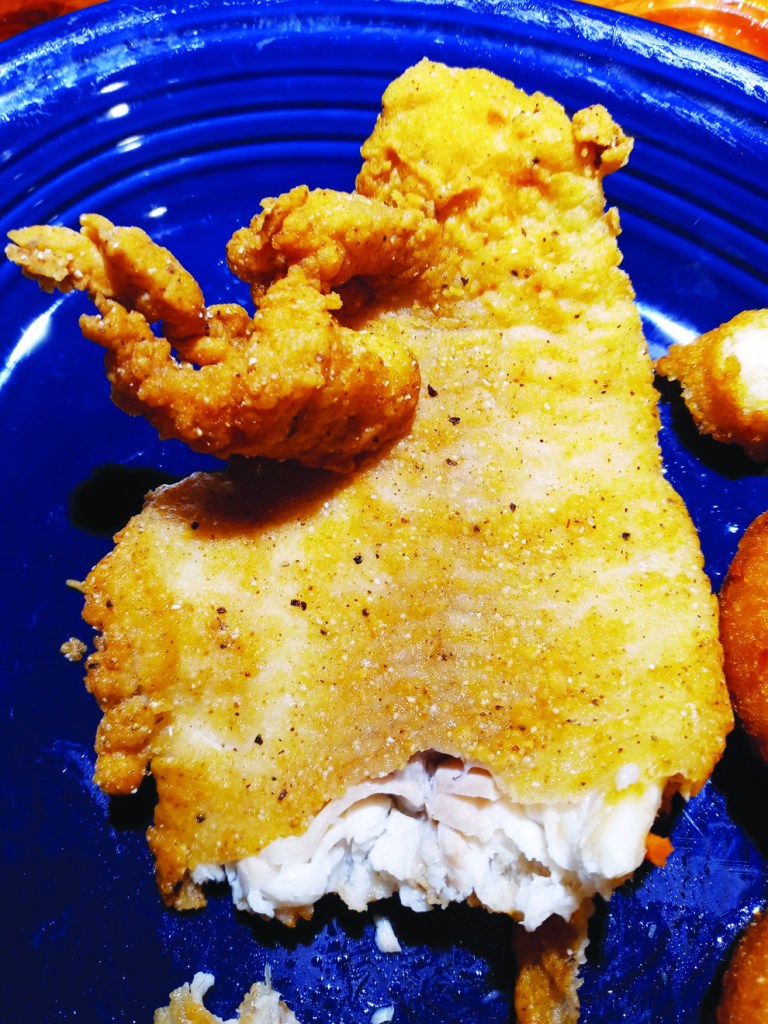 About once a month, my family members would meet at a restaurant south of Nashville called Uncle Bud’s. Some of the best, classic, southern fried catfish anywhere in the South were served at this down-home family diner.

The crispy white fish is delicious, with assorted dipping sauces. And no catfish dinner is complete without an array of complimentary southern sides. The meal is often finished off with sweet and sour tastes of a homemade, fresh citrus pie – the perfect dessert to follow a dinner of fried cats. I do love my summer seafood – even fried and with dessert – it just feels lighter.

Like other southern delicacies, catfish might be an acquired and refined taste. The good news is you can prepare any white fish fillets using these methods. And the sauces are delicious with any fish. Most cooking methods are simple. If using an oven – just open the door and stick it in. Well, it’s almost that easy.

Today’s recipes are in memory of my friend, Mike, who passed away over a month ago. I got to know Mike and his mother, Carolyn, when he rented an apartment from me. When Mike moved out, he stayed local. Whenever Carolyn came to town, they’d call me to meet up at a local restaurant that served catfish on Friday nights. I don’t think I’ll ever eat catfish again without memories of those nights – and the new friendships with which God blessed me.

Over time, every new friendship becomes old – valuable like gold. When I was a Girl Scout, we sang this old campfire song based on a poem, “Make new friends but keep the old, one is silver, and the other is gold.” Found in a 1925 Girl Scout Songbook, the first verse was sung in a round similar to Three Blind Mice.

The song encourages us to value our old friendships while continuing to make new ones. There’s value in stable relationships developed over time. A friend’s 92-year-old mother once told me, “Make and keep all the friends you can because when you get my age, you’ll need them.”

Speaking of scouting – who remembers the friendship squeeze? While in a circle, you crossed your right arm over your left and took both girls’ hands beside you. One person began the squeeze – it went around the circle, ending with the one who started it. A passing of the friendship, so to speak – a reminder that we are all connected.

Interesting to note, back in 1964, I earned a Cookie Honor badge for selling 50 boxes of Girl Scout Cookies – an accomplishment back in those days. Besides cake, cookies are my favorite sweet treat. But then again – I’m not dissing on pies.  And cookie crusts are especially tasty.

I hope you enjoy a little catfish followed by an after-dinner swash of summertime’s squeeze – that of tangy citrus – in a pie.

In each cleaned and gutted catfish, cut slits in the side. Insert fresh ginger and garlic into cuts. Coat fish evenly with sesame oil. Line baking tray with waxed paper. Set fish on waxed paper and set aside. In a shallow dish, pour the milk. In a bowl, add the flour, salt, and pepper. In an electric skillet or deep fryer, heat oil to 350 degrees. Dip each catfish into the milk to evenly coat and dredge in seasoned flour. Place catfish in the hot oil and fry for 4 minutes and turn. Fry for about 4 minutes or until golden brown and fish flakes easily with fork when tested. Drain on paper towels.

In a saucepan, melt butter. Saute onion and garlic until translucent. Add rice and wine. Bring to a simmer while stirring for 5 minutes or until wine is absorbed. Adding ½ cup at a time, alternate chicken broth and tomato juice and add to the rice while frequently stirring until liquid is absorbed for 35 or more minutes. Season to taste with salt and pepper. Serve hot. Garnish with chopped fresh basil.

In a pot, cook rice in broth for 20 minutes. Drain rice well. Gently stir in avocado, chopped cilantro, salt, and pepper to taste.

In a dish, combine milk and mustard. Mix well. In another dish, add chopped pecans. Prepare fish fillets and dry with paper towels. Dip fish into mustard mixture. Roll in pecans until evenly coated and shake off any excess. Place on a greased baking sheet. Bake in a 450-degree oven for 20 minutes or until fish flakes when tested with a fork.

In a shallow bowl, combine flour, cornmeal, cayenne pepper, salt, and black pepper. In another bowl, combine buttermilk, sour cream, hot sauce, mustard, egg yolks, salt, and pepper. Mix well. Dip catfish fillets in buttermilk mixture and drain off any excess. Dredge fillets in flour mixture until coated evenly. Place on a waxed paper-lined baking tray. Rinse catfish fillets and pat dry with paper towels. Add ½-inch peanut oil to skillet and heat to 350 degrees on a deep-fry thermometer. Fry two fish at a time for 3 minutes on each side until golden brown. Drain on paper towels. When serving, top with spoon of sauce on top.

For catfish, heat ½-inch oil in skillet, until it registers 350 degrees. Rinse fillets and pat dry with paper towels. In 3 shallow dishes, add flour, beaten egg, and sesame seeds, one in each dish. Dredge fillets in flour. Dip fillets in egg and then coat with sesame seeds. One fillet at a time, place in hot oil and cook 3 minutes on each side until fish flakes easily when tested with fork. Drain on paper towels. For sauce, in a saucepan, combine soy sauce, sugar, wine, ginger, and garlic. Bring to a boil, reduce heat and simmer 2 minutes. Strain and cool.

Prepare all vegetables in a large bowl. For the dressing, in a bowl, mix vinegar, sugar, water, chili paste, and oil. Blend well. Pour dressing over vegetables and toss until vegetables are well coated.

In a 13 x 9 baking dish, melt butter in a 400-degree oven. Remove when melted. In a plastic bag, combine cornmeal, flour, cheese, paprika, and pepper. One at a time, add fillet and gently shake to coat with the mixture. Arrange fish in single layer in the melted butter. Turn to coat evenly with the butter. Sprinkle leftover cheese mixture over fish. Bake in a 400-degree oven for 15 minutes or until fish flakes when tested and golden brown.

In a bowl, combine apples, oranges, raisins, and fennel. Add pickling juice from a jar of store-bought pickles. Mix well.

Prepare fish and set aside. In a bowl, combine teriyaki sauce, wasabi, rice vinegar, and vinegar. Allow marinade to sit for 15 minutes to allow flavors to blend. For the cucumber sauce, combine 1 Tbsp. of the marinade, chopped cucumbers, and sour cream. Refrigerate. For the fish, brush both sides of catfish with remaining teriyaki marinade. Place on a greased baking sheet and broil 4-inches from heat source for 7 minutes. When ready to serve, top with a dollop of cucumber sauce. Garnish with chopped cilantro.

In top of double boiler, combine sugar, flour, and salt. Add water and lime juice. Cook over hot water while constantly stirring until thickened and smooth. You can tint with a little green cake gel coloring if desired. In a mixer bowl beat egg yolks. Add yolks to the lime mixture. Cover and continue to cook for 15 minutes. Stir in butter and grated lime rind. Cool completely and pour into baked pie shell. In a mixer bowl, beat egg whites until foamy. Gradually add ¼ cup sugar. Beat until stiff. Fold in grated coconut. Top filling with the mixture and swirl the top with your finger. Bake in a 325-degree oven for 20 minutes or browned. Sweet cookie crusts are great with citrus pies.

In a saucepan, combine sugar, cornstarch and salt. While stirring, gradually add hot water and cook 8 minutes or until thickened and clear. Remove from heat. In a mixer, beat eggs. Stir ¼ cup of hot mixture into beaten eggs. Pour all back into the saucepan and continue to cook on medium heat while stirring for 6 minutes. Remove from heat and stir in lemon juice, grated lemon peel, and butter. Mix well. Cool completely and pour into baked pie shell. For meringue, in a mixer bowl, combine egg whites and lemon juice. Beat until soft peaks form. Gradually add sugar while beating. Continue beating until whites form firm and glossy peaks. Spread over filling evenly and sealing sides at crust. Bake in a 400-degree oven for 7-10 minutes or until browned.

In a saucepan, combine sugar and cornstarch. Gradually stir in milk. Gradually heat and bring to boil for 2 minutes while constantly stirring. Remove from heat. In a mixer bowl, beat egg yolks. Stir a small amount of hot milk mixture into egg yolks to warm them. Gradually pour egg yolks into saucepan with milk while constantly stirring and cook for 2 minutes and thickened. Remove from heat and fold in vanilla and coconut. Pour into pie shell. For the meringue, in a mixer bowl, beat egg whites until soft peaks form. Beat in sugar a little at a time until stiff peaks form. Spread meringue evenly over top and seal edges. Bake in a 350-degree oven for 12-15 minutes until top is golden. Allow to stand to cool.