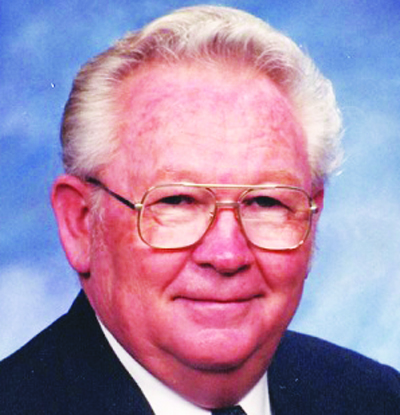 Born Jan. 24, 1931 in Davie County to Ogden Gray McClamrock and Flossie Virginia Landreth McClamrock, he was the third generation on the McClamrock Farm on Main Church Road.

He graduated from Mocksville High School in 1949, attended Coyne Radio School in Chicago for a year, and worked for Western Electric until his retirement in 1986. He also served in the U.S. Army National Guard in the 1950s Korean Conflict. During his early years at Western Electric, he studied engineering courses through NC State College Extension classes at night for five years. He advanced through engineering and management achieving Senior Machine Development Engineer and Level 4 Supervisor. He was recognized for his numerous patents and published technical articles. He was instrumental in the development and production of the Nike Ajac guided missile control system proven in White Sands, N.M., the first cellular telephone system developed in Oak Park, Ill., and the first fully automated production line for carbon resistors. He was also a pioneer in the development and publication of a company wide program to recruit, train, and retain technical employees which was soon adopted and used by other industries.

Grady, also known as “Grady Sr.”, “The Original Grady”, and sometimes, “Buddy”, was born at home and lived during the Great Depression with 5 siblings and had experienced being cold and hungry. Surviving those harsh times required the love and support of good parents, teamwork, and a lot of hard work and determination. He exemplified the McClamrock trait of hard work and striving for perfection in all he set out to do. He had a multitude of interests, including raising all types of birds, tropical fish, and cows and won awards for his parakeets. He bought, renovated, sold, and leased many homes and enjoyed the challenges of maintaining and managing rental property. When the construction of Interstate 40 split the family farm in 1966, he bought the northern portion from his parents and built his home there where he resided until his death. He did a lot of the work himself, including making the kitchen cabinets, dining room, and living room furniture and stonework. He was especially happy enjoying his back porch with the tranquil view of the geese on the lake and cows grazing in the pasture. He loved the family farm and serenity it brought him and worked with his son, Grady Jr., in keeping the farm productive and in the family. He was happiest when he could take something old, shabby, or broken and with a lot of hard work and patience turn it in to something beautiful and useful.

Grady loved and was a member of Oak Grove United Methodist Church since childhood, served on many boards and committees, and was generous to his church with his time and resources. He was also active at Lewisville Methodist Church, Lewisville Civic Club, Dutchman Creek Watershed District, and Mocksville Masonic Lodge #134. He was also a significant benefactor of the Davie Community Foundation with the Cognition facility named in his honor.

Grady married Sylvia Jo Gentry in 1951 and was father of Grady Lee McClamrock Jr. (Cathy) of Mocksville, and Larry Joe “Buddy” McClamrock of Raleigh. Grady married Lucy Shaffer Allen in 1991 who remained a loving and devoted helpmate and partner in the real estate business. They enjoyed many years of traveling to France, Panama, Alaska, and many states in America. In his declining years, Lucy took special care of him that insured that he was able to remain at home until very near his death.

In addition to his parents, he was preceded in death by: his siblings, William Raymond McClamrock, Pauline McClamrock Vaughn, Ethel McClamrock Myers, and Mary Nell McClamrock Conrad.

A funeral service will be conducted at 11 a.m. Saturday, Aug. 6 at Oak Grove United Methodist Church with Rev. Bob Summers officiating. Interment will follow  in the church cemetery joining his parents. The family will receive friends from 6-8 p.m., Friday, Aug. 5 at Eaton Funeral Home.