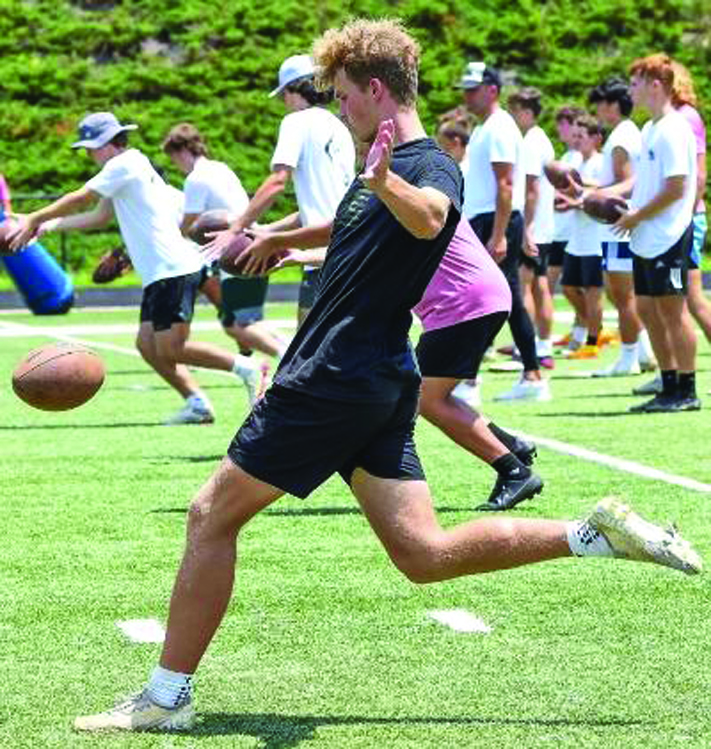 Last spring for the Davie track & field team, Spencer Williams did stuff that was utterly beyond belief.

Spencer has a younger brother named Palmer Williams, a rising senior who is the No. 1-ranked punter in the Class of 2023.

Let’s think about that for a moment. Spencer won back-to-back state championships in the shot put, broke numerous state records and is headed to North Carolina on a track scholarship.

And Palmer is at the top of the list among punters in the rankings on Chrissailerkicking.com, and a month ago he accepted a scholarship offer from Baylor. Yep, the Williams brothers are flying high.

“Seeing (Spencer’s) success and all the work pay off made me want to keep on going,” Palmer said. “He definitely kept me inspired.”

“I’ve made a pretty big jump,” Palmer said. “I was sixth in the country and I was second for a really long time. I recently got bumped up to first. There was one guy who had been first for years and I finally beat him out. The ranking is purely based on what you do at camps. There was an invitation-only camp in Los Angeles. We had a three-day camp and they evaluated you the whole time. They charted every kick, everything was on video and they used all that stuff to get the rankings.”

Needless to say, Williams has had a busy offseason.

David Wooldridge’s Davie record for punting average (43.2 yards in 2001) has stood for two decades, but it could get challenged this fall.

“For me a good punt is 47 yards with 4.7 hang time,” Williams said. “That’s how I got my scholarship to Baylor. You’ve got to be a consistent 47 and 4.7 and your mishit has got to be decent enough to where they can cover it. This whole summer I’ve been doing really well. A lot of the college guys want you to turn over 65-70 percent of the punts, and I’ve been turning over 80 percent in the past month.”

What is Williams looking to accomplish when he tries a coffin-corner punt?

Williams had four offers in all, with UConn, Air Force and West Point also pursuing the rising senior. Baylor offered in late June and he accepted July 2.

“With specialists, you don’t really want to sit on it too much,” he said. “If they offer you a full scholarship, they want to know within a week, so I took about a week to think about it and accepted it.”

Baylor captured Big 12 championships in 2013, 2014 and 2021. To get an opportunity to play for a Power 5 program was attractive, no doubt, but it’s much more than that to Williams, who will do kickoffs as well as punts at Baylor.

“I’ll get to play at a school that just won the Big 12 championship, but the big thing is the coaches,” he said. “I have a coach I work with from Charlotte and coaches from Baylor called him every week to see how I was doing. They’ve always been rooting for me. You want to play for a staff that really wants to see you succeed and really like you as a person over a player. Obviously you’ve got to be really good, but they value person over player.”

Last year as a junior, Williams converted 54 of 56 extra points and nailed 2 of 3 field goals, including a 47-yarder. He averaged 34 yards on his punts, with a long of 56. Another Wooldridge record is within Williams’ range if the opportunity presents itself. The longest Davie field goal ever was Wooldridge’s 50-yarder in 2000.

“My field goals are looking super good,” Williams said. “It’s different in college because you’ve got to kick off the ground. I kick off a block in high school and I’ll probably have 60-yard range. I think anything inside 60 is fair game, especially with a tee. Consistency in my kickoffs has gotten a lot better, too.”

A plus is the chemistry between the snapper/holder/kicker.

“I know my holder is going to be Coy James because he did it last year, and I’m hoping Justin Hayes will be my snapper,” he said.