Tomato Soup Cake? You can’t always go by the name in recipes 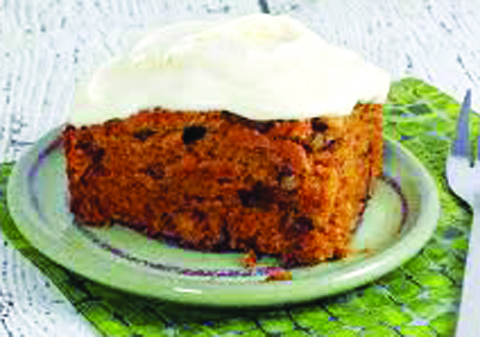 There are a few rules for naming recipes.

A book published in 1920, “The Art of Naming Dishes on Bills of Fare,” provides a few instructions. The book originated with author L. Schumacher’s dismay over food choices on menus – and a dish’s nondescript name. The author notes his rules for naming dishes in one chapter.

I found this interesting as I often adapt, edit, and rename outdated vintage recipes. Some recipes beg to be renamed – like Tomato Soup Cake. Yeah. Where does one go from there? What’s the icing on that cake?

What’s in a name?

Let’s examine the recommendations for naming a dish. First, the author suggests considering two factors. One is to mention the main ingredient, such as meat, vegetable, or fruit. Two, note how the dish is prepared, such as using the word “baked.”

One exception is when a dish has a name that already includes a preparation style – such as fricassee. In this case, the meaning is already understood. Secondary words would follow that include personal or geographical names. And remember, if you rename a recipe, it’s important not to render the dish culturally neutral. You can be creative but continue to honor the dish’s roots.

We’ve all heard Shakespeare’s Romeo and Juliet phrase, “What’s in a name? That which we call a rose by any other name would smell as sweet.” That quote doesn’t pass the sniff test regarding recipe names. When we call a cake by this name – Tomato Soup Cake – it certainly doesn’t smell very sweet.

I don’t know about you, but I can taste recipes when reading them. The title itself has the power to lure my attention to read it – or not. When I read Tomato Soup Cake, I will turn the page fast. The idea of adding condensed tomato soup to a cake recipe turns my stomach. But if we follow the recommended rules for renaming that recipe – we might end up with a Tomato Spice Cake. Now slightly more palatable, I might give this recipe a second glance.

Mostly, what we name something isn’t usually important – the essence stays the same regardless of the name. But names were of great importance in Biblical times. When referring to God – He goes by many different names in the Bible – over 63 in scripture. Each name has great importance and meaning. In the Old Testament, the word for name means “individual mark” and describes a person’s essence. In the New Testament, the word for name comes from a verb that means “to know.” The names of God describe His qualities and character. His names are filled with promises – gifts given to us by God so we can truly know Him.

In Psalm 9:10, David spoke these words following a victory, “Those who know your name will trust in you, for you, Lord, have never forsaken those who seek you.”

Unlike a name for a recipe that can change – the names of God, His character, and qualities will never change. And neither will His promises. His names and ways are endless – like He is.

In a mixer bowl, beat eggs. Add sugar and mix well. Beat in flour, soda, and salt while alternating with milk and vanilla. Mix well. Fold in pineapple and mix well. Bake in a well-greased and floured 9 x 13 cake pan in a 350-degree oven for 25-35 minutes.

In a mixer bowl, cream shortening until fluffy. Add sugar and mix well. Beat in eggs, one at a time, beating well after each addition. Beat in flour, baking powder, soda, and spices while alternating with water and soup. Mix well. Bake in well-greased and floured 2 round cake pans, 9 x 13, or tube pan in a 350-degree oven for 35 minutes for layer or 9 x 13 or 50-60 minutes for tube cake. Allow to stand in pan 10 minutes before removing. Sprinkle with confectioners sugar or frost with cream cheese icing.

Bake cake according to box instructions. After removing from oven, while still hot, pierce top of cake all over with fork. Pour condensed milk over cake and allow to stand until milk has penetrated cake. Spread crushed pineapple over cake. Allow to stand until cake is cool. Top with Cool Whip and sprinkle with coconut.

In a mixer bowl, sift together sugar, flour, cocoa, baking soda, and salt. Add mayonnaise, water, and vanilla. Stir and beat one minute. Bake in two well-greased and floured cake pans in a 350-degree oven for 25-30 minutes or until tests done. Frost with your choice icing between layers and on top.

In a mixer bowl, beat eggs. Add fruit cocktail, cake mix (without pudding), and coconut. Mix well for 2 minutes. Pour into a well-greased and floured 9 x 13 pan. Sprinkle top with brown sugar. Bake in a 325-degree oven for 45 minutes or until tests done. For icing, in a pan, bring butter, sugar, and milk to a boil. Remove from heat and stir in nuts and coconut. Spoon over cake while still hot.

For the cake, in a bowl, beat eggs. By hand, beat in cake mix while alternating with oil. Fold in cherry pie filling and mix well. Bake in a well-greased and floured 13 x 9 cake pan in a 350-degree oven. (Switch: use white cake mix and apple pie filling as an alternative.)

For the icing, in a saucepan, combine butter, milk, sugar, and marshmallows. Bring to a boil for 5 minutes. Remove from heat and stir in chips and vanilla. (Switch: use butterscotch chips for caramel icing for white/apple cake as an alternative.)

In a mixer bowl, cream butter. Beat in sugar and mix well. Beat in eggs, one at a time, beating well after each addition. Add flour, cocoa, baking soda, powder, and salt while alternating with water and vanilla. Mix well. Fold in chopped sauerkraut. Beat until smooth. Bake in well-greased and floured cake pans in a 350-degree oven for 25-30 minutes or until tests done. Cool 10 minutes and turn out. Frost with Mocha Whipping Cream. After frosting, store refrigerator until ready to serve.

Before cake is to be served, in a mixer bowl, whip the whipping cream until stiff peaks form. Mix in sugar, coffee, and rum. Frost cake and serve right away.

In a double boiler, combine milk, cornstarch, sugar, and salt. Mix well and cook while stirring until custard thickens. Stir in vanilla. Remove from heat. Break sponge cake into small pieces. Line a large mixing bowl with waxed paper. Starting with cake, layer the cake and custard until bowl is full. Place a dish over top. Refrigerate overnight. When ready to serve, whip the cream and cut cherries in half and spread on paper towels to absorb juice. Turn bowl over onto a serving place. Ice with whipped cream and cherries.

In a mixer bowl, cream shortening until fluffy. Add sugar and mix well. Beat in eggs, one at a time, beating well after each addition. Beat in flour and soda while alternating with buttermilk. Mix well. Fold in avocados, dates, nuts, and raisins. Mix well Bake in well-greased and floured 9-inch cake pans in a 350-degree oven for 1 hour or tests done. Frost with cream cheese frosting.

In a mixer bowl, beat eggs. Add sugar and mix well. Beat in flour and spices while alternating with oil and baby food. Mix well. Fold in nuts. Bake in a well-greased and floured tube pan in a 325-degree oven for 1 hour and 15 minutes or until tests done. Cool 10 minutes and turn out. For a glaze, combine fresh juice of ½ lemon and 2 cups powdered sugar.

In a mixer bowl, beat eggs. Add cake mix and pudding while alternating with water and oil. Pour into a greased and floured 13 x 9 baking pan. Bake in a 350-degree oven for 40-45 minutes. Cool. Dissolve gelatin according to directions on package. Poke holes in cake with fork. Pour warm gelatin over cake. Chill 4 hours. Spread whipped topping over cake.

In a bowl, combine flour, sugar, cocoa, soda, and salt. Mix and pour into a well-greased 9 x 9 baking pan. Form 3 holes in the dry ingredients. Pour oil, vinegar, and vanilla, one in each separate hole. Pour water over all. Mix well with a fork. Do not beat. Bake in a 350-degree oven for 30 minutes. Frost in pan while cake is still warm.

For icing, in a saucepan, melt butter and add sugar, milk, butter, flour, coconut, and nuts. Cook until thickened. Fold in vanilla. Spread on warmed cake.