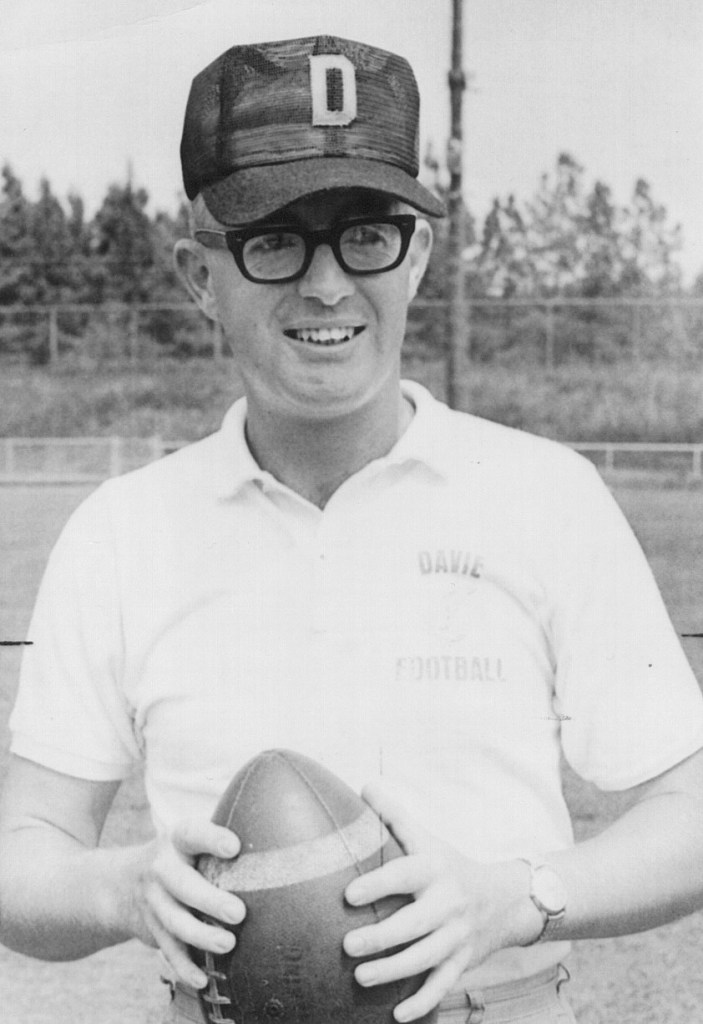 This week we remember two young men who died much too soon.

Following their deaths, their families and the Davie community contributed to a scholarship to remember them and invest in future generations. Two Davie students are preparing to leave for college with one of those investments from their respective scholarship. Following are the information cards included with the student scholarship contracts.

We believe young people need to know something about those who chose to invest in them.

Spurgeon Goss was a remarkable athlete and a courageous soldier.

At home, Spurgeon was known as a great football player; he was named All Conference and Most Outstanding Lineman, achievements made all the more notable when taking into account his size of 5’8” and 145 pounds.  Spurgeon displayed the ultimate in sportsmanship on the field and led his teammates as co-captain of the 1964 Davie High football team.

After high school, Spurgeon served his country in the U.S. Marine Corps. In 1967, he was responsible for the rescue of six Marines who were trapped behind enemy lines. He was mortally wounded by hostile military action on the battlefield. By protecting his fellow soldiers, he became the first Davie County native to lose his life in the Vietnam War.

Goss was awarded the Bronze Star with a Combat “V” posthumously for his heroic actions on that day, and he was awarded a special place in the heart of every person in Davie County.

Goss also received the Purple Heart, National Defense Medal, two Republic of Vietnam Medals, Vietnam Service Medal, and the Expert Marksmanship Badge for his service and bravery. He was a man of great integrity and honor who will not be forgotten. In the true spirit of Goss, not wanting to leave anyone behind, the scholarship will help ensure a student has the opportunity for higher education.

Davie High School was ready to initiate a tennis program but had no coach.

Principal Jack Ward approached one of his youngest faculty members and asked him to be the tennis coach. The young man was not even a tennis player, but he was one to accept a challenge. He researched and read everything he could find about the game and its fundamentals. With patience, he shared the knowledge he had acquired from study with the youth wanting to be tennis players.

He launched an almost unbelievable tennis program. In the spring of 1976, the Davie High boys won the North Piedmont Conference Tennis Championship. Jim Tutterow was named the “Conference Tennis Coach of the Year.”

No one ever lived that had any more heart or greater will than Jim Tutterow. Knowing that he was the victim of cancer, an illness from which few escape, he devoted his full resources and energy to teaching, coaching, and helping others. The popularity of the game of tennis in Davie County and the expanded number of courts is a tribute to the heart and will of Jim Tutterow.

He was not only a history teacher, he was an historian. He taught his students far more than one could ever find in a history book He researched and wrote a complete history of his church and community. He was an assistant historian for the county. He was active in community activities, always working and striving to make life better for others. His contagious smile always made a sad day brighter.

Life is not measured, or should not be, merely in years of existence. Instead, life should be valued on what it accomplished, on the contributions to the betterment of mankind, on the inspiration it offers for others. Thus was the life of Jim Tutterow. He continues to help and inspire others through the scholarship in his memory.