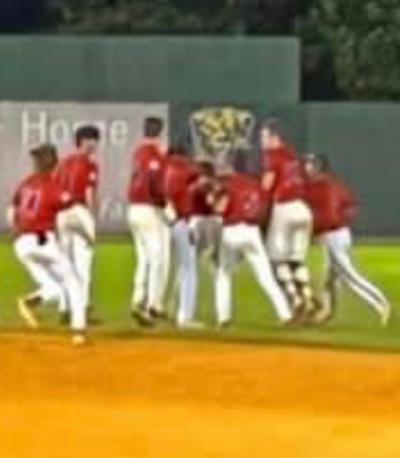 The Mocksville Senior Legion baseball team is accustomed to picking itself up after being knocked down.

It has suffered four-, six- and three-game losing streaks, but every time you’re ready to write off Post 174, its gets up, dusts itself off and grits its teeth.

Mocksville hosted Mooresville June 24. Dan Loyd found a phone booth, put on a cape and tights and carried his team to a 7-5 victory.

“Dan hit in the clutch. He was the man,” coach Charles Kurfees said of his No. 3 batter’s five-RBI performance. “It was a big win. Any win is a big win in this league. They get knocked down on the mat and they get back up and come back the next game. They could have easily folded and quit. If it was easy, everybody would be doing it. American Legion baseball is for the guys who love the game.”

The Moors scored an unearned run in the top of the first. They could have gotten more if it weren’t for a 3-6-1 double play that Loyd started and pitcher Cole Whitaker completed by hustling over to cover first.

Mocksville (7-13, 4-4 Southern Division) answered in the bottom of the first. Loyd’s single knocked in Parker Aderhold, and Ryan Thiel followed with a hit as Mocksville took a 2-1 lead.

Whitaker escaped trouble in the top of the second. With runners at second and third and one out, he wiggled off the hook with a strikeout looking and a popup to third baseman Hunter Daywalt. Mocksville loaded the bases in the second – Lawrence Hancock, Aderhold and Blake Little were the baserunners – but failed to score.

Mooresville grabbed the lead in the third, scoring two runs on an error and 2 hits. It bumped its lead to 4-2 in the fourth, when 3 walks and an error aided the Moors.

Mocksville scored five of the last six runs as Loyd stole the show. In the fourth, Hancock, Parker Simmons and Aderhold had singles to load the bases. After Mooresville got a strikeout, Loyd stepped in with two outs. He rifled a bases-clearing double off the left-center wall to give his team a 5-4 lead. “He almost had a grand slam,” Kurfees said.

In the fifth, Whitaker got an inning-ending K with the tying run at third. In the sixth, Mooresville doubled off reliever Jackson Sink, but Sink got the next two and Aderhold got the third out in spectacular fashion. He came charging in and made a diving catch.  “Aderhold made two really big plays in center field,” Kurfees said.

Mocksville got insurance in the sixth. After Simmons and Aderhold were walked, Loyd doubled in the gap. Then there were back-to-back walks to Thiel and Daywalt, the latter forcing in a run to make it 7-4.

Sink gave up a one-out solo homer in the seventh, but he got two strikeouts to put the Moors away.

“I’ve beat them down and I’ve built them up,” Kurfees said. “Today we decided not to work out before the game. We’ve been working out at 4:30 before every home game, and we decided to take it off today. We reported at 5:30 and got ready to play baseball. Maybe that’s what they needed after we’ve been going out there in the heat. They have improved by working out like we have. We’ve worked them hard – very hard. We knew we had to do something. We couldn’t take beatings like we were taking early in the year.”

After going 1 for 7 during the three-game losing streak, Loyd went 3 for 4 with two doubles and five RBIs. It was Mocksville’s first five-RBI performance in 46 games, dating to Nick Ward’s five in a 16-15 win over Stokes County in July of 2019.

“It’s unreal how much his bat has improved,” Kurfees said. “He’s a big, strong boy. Dan doesn’t say a lot. But if things are going good, you’ll get a smile out of him. That’s about it; you’re not going to get much.”

“If Hancock gets a shorter swing, I believe he could be a really good player,” Kurfees said. “Ryan’s a backbone of the team. He’s a competitor. When you get Ryan Thiel pumped up, the team gets pumped up. When he gets into the game, you know it.”

Whitaker went 5 innings, did not allow an earned run and picked up his staff-high third win in 6 starts. Sink got the save after fanning 3 and walking none in two innings.

“Cole has pitched against the best in the division, and that dude has been hardened up,” Kurfees said. “He is a pretty good pitcher. Sink came in and did his job.”