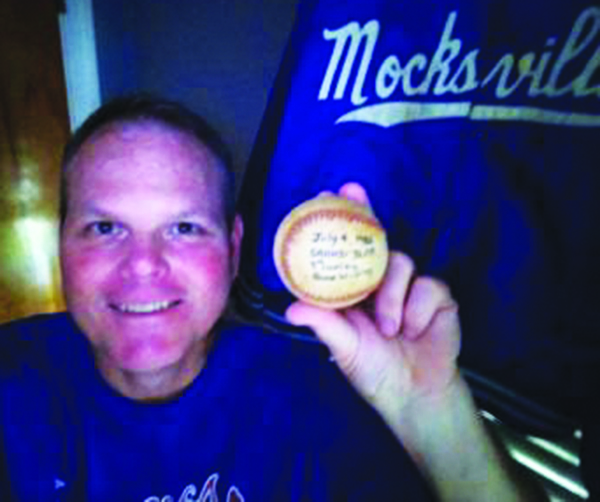 Part VI in a series on the 40-year anniversary of the 1982 Mocksville Legion baseball team.

Every kid who plays baseball envisions himself stepping into the batter’s box in the bottom of the last inning in front of a big crowd and hitting a walk-off home run.

A few hours before Hardister’s heroic swing, with Mocksville trailing Statesville one-game-to-none in the best-of-seven semifinal series, star Mike Wilcox stood up in front of the team and inspired passion with an emotional speech.

“I remember Willie’s story,” said Ron Morgan, who coached the Mocksville Legion team from 1982-84. “As I remember, it was under the trees close to the concession booth. I used that same speech to many of my youth football players over 39 years.”

On Friday, July 2, Mocksville fell short, 5-4, in Game 1. In Game 2 at Statesville on Saturday, it was behind Statesville 16-14 in the top of the eighth when the game was suspended until July 5 due to a power failure. So heading into Game 3 on the Fourth of July, Mocksville felt like it was down two games and obviously needed to win this one. The pitching matchup was Statesville’s Andy Watts against righthander John “JJ” Johnson.

In the second inning, laser-focussed Mocksville seized a 1-0 lead. Johnson put up four straight zeroes, but Statesville turned the game in the fifth, when catcher William Jurney pounded a two-run homer during a three-run rally that put the visitors in front 3-1.

Johnson weathered that storm and sizzled the rest of the way. But the score did not change in the sixth, seventh and eighth innings.

Meanwhile, fans were coming out to Rich Park in droves for the annual Fourth of July fireworks display. You know how people will tell you they were at a big event but they really weren’t? This time they’re all telling the truth. By the ninth inning, the Enterprise wrote that approximately 6,000 people were packed in the park.

“It was standing-room only,” Mocksville pitcher Chris Renegar said.

“It was typical July the Fourth in Davie County and there was nothing else to do,” left fielder Todd Cassidy said. “That was back in the day where there weren’t fireworks every other weekend. The whole county started showing up right before dark, and here we were playing a game that was supposed to be over. The place was absolutely packed. It lasted long enough to where the people that didn’t come for the game got to watch several innings. It was cool.”

“It was electric,” Johnson said. “You felt this crazy excitement in the air.”

Where did everyone park for the most-watched game in Mocksville Legion history?

Down to its final three outs, Mocksville was in trouble. When the No. 9 batter opened the bottom of the ninth with a groundout, it really looked like Statesville was going to win and take a 2-0 lead in the series.

But what happened from there was like a Disney movie script. A flurry began when leadoff man Barry Whitlock singled. Then Randy Taylor walked. Then Wilcox legged out an infield hit to load the bases. J.C. Hendrix saw the moment as a 12-year-old.

“I was there,” Hendrix said. “I’ll never forget that. Back then you could sit on top of the dugout. It had a little fence there and you could climb up there. I know Whitlock was on third.”

With one out and Statesville clinging to that 3-1 lead and the overflow crowd holding their collective breath, up walked Hardister. Mocksville’s cleanup batter and the Statesville hurler battled for several pitches.

“I remember being in the situation. 3-2 count,” said Hardister, who has lived in Roanoke, Va. since 1989. “The boy had pitched a pretty good game. He mixed a fastball with a curveball. It was 3-2 and I said: ‘I’m not going to embarrass myself. I’m going to put it in play somewhere.’ I was just looking for a pitch to hit and he hung a curveball. Thinking back, it looked like a beach ball. When you hit a ball on the meat of the bat, you don’t really feel it. I remember swinging and making contact and I took off running to first.”

Interestingly enough, the guy who called for the curve might have been Statesville catcher William “Bill” Jurney, who had earlier turned the momentum with his homer. Jurney and Mocksville’s Dan Riddle would become teammates at UNC Charlotte. Where is Jurney now?

“He was a good friend of mine,” said David Jordan of Iredell County, who played for Statesville in 1983-84. “After UNC-Charlotte, he went into the Marine Corps. He is a three-star General right now in the Marines. He is way, way up there. He was a helluva catcher. If you define Marine, he was that damn tough when he was 16-, 17-, 18-years old.”

Finally, the long at-bat saw Hardister, who had gone deep once in 20 Legion games, turn on the curve and crush it to left field. It was a lead-flipping, walk-off homer that will make people weep and write poetry. Mocksville was a 5-3 winner. A three-game losing streak was suddenly in the rearview mirror. The series was tied 1-1.

“I remember the base runners just stopped to watch it and the crowd went crazy,” Hendrix said. “I think all of Mocksville was there. I think some fireworks went off when the ball went out of the park. That added to the applause and the elation.”

“I was on the hill,” said Charles Kurfees, who was 13 at the time. “That was the damndest thing I’ve ever seen in my life. There’s a picture of my daddy (Sonny) jumping out of his lawn chair. Dick Nail was sitting beside of him. He was saying the season was over. He told Dick: ‘You know, we’ve got something to be proud of. We’ve done pretty good this year and we’ve got nothing to be ashamed about.’ Hardister fouled off several pitches. It was like something you’d see in the movie The Natural. It was unreal. The place went crazy. Daddy said when that thing went out of the ballpark, the fireworks were going off. They went to Statesville the next night and the place was packed. That’s what started the big crowds. That had to be the biggest crowd that’s ever been in Rich Park.”

“It was one of those storybook moments,” D. Riddle said. “That crowd that night was probably the largest baseball crowd I had ever been a part of until (my UNC Charlotte team) went to places like Florida State or South Carolina to play, that sort of thing.”

“I was on deck,” John “Boomer” Bivins said. “I didn’t want him to make an out, but I was hoping he’d walk because I wanted to hit. I wanted to knock that winning run in. But he hit that ball up in the trees. He started the fireworks for the night.”

Did the homer wind up near the creek or did it bang off the light pole?

“As soon as we won the game, the fireworks started,” Cassidy said. “So it was a magical, pinnacle moment of your career. It was your little boy’s dream comes true.”

It still feels more like a movie script than a real thing that happened.

“I think I got about halfway to first and it disappeared behind the lights into the trees,” Hardister said. “I got around first and I think everybody was up cheering. I got that little chill around the back of my neck going around second base. After I’d left, my dad would go out to see some of the Legion games and people would say: ‘Hey, you remember that night your boy hit that home run?’ So there was some folklore there for him to relish in, a story to carry on.”

Hardister has the home run ball. Who retrieved it?

“I really can’t say for 100 percent as some other kid may have picked it up and handed it to Ron (Whitlock) or I,” Marion said. “But I can guarantee you I touched it before Steve did.”

“Charles Kurfees might have gone and found the ball or maybe the Whitlock twin brothers and Matt Marion went looking for it,” Hardister said. “I’m guessing what I have is the ball. At this point, it represents that Fourth of July night and how winning that game maybe turned around our morale and gave everybody a hope and confidence not to give up until the last out of a game to continue our Legion season.”

When Hardister touched home, it was time for fireworks.

“I bet it wasn’t 10 minutes later, they were shooting the fireworks off,” Whitlock said. “We shook hands and everything and they cut the lights out – and boom, there they went.”

As if losing on the final pitch wasn’t painful enough, the stunned Statesville team and its wounded fans couldn’t get out of the park.

“Statesville couldn’t leave because it was packed,” said Steve Langley, who was Mocksville’s athletic director for several years. He’s now 75 and lives in Midway. “They had to sit and wait and watch the fireworks before they could get home. There was no way for that bus to get out of there.”

On July 5, the adventurous Game 2 resumed and Statesville won 21-17 to take a two-games-to-one lead. The rest of the series, though, was controlled by Mocksville.

Later in the evening on July 5, Kenny Riddle bombed his second homer in Statesville’s park and Mocksville dominated 15-8 to even the series.

Game 5 at Rich Park on July 6 was a riveting pitcher’s duel. Jeff Burton threw a three-hit gem and Mocksville won 1-0.

Game 6 was at Statesville July 7. D. Riddle was the star of the show. He scattered nine hits in a complete game. He also erupted for five hits and three RBIs. It was a stunning offensive display for a guy who wasn’t known for his bat; he came in with two hits on the year. Mocksville clinched the series four games to two by absolutely destroying Statesville 18-2.

“I remember that night,” D. Riddle said. “I had a few nights like that, but it wasn’t the norm. Sometimes you get in the zone hitting or pitching.”

The offensive madness in Game 6 included three hits and four RBIs from Whitlock and two hits from Taylor, including an inside-the-park home run.

Winning the series was a big deal. The players saw how big on the way home.

“Danny (Marion) had the sheriff’s department bring us in on the bus,” Morgan said. “As soon as we hit the county line, we had an escort. That was fun.”

“They had a police escort to Miller’s,” Kurfees said. “It was big-time back then. When you won in the first round of the playoffs, you had done something, buddy.”

“We were coming down Interstate 40 on the old bus, and when we hit the Davie County line, the sheriff’s department rode in the center of the two lanes coming east bound and blocked traffic so nobody could pass the bus,” Langley said.

Pedal-to-the-metal Mocksville was 15-9 and heading to the Area III Southern Division finals. Awaiting it was powerhouse Rowan County.