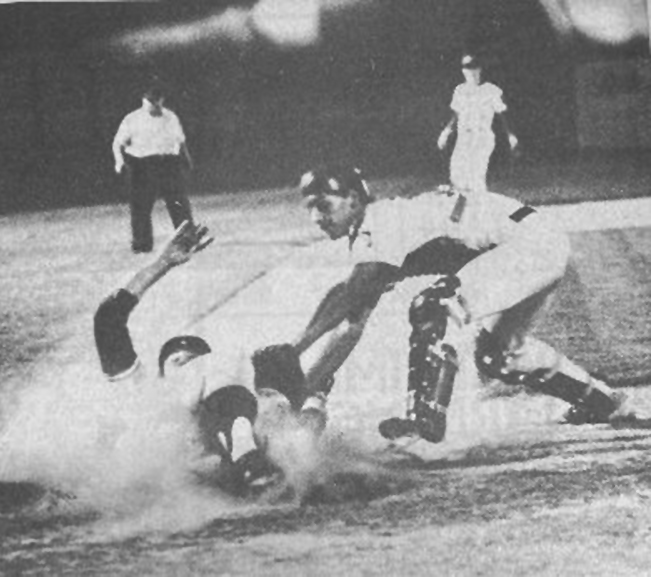 Fourth in a series on the 40-year anniversary of the 1982 Mocksville Legion baseball team.

A baseball team can only go so far if it’s suspect at catcher. The 1982 Mocksville Legion team had zero concerns at catcher. Kenny Riddle was so tough he seemingly shaved with a hatchet and flossed with barbed wire.

“Kenny was hurt a lot. I don’t mean hurt where he couldn’t play,” John “JJ” Johnson said. “But this guy was beat up and dirty all the time. He was a warrior, man. You couldn’t get him out of the lineup because he never wanted to come out. He hardly ever came out of the game.”

“According to dad, Kenny Riddle was the best catcher ever – second only to Johnny Bench,” Matt Marion said.

From the time Riddle picked up a baseball until he was 12, he was a pitcher/shortstop. He moved to catcher when he was 13, and it’s doubtful anyone has loved catching more.

“I played Babe Ruth in Farmington for Bill Tobin,” Riddle said. “Bill said: ‘Why don’t you be a catcher?’ I said: ‘Well, I’ll try it.’ I got ran over several times. We were playing at Asheboro and they had this guy who wasn’t as big as Barry (Whitlock), but he cleaned my clock at home plate. I’ve never been run over like that my whole life, but I wasn’t going to move out of the way.”

In the summer of ‘82, Riddle spent many days helping local farmers get up hay, then headed to the ballpark that evening and spent nine innings doing thankless work behind the plate. He also called all the pitches.

“In ‘83, they got another catcher from Forsyth County because I was the only catcher,” Riddle said. “I can remember them saying: ‘We’ve got to find another catcher in case Kenny gets hurt.’ I said: ‘I ain’t going to get hurt. You don’t have to worry about that.’”

“Kenny gave me confidence,” Jeff Burton said. “He had my back. (In a playoff win over Rowan County), their leadoff man came up. I had two strikes, Kenny called for another fastball and I shook him off. He singles up the middle. Two pitches later, Kenny throws him out at second.”

Riddle suffered a hitting slump in ‘82, but his mitt kept him in the lineup virtually every night, even when Mocksville played 12 games in 16 days. In ‘83, he rediscovered his offensive mojo and hit .302 with five homers.

“He would go through streaks where he would hit home run after home run after home run,” said Dan Riddle, who is a distant cousin. “When he was on, man, he would crush it. He was always solid behind the plate. He was always really honest. He would say: ‘Man, you’ve got nothing tonight. Your fastball is straight as a stick.’ Or he would say: ‘It’s moving like you wouldn’t believe. What are you doing different?’ He was always super honest and I always loved that about him. He knew I couldn’t see very well, so he and I had these special signals. We didn’t do 1, 2 or 3. We did like a fist in the middle, left was one pitch and right leg was another pitch.”

One night after Steve Hardister did the heavy lifting in a 4-3, 10-inning win at Thomasville, Mocksville picked up where it left off in a game at Concord. The offensive assault involved Mike Wilcox, who cracked a two-run homer in a four-run first inning; Burton, who added to a remarkable start with a two-run homer in the second, his fifth bomb in nine games; Randy Taylor, who broke out of a slump with three hits; and Whitlock and Hardister, who had two hits each as Mocksville won 8-4.

Burton threw a scare into everyone by having to leave the mound after two innings with a hurt arm, but Johnson picked up the slack  by hurling seven innings in relief.

After being idle for two days, Mocksville played again at Concord. It was becoming increasingly clear that the batting order was deep and resourceful. Scott Vogler, who batted eighth, went 3 for 3 with four RBIs to spark a 9-4 victory. Hardister (five innings, one run) and reliever D. Riddle took care of the pitching.

One night later on a Saturday, red-shot Mocksville entered hostile territory at Catawba College. Two earlier losses to Rowan County served as a powerful motivator, and Post 174 stunned frontrunner Rowan 10-4 to extend its winning streak to five. The visitors battered Davie Spainhour, who gave up seven runs in seven innings.

Four days after exiting early with the sore arm, Burton gritted his teeth and went the distance at Newman Park. The big sticks were Bivins, Whitlock and Wilcox.

“Burton was the fastest guy I ever caught,” K. Riddle said. “Yes sir, now he could bring it. I’m going to say he threw in the low 90s, and he had a bat, too. And he could suck them up on third base.”

At this point, Wilcox was making spectacular plays seem ordinary in center field. In the first win at Concord, he robbed a guy of a homer by jumping above the fence and snagging it. In the win at Rowan, Tim Kirk hit what appeared to be sure extra bases, only to see Wilcox take it away. On top of that, he was killing the ball. Steve Walker wrote in the Enterprise: “Wilcox continued to show without question he’s the class of the league in center field. He robbed opponents of seemingly certain hits and held base runners in check with his rifle arm.”

“Mike was a little flashy,” Johnson said. “He was extremely fast. For some reason, lefthanded hitters who hit with power, it just looks better coming from the left side of the plate and always has.”

One night after the rousing victory at Rowan, Mocksville was sunk by Andy Watts’ three-run homer in the first and eight errors, resulting in a 9-6 home loss to Statesville. Wilcox cranked a two-run homer in the seventh as Mocksville shaved a 7-2 deficit to 7-5, but that was as close as it would get. Wilcox, Taylor and Bivins had two hits apiece.

Mocksville got a shot at redemption the next night against Statesville at Rich Park, and Johnson sparkled on the hill as Mocksville rolled 10-2. Johnson went all nine, Statesville’s only runs coming in the fourth on solo homers by Bobby Sherrill and Marshall Allen.

Johnson, who had a hammer of a curveball, said D. Riddle was instrumental in his development.

“My sophomore year, I wasn’t overpowering anybody,” he said. “But I had good control and I had a big curveball. And my sophomore year, Dan Riddle started teaching me the forkball. Now everybody calls it the split finger. By the end of the season, I could get some guys out with it. By the time I got to my senior year and in college (at Spartanburg Methodist and Gardner-Webb), that was my pitch. It would eat people up. There’s a lot of guys who are jerks in high school. Dan was older than me and he could have been if he wanted to, but he was like a mentor. I mean, he helped me along with pitching and taught me a lot of stuff. I just grabbed the ball, rared back and threw it. Dan taught me how to bend your back leg and push. He taught me a lot about mechanics.”

In the win over Statesville, Mocksville barbecued starter Roger Harrington in the first, scoring seven runs on eight hits. Todd Cassidy, the No. 2 batter, had two of his three hits in the first, and Bivins laced a two-run double.

“You ate it up (playing in front of big crowds),” Bivins said. “You loved it. The reason you liked to play Rowan was because of the crowd. You got pumped up the way the (Rich Park) hill is in right field.”

Terry Johnson was the one who gave him the nickname Boomer.

“It’s not something I want to be really well known for,” Bivins said with a laugh. “I think I was a freshman in high school. We were playing at West Rowan and Terry was helping coach (Dave) Hunt. I swung at one so hard that I fell on my (butt) and Terry said: ‘Hey, John, that looked like Boomer Scott,’ who played for Boston at that time. I was playing first base and George ‘Boomer’ Scott played first base for the Red Sox. He called me ‘Boomer’ and that stuck. In ‘82, people I didn’t even know called me ‘Boomer.’”

Boomer was a natural first baseman for Davie, but he was moved to the grass for ‘82 Legion, and he had zero experience in right field. When he was told about the Enterprise reporting that he made an outstanding catch in the win at Rowan, Boomer busted into laughter.

“I made a bunch of diving catches. I made a lot of routine catches turn into diving catches,” he said. “That’s one of the hardest positions to play. On the infield, you’re used to the ball going straight up and straight down. I remember the first ball I had hit to me in right field. My (butt) starts running in to get it. Ol’ Wilcox said: ‘Baaack Boomer!’ So I turned around and went back and did about two somersaults and finally caught it. Wilcox had to be an All-American to be playing beside of me. Getting put out there in game-time action and never had any time to practice, I took some heat, boy. It was unmerciful sometimes, especially the Rowan County crowd. Down there in right field, a lot of them were sitting out there giving me hell.”

With about a week left in the regular season, the Mocksville’s Boys of Summer were firing on all cylinders and the whole town had their back, including PA man Bill Edwards.

“Boy, he was a legendary PA man,” Marion said. “He’s the only announcer I’ve ever seen get thrown out of a game. The umpire turned around and threw him out. He was running his mouth with the microphone still on.” 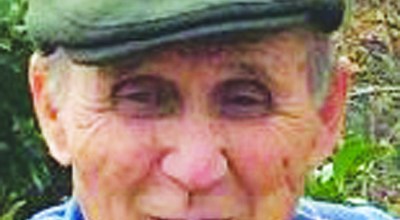 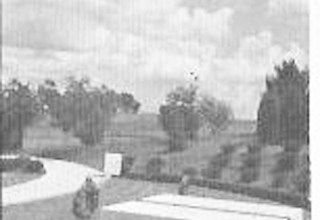 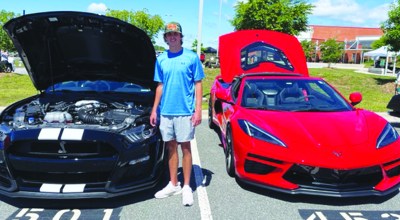