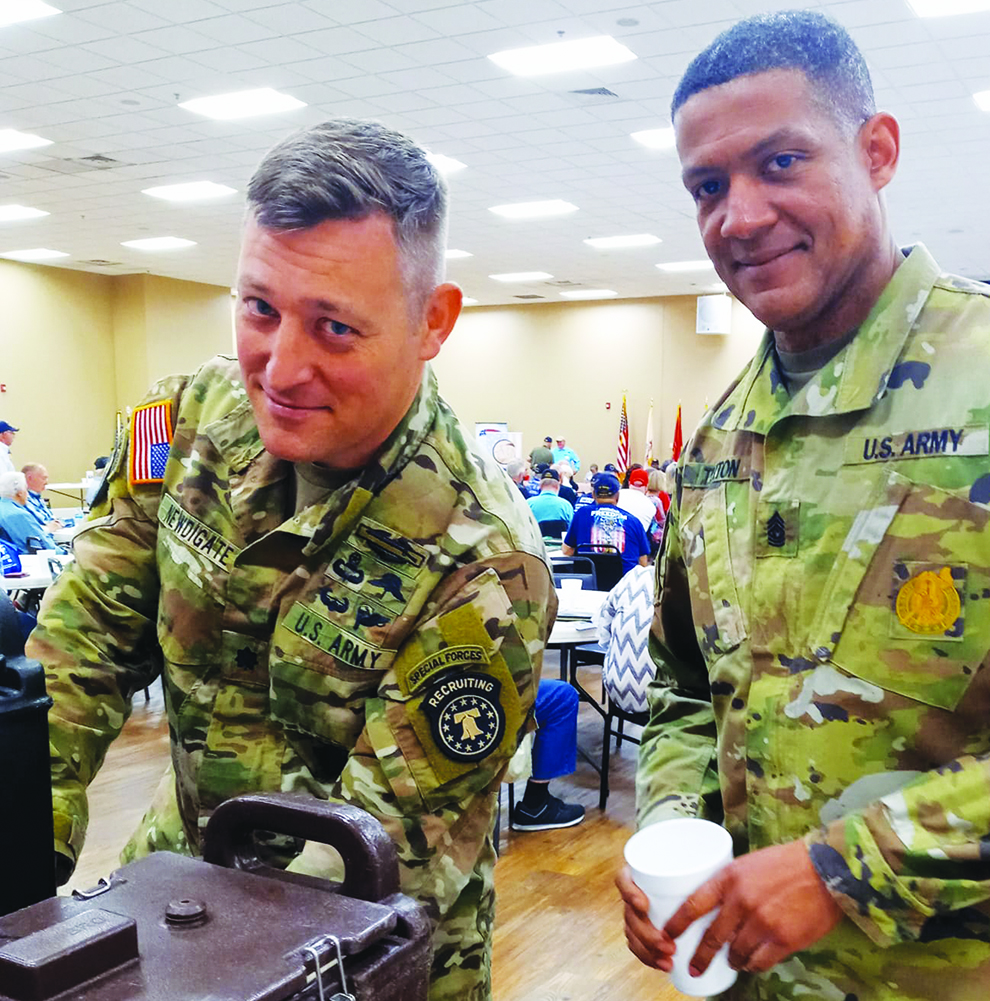 For many of us, coffee is our morning drink of choice upon waking. The hot beverage jumpstarts the day. When my coffee quota is not met, I’m off-kilter all day.

So it was for military troops – coffee added fuel for get up and go, warmed their bodies, and helped increase soldier morale. So much so that President Andrew Jackson added coffee to the official military food ration back in 1832. But there weren’t any French presses, so soldiers ground beans in the field.

The Army was first to introduce instant coffee. It was not much more than milk and sugar with a coffee reduction. The phrase “cup of Joe” originated during World War 1 when U.S. Navy Secretary Josephus Daniels banned alcohol on ships. There was no rum or wine, so men turned to coffee. For a while, coffee was rationed to ensure soldiers received enough.

Imagine coffee being rationed today – we’d be a bit bitter, wouldn’t we? Sometimes I close my eyes at night, looking forward to a fresh, steamy brew. And what tastes better with a hot cup of coffee than doughnuts or coffee cake? Coffee cake is a simple, sweet cake or rich bread that often includes spices, fruits, and nuts. Usually, with a streusel topping, the cake’s not frosted but, instead, lightly drizzled with a sugared glaze. An added plus is they’re easy to make. Although named such – coffee cakes have no coffee in them. But what the cakes do have – is a reminder to slow down and savor sweet moments.

In support of veterans, coffee events have returned to Richard Childress Racing Event Center in Welcome. This month, heroes from all military services and their families packed the room. Many organizations providing support programs and activities for veterans were present. They enjoyed the warm coffee and conversation for the comfort and community support that went with it.

Watching Vets connect and share their stories warmed my heart. We, too, can support our veterans. Consider holding a small support group at your home. Hosting is an up-close and personal way to connect with those we owe much. Serve a fresh pot of coffee with doughnuts or coffee cake – what better way to serve those who deserve our gratitude?

There’s something special about hosting a veteran in your home. The Bible has much to say about hospitality. Romans 12: 9-13 reads, “Love must be sincere. Hate what is evil; cling to what is good. Be devoted to one another in brotherly love. Honor one another above yourselves. Never be lacking in zeal, but keep your spiritual fervor, serving the Lord. Be joyful in hope, patient in affliction, faithful in prayer. Share with God’s people who are in need. Practice hospitality.” (NIV)

We owe gratitude to those folks who served our country, making ultimate sacrifices through military service. Let’s continue to show our heroes the support, respect, and appreciation they deserve – by serving them.

For more information on Veteran Coffee events, go to www.trellissupport.org and search Veteran Coffee. Keep an eye on the calendar for monthly veteran events at Davie County Senior Services.

In a large bowl, cut doughnuts into quarters. In a mixer bowl, beat eggs. Stir in condensed milk, salt, and cinnamon, and mix well. Fold in fruit cocktail, including juice and brown raisins. Pour over doughnuts and allow to sit for 10 minutes. Stir doughnuts and mixture until as much liquid has been soaked up as possible. In a greased baking dish, bake for 45-60 minutes in a 350-degree oven or until center is firm. Drizzle with Butter Rum Sauce. For the sauce, in a saucepan, melt butter. Slowly stir in confectioner’s sugar. Add enough rum according to your tastes. Heat just until it begins to boil. Cut bread pudding into squares and drizzle each with the rum sauce. You can substitute favorite fresh or candied fruits – be sure to include the same amount of fruit juice as in canned fruit.

In a mixer bowl, combine cream cheese, butter, and sugar. Beat until light and fluffy. Beat in eggs, one at a time, beating well after each addition. Beat in flour, baking powder, soda, and salt while alternating with milk and vanilla. Mix well. Spread half the batter in bottom of greased and floured 13 x 9 baking dish. Spread berries evenly over batter. Dot remaining batter over berries. In a bowl, combine brown sugar and nuts. Sprinkle evenly over cake. Bake 40 minutes in a 350-degree oven. Serve warm.

In a mixer bowl, cream butter and sugar. Beat in eggs, one at a time, beating well after each addition. Dissolve baking soda in milk and beat in while alternating with flour, cream of tartar, salt, and nutmeg. Fold in vanilla and lemon rind. Stir well. Roll out the dough ¼ -inch thick on a floured surface. Cut with doughnut cutter. Allow to stand 20 minutes. Fry in deep Crisco shortening heated to 375-degrees. Brown doughnuts and lift out of oil with fork. Use several paper towel thicknesses to drain. Glaze as desired.

For the base, in a mixer bowl, combine sugar, flour, baking powder, salt, and just enough milk for it to stick together. Press down into a greased 9 x 9 baking dish. Cover the base with a generous layer of fresh sliced rhubarb. Adding a few finely chopped prunes is optional. For the custard, in a bowl, beat egg. Whisk in the sugar, flour, and almond extract. Pour custard over the fruit. Bake in a 325-degree oven for 35-40 minutes or until set. For the drizzle, combine butter, milk, and sugar until desired taste and consistency.

In a mixer bowl, beat eggs and add sugar. Mix well. In a bowl, dissolve yeast in milk that’s been scalded and cooled to lukewarm. To egg mixture, beat in flour and salt while alternating with the yeast milk. Fold in raisins. Beat well. Allow to rise until double in bulk. Drop by tablespoons in Crisco shortening heated to 375-degrees. Drain on thick layer of paper towels. Shake in a bag with granulated sugar. You can add ½ lb. dried fruit mix, candied fruit peels, to recipe if desired.

In a saucepan, cover prunes with water. Cover and simmer for 20 minutes. Drain and reserve 2/3 cup of the liquid. Chop prunes and set aside. In a mixer bowl, beat eggs. Add sugar and mix well. Beat in flour, baking soda, salt, and mace while alternating with Wesson oil and reserved prune juice. Beat well. Pour into well-greased and floured 12 x 7 baking dish. Fold in chopped prunes. In a bowl, combine softened butter, sugar, and flour and sprinkle on top of cake. Top with chopped nuts. Bake in a preheated 350-degree oven for 35 minutes.

In a mixer bowl, beat eggs. Add sugar and beat together with Crisco shortening. Beat in flour, salt, baking powder, nutmeg, and cinnamon while alternating with milk. Mix well. Roll out ½-inch thick on lightly floured surface. Cut with doughnut cutter. Fry in Crisco shortening heated to 375-degrees until browned, and lift out with a fork. Drain on thick layer of paper towels and dust with confectioners sugar.

In a bowl, combine melted butter, brown sugar, cinnamon, and nutmeg. Spread over bottom of 9-inch baking dish. Arrange peach slices in rows on top. For the batter, in a mixer bowl, cream shortening, and sugar. Add egg and mix thoroughly. Add flour, baking powder, and salt while alternating with milk. Mix well. Spoon half of batter over peaches and smooth. In a bowl, combine sour cream and preserves. Pour over batter. Drop spoonfuls of remaining batter over preserves and smooth. Bake in a preheated 350-degree oven for 50 minutes. Cool 10 minutes. Invert cake on a plate. Serve warm.

In a mixer bowl, cream shortening, and sugar. Add eggs one at a time, thoroughly mixing between each addition. Add potatoes and mix well. Add flour, baking powder, nutmeg, and cinnamon while alternating with milk to make dough. Roll out dough ½-inch thick and cut with doughnut cutter. Fry in hot oil for 2 minutes on each side. Drain on thick layer of paper towels.

In a mixer bowl, cream butter and sugar. Add eggs, one at a time, beating well after each addition. Beat in flour, baking powder, and baking soda while alternating with sour cream and extract. Mix well. For the topping, in a bowl, combine brown sugar, cinnamon, and nuts. Set aside. In a well-greased and floured 9 x 13 baking dish, spread half of batter into the bottom. Sprinkle blueberries on top of base layer. Sprinkle 1/3 of crumb topping over blueberries. Spread the other half of batter into the pan. Sprinkle remaining topping over the batter. Bake in a preheated 325-degree oven for 1 hour or until tests done.

In a mixer bowl, blend brown sugar with butter. Add eggs one at a time, beating well after each addition. Add milk while alternating with flour, baking powder, salt, and spice. This should make a soft dough. Pat and roll out on a lightly floured board. Cut with doughnut cutter. Fry a few at a time in Crisco shortening heated to 365-degrees until browned on both sides. Drain well on thick paper towels.

In a saucepan, heat sugar, water, and flour. Cook until mixture forms a soft ball when dropped into cold water. With a spoon, pour syrup on top of each doughnut. Turn doughnut upside down on a plate of shredded coconut.

For the cake, in a mixer bowl, cream butter and sugar. Add eggs, one at a time, beating well between each addition. Add flours, baking powder, and salt while alternating with milk and vanilla. Pour into a floured and well-greased 9 x 13 baking dish. For the filling, in a mixer bowl, combine cream cheese and softened butter with sugar. Beat in flour, cinnamon, and cardamom. Mix well. Spread over the top of the cake mixture. For the topping, in a bowl, combine sugar, cinnamon, and nuts. Sprinkle on top of the filling. Bake in a 375-degree oven for 45-50 minutes or until tests done.

In a mixer bowl, beat egg. In another bowl, sift flour, baking powder, salt, nutmeg, and sugar. Cut in shortening until mixture is fine crumbs. Beat flour mixture into the eggs while alternating with milk. Mix well. Fold apples into batter. Mix well. Fill greased and floured regular-sized muffin tins two-thirds full. Bake in a 350-degree oven for 20-30 minutes or until golden brown. In a bowl, mix cinnamon and sugar. Remove doughnuts from pans. Roll in melted butter and then cinnamon/sugar mixture. Serve warm.

For the cake, in a mixer bowl, cream butter and sugar. Add eggs, one at a time, beating well after each addition. Add flour, baking powder, and salt while alternating with milk. Spread into greased and floured 9 x 13 baking dish. Cover coffee cake with fruit. For streusel, in a bowl, combine soft butter, sugar, flour, and cinnamon. Sprinkle streusel on fruit. Bake in a 350-degree oven for 35-40 minutes.