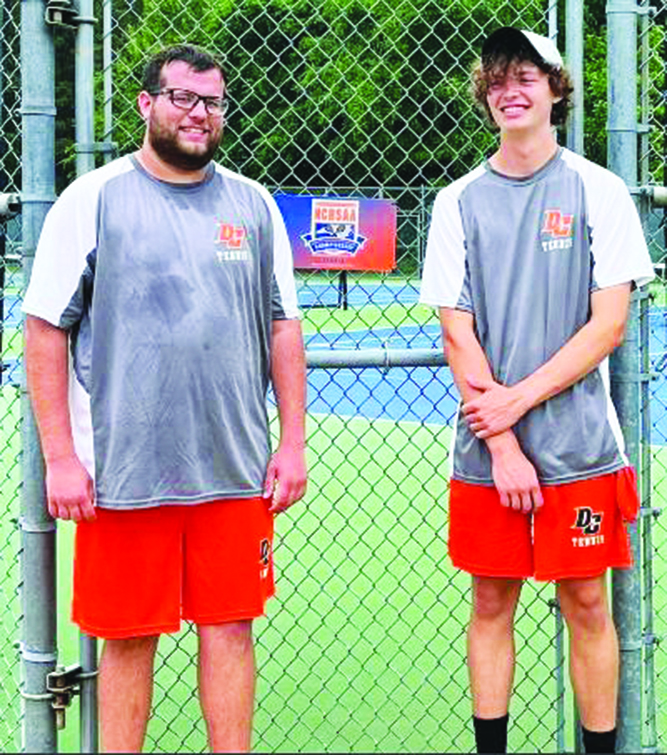 The fairy tale tennis season for doubles partners/cousins C Crenshaw and Burke Rosenbaum ended in the state quarterfinals at Millbrook Exchange Park in Raleigh on May 6.

Their ride was something to behold. They won the conference doubles title. They took third in the regional. How amazing was it to watch a Davie boys doubles team qualify for the state tournament? If another Davie duo has done it, it came between 1978, the first year that Davie was a member of the NCHSAA, and 1996.

“What a magnificent ride,” coach Shane Nixon said. “For these two guys who have literally grown up on Davie County tennis courts to end as one of the eight best teams in the state in 4-A is just amazing.”

In the round of 16, Crenshaw/Rosenbaum took down senior Matthew Peterson and junior Andrew Binns of T.C. Roberson. The scores were 6-3, 6-3. It was beautiful.

“We got off to a shaky start, but once we righted the ship, we really got it right,” Nixon said. “(Peterson/Binns) are really good players, but my guys just had way too much firepower.”

The eighth-year coach raved about his two stars.

“Burke was Burke,” he said of the junior. “I’ve said it a thousand times, but his hands are so good and he wastes no effort. I also think I probably don’t say enough about how good an athlete he is. And when his competitive juices get to flowing, he jacks it up a notch. He is fun to coach, but even just to watch him play is really fun.

“C played with so much emotion and heart. He has been the heart and soul of our team all year, and really for four years. But on this run, he’s kept everyone, including me, charged up. He made a couple of really great shots, because that’s what C does.”

Crenshaw/Rosenbaum fell in the quarterfinals, but they were not overmatched. In fact, they won the first set 6-3. Seniors Walt Reese and J.P. Damare of Cardinal Gibbons roared to life in the second set and won 6-1. The battle went to a third set and it was tight. Crenshaw/Rosenbaum could not get over the hump in a 6-4 decision.

The 2-1 loss did not dampen the excitement around these two War Eagles.

“These two guys (from Cardinal Gibbons) are really good,” Nixon said. “One of them is the No. 1 seed for a team that is in the final four of the state dual team. They both hit the ball with so much power.

“My guys played hard, all the way to the end. I thought after we won the first set that we were in pretty good shape, but they just seemed to get better as the points dragged on. Burke and C made it a fight to the bitter end, and that made me so proud.”

Crenshaw/Rosenbaum checked out with a sparkling 18-2 record. The curtain closed on Crenshaw’s career, and it was a terrific one. He went 38-9 in singles and 41-9 in doubles.

“C’s gregarious nature and fun-loving ways have left a mark on Davie tennis that will remain,” Nixon said.

Rosenbaum is one of the finest players to ever suit up for Davie, and there is another chapter to go in his career. He will head into 2023 at 33-3 in singles and 35-3 in doubles.

“Burke leads a group of guys that got some unexpected experience this year, so the future might be brighter than we imagined,” Nixon said. “I think good things are coming again, maybe soon, for our program.”