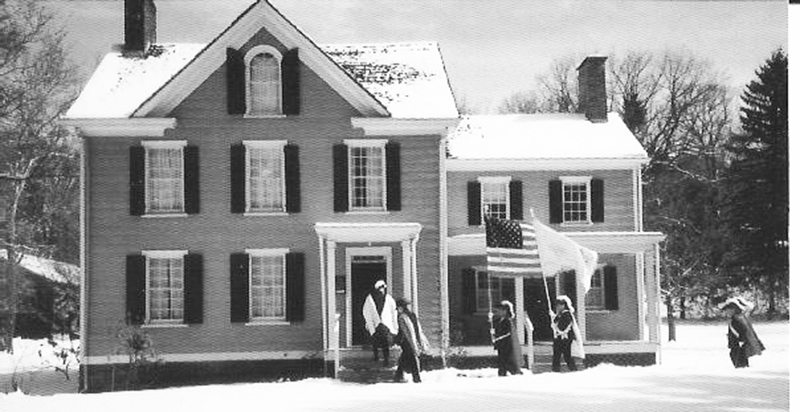 Grover Cleveland is different from all other Presidents of the United States in a number of ways.

The one site open to the public connected to President Grover Cleveland is his birthplace in Caldwell, N.J., called Horse Neck when Cleveland was born on March 18, 1837. That interesting house was a Presbyterian manse. Grover’s father served the Presbyterian denomination in a number of positions, but at the time his son, Grover, was born, he was the preacher in Horse Neck.

That manse was purchased by the state of New Jersey in 1934, and it is administered today by the New Jersey Department of Environmental Protection and Energy, Division of Parks and Forestry. You have to make a reservation in order to tour the house.   Call 973-226-0001.

The book, “Cabins, Cottages, and Mansions” by the Benbows, describes Cleveland’s birthplace in the following manner:

“The first floor rooms are not furnished as they were in Grover Cleveland’s time but rather, they are filled with objects and furnishings related to Mr. Cleveland, many of which were donated by members of his family.  On a chair in the front parlor rests a cape, made by Frances Folsom Cleveland, who sewed as a hobby. Visitors see a pastel portrait of Mr. Cleveland‘s, and a doll wearing a copy of a dress once worn by Mrs. Cleveland, who scandalized Washington by wearing black to social functions.

Some of the others items on exhibit in the house:  the top hat that President Cleveland wore in his second inaugural parade in and the flags used in that parade in 1893. There is a collection of Mr. Cleveland’s pipes. Another interesting and usual item in the house is a piece of the Clevelands’ wedding cake which has somehow been preserved. Also the Clevelands’ marriage certificate is there. The list of items found in that room goes on and on—there is a collecting of Cleveland’s fishing gear and book on fishing, a collection of his walking sticks and canes, the former president’s retirement desk, and the sheet music of the song about “Baby Ruth.”

After leaving Caldwell, N.J., the Cleveland family moved to New York State.  Grover attended school there. When he was about 14, Grover’s father died. Grover went to work to help support his family.  His brother worked at a school for the blind, and Grover joined him there for about a year before he went to work on an uncle’s farm. After working on the farm for a while, Grover’s uncle arranged to have his nephew clerk in a Buffalo, N.Y. law office. He learned enough while clerking in that law office to be able to pass the New York Bar. From that time on he moved up in the legal and political worlds.

Cleveland was active in the Democratic Party.  After serving in several positions, he ran for sheriff. He won. He was known for his honesty and a willingness to work hard. When two murderers were to be hanged, Cleveland sprung the trap himself because he said he was not going to ask another person to do something that he would not do.

After serving as sheriff, he practiced law for several years before he decided to run for Governor of New York. As Governor, he was known as a reformer and as a hard worker. He read every bill that was put on his desk before he would sign it or veto it even if he had to stay up all night to complete the task.

After he had served as governor for two years, Grover Cleveland was nominated as the Democratic candidate for President of the United States   He ran against Republican James G. Blaine. It was a dirty campaign, but when the votes were counted, Grover Cleveland became the 22nd President. He was inaugurated as president in 1885, and on June 2, 1886, the 49-year-old president married 21-year-old Frances Folsom in the White House.

The difference in age never seemed to be a problem for Cleveland and his young wife. Frances loved being first lady and became popular with the American public. She was sometimes compared to the much loved Dolley Madison.

While Cleveland was president, his family spent the summer at “Red Top” a 27-acre property north of Georgetown. The house there was torn down some years ago. Cleveland did some things as president which antagonized even members of own party, but he was again nominated as his party’s candidate. He lost that election to Benjamin Harrison. Frances Folsom Cleveland was distraught, and, when she said good-by to the White House staff, she asked them to take care of the White House because they would be back.

Even though Grover Cleveland was 28 years older than his wife, theirs seemed to be a happy marriage. They had five children. Their daughter, Ruth, became a favorite of the American people while her father was president. Unfortunately, “Baby Ruth” died when she was 12.  She was memorialized in a number of ways. A candy company even made a candy bar which they named Baby Ruth. Many people think that the Baby Ruth candy bar was named for the famous baseball player, Babe Ruth.  Not so.  It was named for the Clevelands” precious daughter, Ruth.  When you visit the Cleveland birthplace in Caldwell, you are given a Baby Ruth candy bar in memory of Baby Ruth Cleveland.