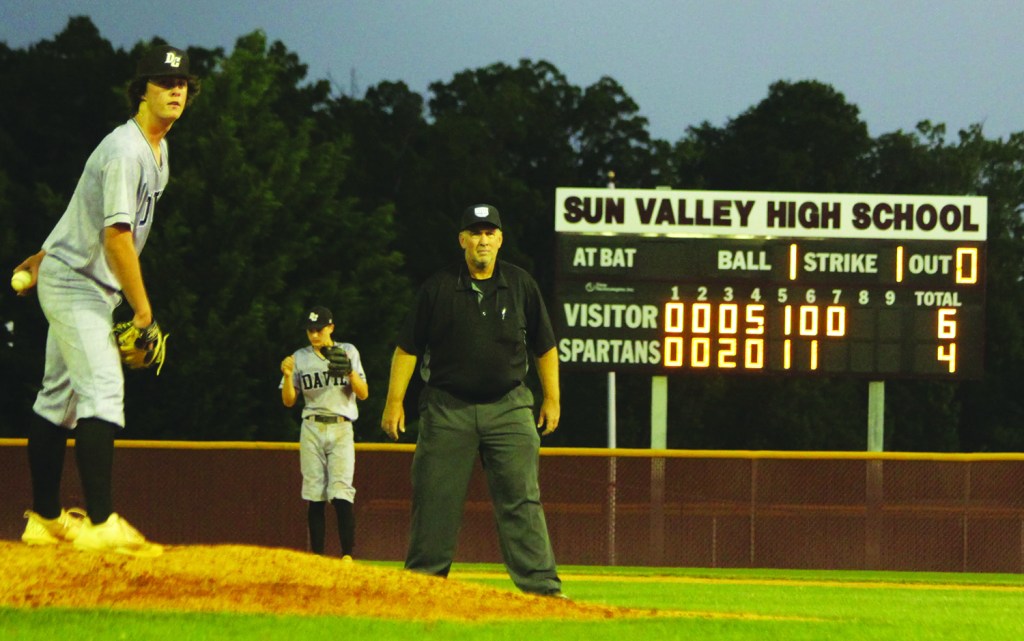 Sophomore Braeden Rodgers came on in relief in the seventh and picked up the save. - Photo by Leigh Bliss

Davie’s baseball team used small-ball magic and did something unexpected in the first round of the 4-A playoffs. The War Eagles went on the road and upset Sun Valley 6-4 on May 10.

The Spartans won 19 games, tied for first in their conference and boasted a No. 4 seed in the 32-team West Region. Davie came in barely above .500 and carried the 29 seed to Monroe.

But the War Eagles developed resiliency while losing seven games by one or two runs, including an 11-10 loss to East Forsyth in the Central Piedmont Conference Tournament. And a comeback win was a charmed moment for the underdog. Davie erased a 2-0 deficit and knocked out Sun Valley.

Davie, though, couldn’t pull off another upset, losing to West Forsyth in the second round.

“We kept our composure,” coach Joey Anderson said after the Sun Valley game. “You could tell we’ve played in tight games throughout the year, which helped us.”

Sun Valley touched Bayden Hazlip for two runs in the bottom of the third. Two singles and a double had Davie in some trouble, but Davie’s senior ace did not get flustered. In fact, his season form chart ultimately held against a strong opponent. He went six innings, struck out six and ran his record to 8-3, joining a short list of eight-game winners in the Davie archives.

“He wasn’t fazed by (the deficit),” Anderson said. “I visited the mound and said: ‘Look, we have to score runs to win. So those two runs don’t matter. I need for you to keep competing and I need you to give us a chance to win.’ That’s all I told him. He was like: ‘Yes sir.’”

After sending just nine batters to the plate in the first three innings, Davie’s offensive surge came in the fourth.

“That kid did a real good job,” Anderson said of Sun Valley’s pitcher. “He kept us offbalance. He was throwing hard, but we made adjustments.”

A big five-run fourth was sparked by leadoff man Coy James, who singled before Ty Miller walked. With two on and no outs, Anderson dialed up his small ball. The first guy he ordered to bunt was No. 3 batter Davin Whitaker, who placed the ball toward third. The pitcher fielded it but threw it in the dirt at third. The third baseman could not scoop it and all hands were safe.

That set the stage for Parker Aderhold, who delivered a two-run single. With runners at the corners, Ty Goodson bunted it to the third baseman, who threw wildly to first, allowing two runs to score as Goodson ended up on third. The next bunter was Parker Simmons, who dropped it down in front of the plate and wound up with a hit as Davie stormed to a 5-2 lead.

“We had to manufacture runs,” Anderson said. “(With Whitaker batting), I was looking to move (James and Miller) over and give Aderhold a chance to tie the game. They thought they were going to get Coy at third, and it was going to be a bang-bang play. Ty laid a perfect bunt down. When Parker Simmons was up, I was like: ‘Well, shoot, let’s squeeze again.’ With four bunts, we scored five runs.”

Davie added one in the fifth. Miller got an infield hit and stole second. With two outs, Aderhold had another clutch moment, singling to give him three RBIs on the night.

The Spartans fought back. In the fifth, they scored on a passed ball. In the sixth, they put together three consecutive singles to cut Davie’s lead to 6-4. In the seventh, Hazlip walked the first batter; it was just his eighth free pass in 57.2 innings. The senior lefty’s night was over. Anderson shoved sophomore lefty Braeden Rodgers into a big spot, and Rodgers solidified his importance by slamming the door.

Rodgers’ first batter bounced to second baseman Simmons, who flipped to James at second for the first out. (“It took a bad hop,” Anderson said. “Simmons put his body in front of it and made sure we got the out at second.”) The next batter flew out to Cooper Bliss in right. When Rodgers walked a batter on a fullcount offering, Sun Valley had runners at first and second. The count would go to 3-2 again, but Rodgers got him looking to nail down a gutsy win.

“Braeden came into his own in the (24-10) win over West Forsyth (when he worked 5.1 innings in relief),” Anderson said. “We were down 6-0. From that day forward, he has grown up. He works hard in practice. He’s one of the hardest workers in the bullpen. He’s always trying to figure out how he can get better. It’s going to be interesting to see in the next two years where he ends up.”

“The guys needed that,” Anderson said. “We had a will to win that game. We’ve lost some close games. We have given people wins. They’ve learned through those mistakes and you saw a lot of happy faces. I mean, there were a lot of boys on cloud nine.”

In the second round in Clemmons on May 12, Davie was flattened by No. 13 West Forsyth.

Although the CPC rivals split the regular-season meetings, the Titans (24-5) were clear favorites to take the rubber match, and the result was their sixth straight win.

Davie was subdued by Harrison Lewis, a junior pitcher who is a Division-I prospect. He hurled a one-hitter with one walk and seven Ks, only needing 67 pitches to go five innings.

James was never going to live up to his freshman hype, except that he did. Now he seems capable of anything.

“Coy doesn’t play like a freshman,” Anderson said. “He carries himself very well. He’s not cocky. He’s humble. He will ask questions. He tries to find ways to get better every day. He’s made his mistakes and he owns them. But he keeps working hard.”

Notes: Davie lost 11-3 to West on April 6. Two days later, Davie beat West 24-10. … Anderson’s boys finished 13-12, a successful season for a young team. Big things are expected in the near future, especially if Davie develops pitching depth. … James entered the second round at .404 and fell one hit short of the program’s .400 club. … Reagan lost in the second round, 2-1 to Cuthbertson.