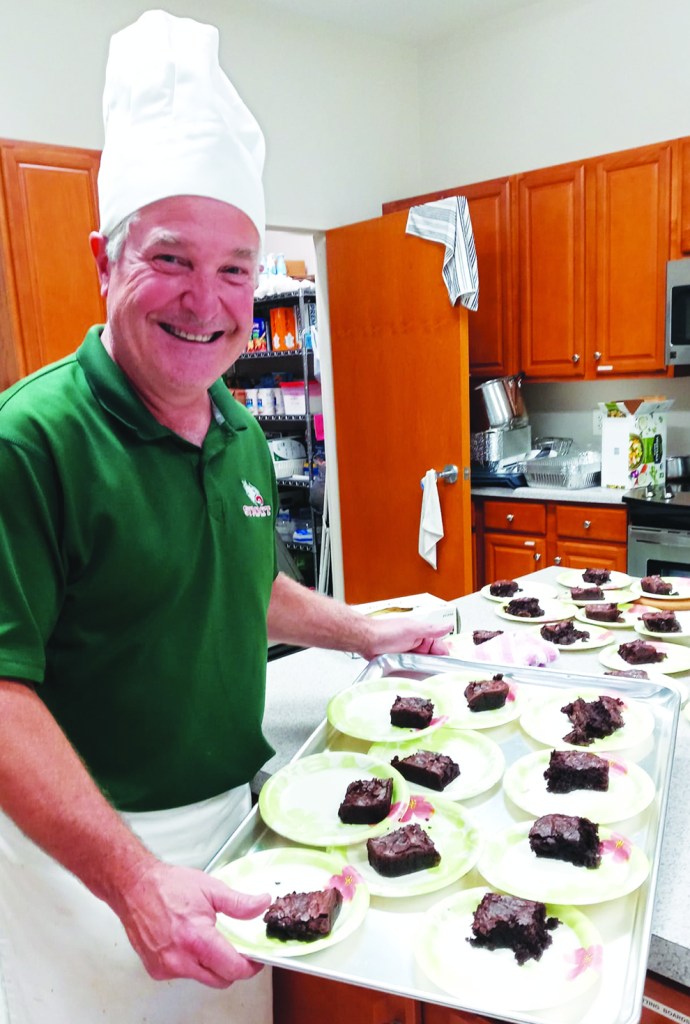 When invited to attend a Ham Club meeting and dinner, I expected to hear some amateur comedian hamming it up.

We must have had a faulty transmission somewhere – and got our lines crossed. At the very least, I thought some classic ham dish would be served – that wasn’t relayed correctly, either.

But that night, I did have some interchanges with a few folks regarding hams – ham operators. And I was wired when seeing Forsyth Amateur Radio Club was serving beef and noodles. The beloved, old-fashioned spaghetti supper had been revived.

Spaghetti suppers go way back, but not as far as the history of amateur radio – that would be 1934. When I was growing up in the 60s, the spaghetti supper was the deal – and it seemed every school PTA had one. A popular fundraiser, the suppers successfully fed a large crowd. Now rivaled by chicken and oyster stews, BBQs, and chili cook-offs, the spaghetti dinner appears to have all but had its day. But to my delight, now and again, the old-fashioned supper still connects with some folks.

Before meeting Chef Don Edwards – I never knew there was so much intelligence to be reported regarding spaghetti and breadsticks. Boy, was I wrong. While a member of the amateur radio club, Don’s also a chef – no amateur at cooking. Professionally, he was a scientist and biomedical engineer, retiring from Reynolds Tobacco. Don was only 10 when he became a ham operator – he’s now 69. As the club’s media chair, and editor, he’s responsible for a 50-page monthly newsletter.

For Don, cooking is a passion, not a profession. The chef became proficient at cooking for large groups while a Scoutmaster for the Boy Scouts and at camp Raven Knob. Learning to bake while hiking the Appalachian Trail in his late teens, Don noted, “Did you know – all it really takes is self-rising flour, water, and a hot flat rock on some coals? Everything else is just polish – that and the butter and coarse salt crystals.”

Three varieties of spaghetti were served – beef with mushrooms, beef without mushrooms, and a vegetarian recipe. The mushrooms were cooked in Kerrygold butter, a pure salted butter from Ireland – you can find it in any grocery. Don chopped Vidalia onions and added minced fresh garlic, cooking them in the butter until translucent before adding the beef.

“Onions, garlic, and tomatoes become my ‘moipoix’,” commented the chef.

Fresh Roma tomatoes and 7 pounds of 88-90% beef were used to prepare spaghetti for 100 people. He did cut one corner, saying, “I cheated. I used a little Italian seasoning.” I think we can all forgive him for that small indiscretion.

One oversight when preparing his spaghetti was pepper. And surprisingly so, as he’s all about pepper, saying, “When I taste something, I can feel it over my entire body. I can tell exactly where pepper comes from.” He considers the best pepper to be from the Malabar Coast of India but agrees some Vietnamese peppers are as good as any. Don buys coarse ground but prefers to grind his own.

I didn’t notice a thing missing – the spaghetti was delicious. Many accolades to the chef were conveyed before the meeting was over. The origin of Don’s spaghetti recipe wasn’t disclosed – but he thinks it came from a friend.

A multi-veggie salad bar and homemade, fresh buttermilk dressing were served with the pasta. Toasted, yeasty garlic breadsticks were made from scratch. The bread was brushed with a thin spread of Kerrygold butter and sprinkled with dried parsley flakes, freshly pressed garlic, and a shake of Kosher salt – his secret addition.

Ghirardelli chocolate brownies followed – rich and chocolaty – served with a scoop of vanilla or fudge ripple ice cream and drizzled with Hershey’s chocolate syrup. As many southern grandmas have reported: “We was full as ticks.”

Amateur radio is a formal communications service administered by the Federal Communications Commission. It provides emergency backup communications and encourages people to connect with folks over airwaves – person to person. When natural disasters occur, such as hurricanes or earthquakes, and commercial systems are knocked out, the hobby of “hams” is especially useful. Backup communication is often provided for hours, days, weeks, or months until services are restored. Learning the world of radio communications gives you access to the most capable set of communication privileges. Journey through amateur radio by checking out the club website or attend a meeting. Meetings are held at 7:30 pm on the second Monday of every month at the Red Cross on Coliseum Drive in Winston Salem. For more information, go to their website at www.w4nc.com.

Did you know we were born with a built-in communication system? When personal situations arise, we can transmit our feelings – straight to God. The Bible has much to say about communication. God talks to us through the Holy Spirit in us and through His word. God helps us understand His word and apply it to our lives. We can talk back to God through prayer or time spent reading the Bible. When we give our time to these disciplines, we begin to discern God’s voice over the noise of this world. The Holy Spirit begins speaking to us, and we begin to hear God through those around us, circumstances, and even our conscience. Good communication with God and people has a lot to do with listening.

“Christians have forgotten that the ministry of listening has been committed to them by Him who is Himself the great listener and whose work they should share. We should listen with the ears of God that we may speak the Word of God.” — Dietrich Bonhoeffer

Mushrooms are optional in your sauce. If included, in a skillet, melt Kellygold butter and saute mushrooms until brown. Set aside. In a large pot, brown onions in olive oil until translucent, then add garlic. Add fresh tomatoes and cook. The French call this Moipoix (pronounced meer-PWAH) – the aromatic ingredients cooked down in butter or oil without browning them. Cook fresh tomatoes down for 15-30 minutes, and then add the canned tomatoes (optional). He prefers the Contadina brand. The canned tomatoes help “extend” your sauce, but you can skip this step if preferred. Mix in browned beef and tomato paste. Add diced green pepper and mix well. Don prefers adding the peppers with the hamburger as he likes a little more crispness to the peppers. Add olive oil and mix in spices. For extra flavor, or if you need to thin your sauce, add some vegetable broth. If the sauce is too thin, you can add some all-purpose flour to thicken it back up. Go slow with the flour as it takes a few minutes to thicken. If you think sauce is too sweet, a little vinegar will kill the sweetness. Simmer sauce for 2-3 hours before serving. For the spaghetti, it’s cheap, so go all in and don’t scrimp! Plan on 2 or more ounces per person. For “al dente,” cook for 10 minutes in a rolling boil, and don’t overcook. Rinse and drain. Buy genuine Italian or American parmesan cheese and grate your own. Spaghetti is so much better with real cheese on top. A hand-crank cheese grater is worth the $30 investment and does more than just cheese. Top with black olives and fresh parsley if you want to be fancy! Leftover sauce is excellent for freezing in appropriate-sized containers.

This larger recipe makes around 5 gallons. Don splits this sauce recipe into gallon pots. His three options are 2 gallons of Mushrooms with beef, 2 gallons of no mushrooms with beef, or 1 gallon of vegetarian, including mushrooms with no beef. The recipe will feed 100 people. 2-4 Tbsp. Kellygold butter, 3-4 24-oz. Cosco-sized trays of mushrooms, 4 Vidalia onions, 36 cloves garlic, 40-50 Roma tomatoes, 30 oz. Contadina diced tomatoes, 7 lbs. hamburger, 4 Tbsp. tomato paste, 6 green peppers, If you divide up the recipe, you need to split ingredients accordingly. When adding olive oil, each gallon of sauce gets ½ cup of oil per gallon. You can do that math. For spices, 2 Tbsp. to the large pots and 1 for the vegetarian sauce. For salt, 2 Tbsp. to each big pot and 1 Tbsp. for veggie pot. Cumin is 1 tsp. per pot. You can add cayenne pepper and red pepper flakes if you prefer. While some like it hot – Don prefers it not. For extra flavor or to thin sauce, vegetable broth is 1 ½ cup for large pots and ¾ cup for the veggie sauce.

Heat water in microwave to 105-115 degrees. Heat is important – 110 is ideal. The colder the yeast – it takes longer to rise. Too hot, and you kill the yeast. Add water to yeast, mix and set aside. In a microwave, heat the milk, sugar, Crisco, and salt to 105-115 degrees. Transfer to a mixer bowl. Add to yeast and water and mix. Then add egg and 1 ½ cup bread flour, a little or a time, or sift. Sifting will make it easier to mix with electric mixer with bread hook or a spoon. Batter will be thin. After mixing, add another 1 ½ cup of flour and mix with wooden spoon. Knead the dough by hand for 5 minutes. You will need additional flour to add until this becomes consistency of Play Dough. The dough should not be sticky at this point. Put the dough into a bowl that’s been oiled, turning it to cover lightly with oil. Cover with plastic and chill. It will keep for several days and continue to rise. Cover 2 baking trays with parchment paper –  one per loaf. Shape dough into 2 loaves, 3-4 inches wide, and 1 inch tall. Cover with towel and allow to rise in warm place for at least 50 minutes. Then take sharp knife and cut loaves into little strips about 1-inch wide, 3-5 inches long, and spread them out on trays with 1-inch separation. Cover again with towel and allow to rise 30 minutes. With a knife, cut a notch down the center of each stick for the butter. Bake in a preheated 400-degree oven for 15-20 minutes until brown and toasty. When done, brush tops with garlic butter and sprinkle dried parsley or rosemary on top. Sprinkle with coarse ground kosher salt crystals. The melted butter will hold the salt crystals in place. The salt adds much flavor, the coarseness of the salt adds texture, and since most of this is added last, it gives more flavor with less sodium. Baking is as much science as it is art. Cups are a poor way to measure flour. For the scientist in you – weigh the flour on a scale. 120 grams equals one cup.

In a mixer bowl, beat eggs. Add sugar and mix well. Beat in flour and mix well. In a saucepan, melt butter and chocolate over low heat. Beat in vanilla extract and the butter-chocolate mix to the egg mixture. Mix well. Pour into a greased and floured 8 x 8 square cake pan. Bake in a preheated 325-degree oven for 25-30 minutes or until firm.