Boys come through with 2 wins 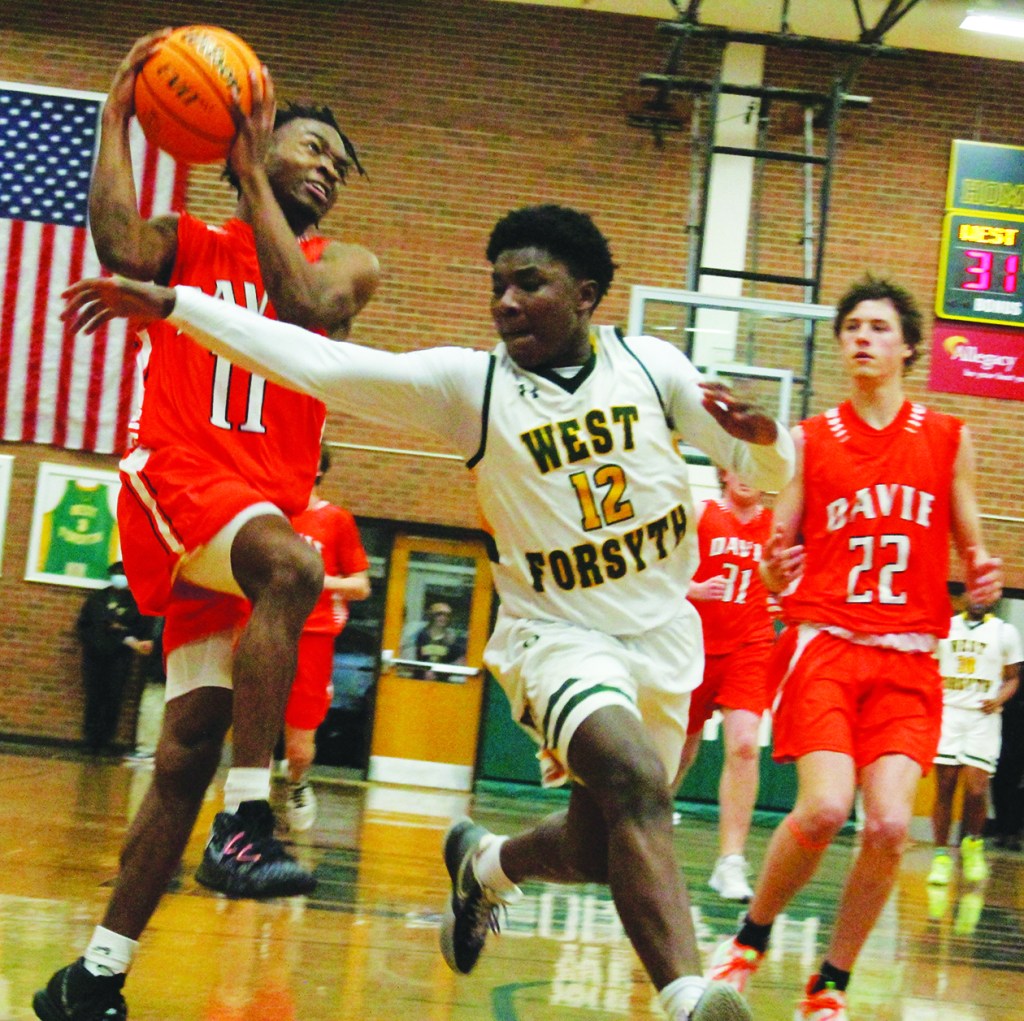 Za’haree Maddox goes in for two of his 14. - Photo by Mark Floyd

After losing a series of close games, Davie’s varsity boys basketball team survived a rollercoaster of nerves against visiting Mt. Tabor and picked up its signature win of the season, 58-54, on Feb. 1.
Davie overcame a Oak Hill Academy transfer’s fourth-quarter dominance and avoided the first four-game slide since 2016-17.
“We deserved that for how hard we’ve worked,” coach Bruce Wallace said. “We’ve lost some close games and this felt good to get over that mental barrier. And we beat a really good team.”
Davie scored the last six points of the first half, including a Tate Carney 3-pointer that was a breath of fresh air after Davie missed six straight from distance.
At the start of the third quarter, Davie extended its run to 13-3. After Zymere Hudson hit a 3, Za’haree Maddox got a steal and made a behind-the-back pass to Blake Walser for a layup. Hudson got a steal and Alex Summers finished on the other end. Maddox hit a teardrop as well as two free throws. When Walser nailed a 17-footer, Davie had a 39-24 lead.
Davie had a 51-40 lead when Walser scored off a pocket pass from Maddox. The lead was 53-42 when Hudson hit a pair from the line.
But then sophomore phenom Tybo Bailey, who transferred from Oak Hill a few days before the game, went on a shooting spree and turned this into a classic Central Piedmont Conference game.
Tabor would score 12 of the next 14 points. Davie had possession with a 55-52 lead, but it was whistled for setting an illegal screen. Tabor scored at the other end, making it 55-54.
“That was the most terrified I’ve ever been on the bench,” Wallace said.
But the War Eagles kept their composure and secured the much-needed win. Facing Tabor’s fullcourt press, Jake Powers hit Hudson for a layup. Tabor missed two 3s and Maddox got the rebound and was fouled with 4.9 seconds left.
The senior leader hit the front end of the one-and-one to nail down a thrilling win that produced seven lead changes and four ties.
After only managing one field goal at East Forsyth, Maddox came through with 17 points on 7-13 shooting, five assists and three steals.
“He played lights out,” Wallace said.
Walser, the senior center, was awesome with a varsity career high of 17 points and eight rebounds while converting 8 of 12 shots.
“Blake has been huge for us,” Wallace said. “I’m so happy with him. He’s playing loose and having fun.”
Hudson scored 12 points on eight shot attempts and handed out four assists.
“Zymere doesn’t do anything amazing, and he doesn’t do anything below average,” Wallace said. “He’s just a good player. I mean, he could play pickup ball until he’s 50-, 60-years old.”
Summers had five points and four rebounds. Coleman Lawhon and Carney had four and three points, respectively. Jake Powers collected 11 rebounds, two assists and two steals.
The 6-3 Bailey almost beat Davie single-handedly down the stretch, scoring 12 of his team-high 18 points in the fourth. This was his Tabor debut.
“He’s got three Division-I offers,” Wallace said. “I said: ‘If No. 0 is in the game, Zymere, you have to guard him because he just transferred from Oak Hill. He almost won them the game at the end.”
Notes: Tabor (13-7, 7-4 CPC) clanked 22 3-pointers in 29 tries and shot 30 percent. By contrast, Davie hit 51 percent (23-45). … While Davie-Tabor did not meet from 2017-18 through 2020-21, Davie ended an 11-game losing streak in the series, including 52-45 on Jan. 4. … Davie beat Tabor for the first time since the 2013 CPC Tournament final when Peyton Sell hit a tiebreaking triple with four seconds left to give Davie an unforgettable 67-64 win. That team featured Caleb Martin (18.1 ppg), Cody Martin (14.8), Austin Hatfield (13.9), Taylor Hatfield (9.3) and Kenyon Tatum (8).
Reagan 71, Davie 62
The game at Reagan on Feb. 2 was one to forget. The War Eagles played from behind all night and absorbed a crushing blow to their state playoff hopes.
The Raiders (12-8 overall) completed a season-series sweep despite coming in with four losses in five games.
Davie’s points: Maddox 16, Walser 13, Hudson 9, Lawhon 9, Jackson Powers 6, Jake Powers 5, Carney 4.
Davie 49, WF 41
This wasn’t the greatest game Davie’s ever played. It did just enough to get out of Clemmons with the win on Feb. 4.
Davie improved to 11-9 overall despite shooting 16 percent in the first half and 39 percent for the game. That was good enough because West was even worse (21 percent overall).
After trailing 22-16 at halftime, Davie outscored West (7-14) 33-19 in the second half.
“We played better in the second half,” Wallace said. “We generated more turnovers. We’re good when we’re able to get turnovers. Our defense was definitely a lot better than it was (at Reagan).”
Davie’s 14-2 run wiped out West’s 24-16 advantage. Summers’ pass led to a Walser basket. Hudson drove and scored. Walser converted a post move. Jake Powers attacked the lane and scored. Walser got a steal and threw ahead to Maddox as Davie shot 5 for 5 in the first four minutes of the third – one more field goal than it hit in the entire first half.
The Titans, who have lost four straight, clawed back within 38-36 in the fourth. Davie finally put them away with an 11-5 spurt. Jake Powers made a 3. Maddox scored four points in about five seconds on two steals. Hudson, working inside, threw out to Maddox, who gave it right back to Hudson for two. And Jake Powers assisted Walser as Davie went up 49-41.
Walser continued to impress with a new varsity high of 18 points. He made 7 of 10 field goals, 4 of 4 free throws and snatched seven rebounds.
“Since Jan. 8, he’s had a whole month of good games,” Wallace said. “He’s got his little hook shot down.”
Maddox had 14 points, six steals, four rebounds and three assists. Jake Powers (five), Hudson (four), Lawhon (three), Hayden Williams (three) and Summers (two) rounded out Davie’s scoring.
Notes: West, which lost to Davie by 39 the first time, stayed close by hitting 17 of 23 free throws. … Davie has won four straight and 10 of 11 against West. … Davie is sixth in the CPC. The standings: Glenn/East Forsyth 9-2, Tabor 8-4, Reynolds 5-4, Reagan 6-6, Davie 5-7, West Forsyth 3-9, Parkland 0-11.