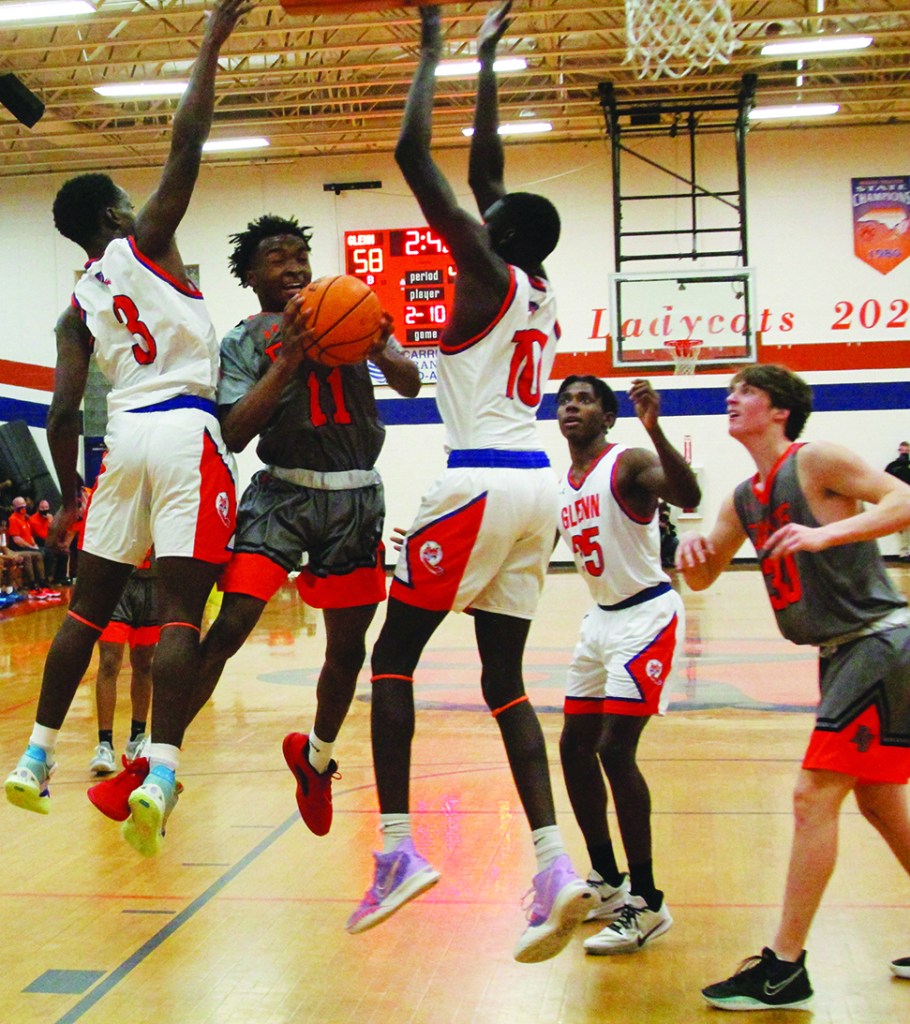 Davie’s varsity boys basketball team, which is bidding for a fifth straight winning season and a top-four finish in the Central Piedmont Conference, is a fine team. Glenn is a superb team.
The War Eagles hung tough until the last four minutes, when first-place Glenn kicked into high gear and pulled away, 70-53.
“I thought that was the best team we’ve played,” coach Bruce Wallace said. “We played hard, so I can’t be upset about anything.”
In the first game of the week, the War Eagles enjoyed their second wipeout in a row, beating Parkland 86-56 at home on Jan. 12.
In the decisive first half, the Mustangs (2-12, 0-6 CPC) had no answer for center Blake Walser and point guard Za’haree Maddox.
Walser scored Davie’s first four points. At halftime, when Davie nearly had Parkland doubled up at 47-24, Walser had 13 points on 5-of-6 shooting and six rebounds. At halftime, Maddox already had 15 points and five assists.
Maddox finished with 23 points on 8-of-11 shooting, seven assists, six rebounds and two blocked shots in the fifth 20-point performance of his senior season. Walser went for 15 points, eight rebounds and two assists as the senior tied his varsity scoring high. He converted 6 of 8 field goals and all three foul shots.
“(Going inside to Walser) was part of our game plan,” Wallace said. “When we know we have the post advantage, Blake can do good. He’s turned himself into a sure-handed, reliable post scorer. If he can give us 15 a game, we’re pretty tough. He’s been locked in since his concussion because he realized any game could be your last game.”
Zymere Hudson scored an efficient 14 on 5-of-7 shooting as Davie rolled up its most points in 132 games. Everybody saw action as Hunter Davis and Jackson Powers scored six each. Landon King had five points and three assists. Coleman Lawhon had five points. Caleb Earnhardt, Hayden Williams and JT Bumgarner had three. Jake Powers had two points and five rebounds. Tate Carney had one point.
Notes: Davie won by 30 after belting West Forsyth by 39. … This was the most Davie points since an 86-63 win over North Davidson in February of 2016 when Heath Slabach erupted for 39 and Nic Starnes and Cooper Wall had 10 each. Slabach’s effort included 10 3s. … Davie shot 55 percent (32-58) to Parkland’s 28 percent (17-59). … This was the first Davie-Parkland matchup since February of 2017.
Glenn 70, Davie 53
The loss at Glenn on Jan. 14 was not exactly embarrassing. The Bobcats (12-3, 6-0) have ripped off 10 straight victories. They dominated the glass, got one second-chance opportunity after another and shot nearly 50 percent from beyond the arc.
“They’re what I call snatchers because they go up and snatch the rebound,” Wallace said. “When a team has a bunch of snatchers, it’s going to be hard. We boxed out and sometimes they still got the rebound.”
Give the War Eagles credit for holding their own for most of the game. They took a 15-12 lead after Maddox, Hudson and Jake Powers made consecutive 3s. They trailed 18-17 after Maddox did a shake-and-bake move that resulted in a teardrop bucket.
Glenn, though, took momentum to halftime, 29-22, and it used a 16-2 run to open a 45-31 gap. That’s when Davie showed some heart. Hudson hit a 3 and then a reverse layup. Davie hit four 3s – Jake Powers, Maddox, Maddox again and Hudson – to pull within 54-49 with 4:04 to go. That 18-9 run saw Davie hit 6 of 7 shots, including five 3s.
Alas, the Bobcats mashed the gas in the final four minutes. They hit 7 of 8 shots during a 14-0 run that produced a 68-49 bulge. Davie went 0 for 4 during that fatal stretch.
“We kind of ran out of gas,” Wallace said. “They got hot and it was game over.”
And then: “I didn’t realize how deep they were. I didn’t know those guys on the bench were that good. They’re pretty dang good. We were physically outmatched for sure.”
Maddox (19 points, six assists, four rebounds) and Hudson (17 points, seven rebounds, three assists, two steals) gave it a valiant effort. Maddox went 3 of 6 from downtown and Hudson went 7 of 10, including 3 of 5 on 3s. Jake Powers had eight points and five boards. Walser had seven points and seven boards. Lawhon had two points.
Notes: Glenn hit 8 of 15 3s and shot 45 percent overall. Davie was held to 39 percent (18-46). … Davie’s upset chances were hurt by 7 of 15 foul shooting. … Glenn seems destined to win the league, having banked two-point wins over Mt. Tabor and Reynolds and a four-point overtime win over East Forsyth. … The top three in the CPC are Glenn (6-0), East (5-1) and Tabor (4-2). Davie (9-6 overall) is tied with Reagan for fourth at 3-4. … Davie’s top three scoring averages are Maddox at 18.3, Hudson at 14.2 and Walser at 7.1.