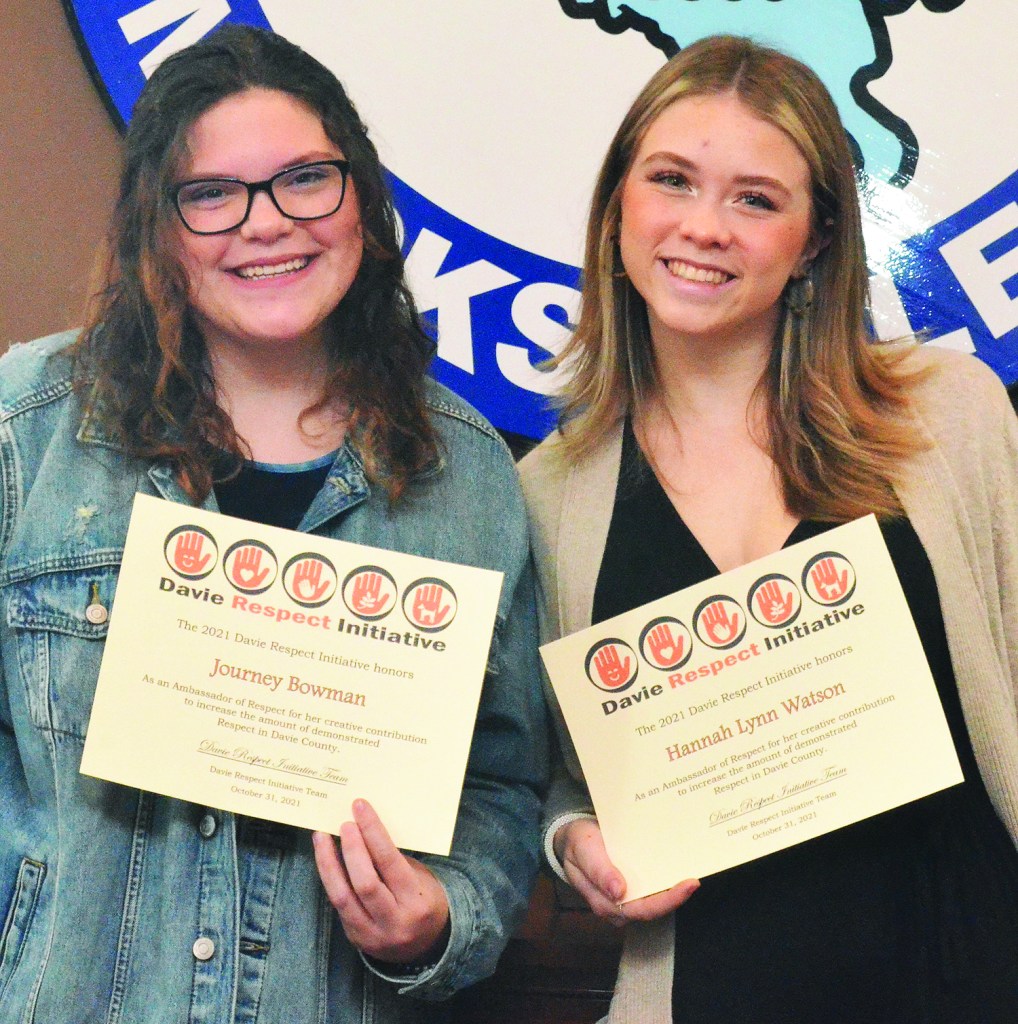 One girl has a special feeling for the elderly, who may be feeling alone or unworthy.
Another understands that sometimes the best teachers for teens are other teens.
And yet another sends positive vibes via special characters.
All three – Amilea Redmon, Hannah Watson and Journey Bowman – received $1,000 from the Davie Respect Initiative to continue their good deeds as “Ambassadors of Respect.”
Amilea Redmon has high-functioning autism and social anxiety, yet she has found her voice through her delightful, creative artwork.
“Amilea’s art assists her to relate to the world; she would draw pictures and give them to people who were sick, or just hand someone a picture that she had just drawn in order to cheer them up and make them smile,” said her mother, Stephanie Grant Redmon.

The “Koopaling” characters are sure to cheer anyone up and during the pandemic, mother and daughter sent pictures to nursing homes as well as donating some of Amilea’s framed art to the homes. Observing the positive response from folks receiving the pictures, Stephanie and Amilea began Art4Cause in hopes of inspiring and motivating others on the spectrum.
“If you have met one person with autism, you have met one person with autism,” Stephanie said. “Another thing we shouldn’t do is assume everyone on the autism spectrum is the same because they are not – everyone has strengths and weaknesses. Amilea’s strength is her art and her special thoughtfulness for people in her own way; her weakness would be social awkwardness, but that doesn’t mean every autistic person you meet will be that way.
“Amiliea’s social anxiety makes it hard for her to talk to others and to make friends because some don’t understand her and don’t want to find out. Having a supportive network is so important and Amilea has been a blessing to me and my husband and our extended family.
“The biggest misconception I think is assuming. We have to remember we are all humans and God created us all; we are all different but at the end of the day, we all have a heart and before we judge those on the spectrum, let’s try to be understanding and get to know someone or have a conversation with a mom or dad that may be going through the process,” Stephanie said.
Amilea has been drawing since she was old enough to hold a pen or pencil. Her parents noticed that she had her own distinct style and would put her spin on any picture she was shown. Her “Koopalings” are fun, joyful characters that Amilea creates as well as creating hand-drawn digital artwork. Respect and love are communicated through Amilea’s art.
“I try to make others feel good by drawing and giving them pictures I create,” wrote Amilea on her Respect Initiative application. “I hope what I do will inspire everyone, especially people on the spectrum like me, to try and don’t give up on what they love to do. I love it when people smile at my artwork.”
Amelia’s artwork is sure to put a smile on anyone’s face.
For more information about Amilea’s artwork, contact Stephanie Grant Redmon on Facebook or at sredmon01@gmail.com.
“Congratulations to Amilea for having the courage to complete the application and go through the DRI process despite your social apprehensions,”said Julia, Burarzer of the Respect Initiative. “We are so delighted to be able to share your positive message and story as well as expose people to your amazing artwork.”
•
Hannah Watson noticed that some of her fellow Davie High School students were getting behind in curriculum, so she started a peer tutoring program.
That idea struck County Manager David Bone as great, and he noticed that Hannah wasn’t only a problem solver, she listened to others. “Teachers will say that some of their best assistants are other students,” he said. “It’s just a great idea. It’s a very deserving project and a very deserving young leader we have today.”
Hannah says the program not only helps students with their studies, it brings students together creating positive relationships.
She hopes to further her studies at N.C. State or UNC, possibly studying bio-medical engineering with goals of becoming a teacher.
•
Journey Bowman was recognized for her “Senior Spotlight” feature that appears in the Davie County Enterprise Record. She interviews senior citizens, many in nursing homes or assisted living with few visitors, takes a photo and submits it all to the newspaper for publication.
“A lot of them have been forgotten, and that’s really sad,” she said. Many will tell her their story isn’t worth printing, but she knows that everyone has a story that is worthwhile.
Mocksville Mayor Will Marlin said he has seen first-hand Journey’s mother, Dina, take her children to nursing homes to visit.
“These seniors, they’re still a part of what’s going on here,” Marklin said, “and I know their peers read the paper from one end to the other.”
He supports the Respect Initiative, and wishes more young people would participate. “This is a great thing, and it does foster respect in our community.’
Hannah and Journey were presented the awards at a ceremony at Mocksville Town Hall.
Stephen Leighton said a group wanted to give back to their community some four or five years ago and came up with the idea for a respect initiative. They present about 10 $1,000 awards a year.
“We have seen some of the most amazing ideas, and we know they are really making a difference,” he said. “We know these ambassadors will continue to spread respect for the rest of their lives.”
To nominate a young person, aged 12-21, who is doing good, being kind or showing respect or if you are a person or group in that age range residing in Davie County, please apply at www.davierespect.com.