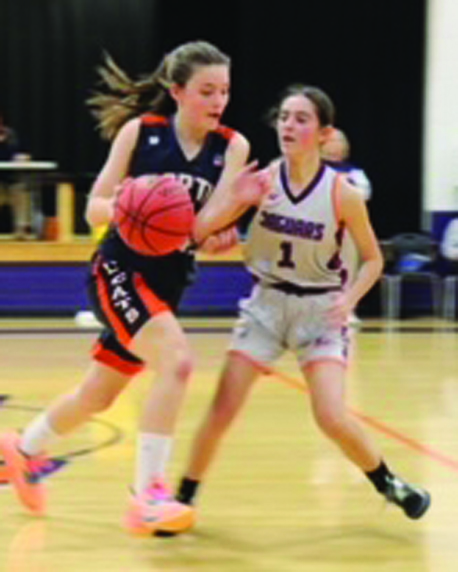 After going 0-8 last season, after losing by 20, 23 and 27 points to North Davie last January/February, the Ellis girls basketball team’s confidence soared in the season opener on Nov. 22.
The performance by Bailey Aderhold and the Jaguars was really something. Aderhold scored the most points by an Ellis female in 91 games, and the Jaguars recorded the most points in their 177-game, 15-year history.
“Every player executed exactly what we asked and practiced,” first-year coach Susan Jones said after Ellis thumped the Wildcats 50-20. “They shared the ball, made smart passes and cheered for one another no matter who was on the floor.”
The star was unquestionably Aderhold. By scoring 23 points, this could very well have been the first step in creating a banner season. She had already distinguished herself by leading the Jags in scoring the past two seasons (6.8 as a sixth grader, 8.6 as a seventh grader). Her brilliant performance against visiting North marked the most points by a Jaguar since Emma Slabach’s record 29 in a 35-26 win over Oak Grove in 2013-14.
“Bailey was our anchor in the center defensively and made excellent defensive reads, continuously allowing her to make a number of steals,” Jones said. “On offense she never stopped shooting, and the baskets came as a result.”
Aderhold and Madison Daugherty powered a 14-2 onslaught in the first quarter. Ellis pushed the halftime margin to 23-8 as it emphatically ended a nine-game losing streak.
Emmie Burris finished with 11 points, Daugherty eight, Olivia Smith sixth and Stella Frye two.
Jones took note of tremendous efforts up and down the lineup.
“Stella needs to be commended for her awesome defense,” she said. “She single-handedly shut down a very strong player. She wore her out with constant pressure and fast feet, allowing for numerous steals.
“Emmie did the same by frustrating their inside player and denying her the ball.
“Madison and Olivia came off the bench and the intensity and constant attacks offensively never wavered.
“Kate Nicholson and Kayden Richardson gave us the rebounding presence we needed, which helped us get our fast break started.
“Brittany Hernandez had hustle plays. She was on the floor diving for loose balls constantly.”
The scoring for the rebuilding Wildcats: Avarie Martin nine, Maliyah Allen five, Maddie Ratledge four and Madison Lewis two.
“We are very young and inexperienced,” North coach Trish King said. “I only have two players that have ever played on a basketball team before this year (Ratledge and Martin). This will definitely be a building year. Mostly we are just teaching the fundamentals of the game. I’ve got a great group of girls to work with, and I’m looking forward to watching them grow whether it’s through wins or losses.”
Summit 34, SD 30
South Davie surged to a 9-6 lead in the first quarter, but visiting Summit controlled the rest of the game as the Tigers stumbled in their Nov. 22 opener.
Baskets by Ari Warren, America Stockton, Raney Phelps and Emmy Johnson lifted South to the first-quarter lead. The Tigers fell behind but were in contention until the end. Their deficits were 17-13 at halftime and 25-22 at the end of the third.
Johnson delivered 14 points. Phelps had eight, Stockton four, Warren three and Joyah Abrams one.
Notes: Ellis had lost nine of 11 to North. … The previous Ellis record for single-game points was 48.