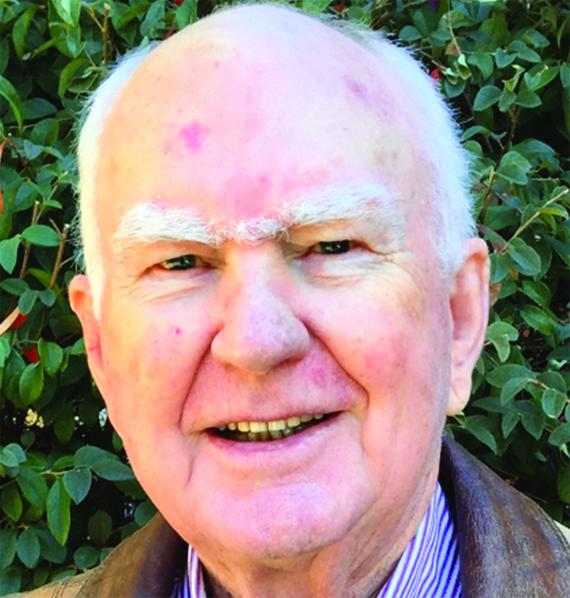 Colonel Harold Henderson “Hal” Clark, USMC Retired, 85, of Newport, passed away Sunday, Nov. 7, 2021, at Wake Forest Baptist Medical Center in Winston-Salem.
His funeral service will be held at 2 p.m., Saturday, Nov. 27 at First United Methodist Church in Morehead City, officiated by the Rev. Powell Osteen. The family will receive friends an hour prior. Interment will follow at Cedar Grove Cemetery in Newport.
He will be remembered as a man of faith, honor, and integrity. He was a loving husband, proud father, and doting grandfather. Hal was born to sharecroppers on a farm outside of Bristol, Tenn. on Nov. 9, 1935. Despite humble beginnings, his childhood memories were those of family love, mischief, and laughter. After graduating high school, he worked in automotive factories in Detroit and played for a short while with the Chicago White Sox to pay for college. His baseball career was cut short when he was selected to be drafted into the Army but chose to join the Marine Corps instead.
He entered the Marine Corps in 1957 to become a Naval Aviator. He served in the Dominican Republic, the Cuban Missile Crisis, Vietnam, Laos, and Cambodia, flying with the Marines and with Air America. Hal flew countless combat missions in both fixed and rotary wing aircraft, including the A-4 Skyhawk, AH-1 Cobra, UH-34D Seahorse, UH-1 Huey, and CH-46 Sea Knight. After returning from Southeast Asia, he finished his college degree and returned to the fleet to transition to the AV-8A Harrier and later served as Commanding Officer of VMAT-203, the Harrier training squadron, at Cherry Point MCAS. After the graduating from the USMC Command and Staff College, the Naval War College, and serving another tour overseas, he spent his remaining military career dedicated to planning and integrating the next generation Harriers and close air support capabilities at Headquarters Marine Corps, Washington, D.C. and as the Wing G-3, Head of Operations, at the 2nd Marine Air Wing, Cherry Point MCAS.
He received his Bachelor of Arts from Auburn University in 1972. For his service to our country, he was awarded the Legion of Merit, the Purple Heart, two Distinguished Flying Crosses, two Bronze Stars with Valor, 48 Air Medals, Navy Commendation Medal with Valor, Army Commendation Medal with Valor. Hal retired from military service in 1984 and became a trusted financial planner who enjoyed helping young Marines and their families. He loved golf, woodworking, and cheering on his beloved Auburn Tigers. He was a member of First United Methodist Church in Morehead City, NC where he sang in the choir and enjoyed the fellowship of his Men’s Bible Study every Tuesday morning at 5. Hal devoted an abundance of time to serving his community in leadership roles with his church, the Newport Rotary Club, and the Newport Pig Cookin’ Contest. Most of all, he loved spending time with his grandchildren at Gumpond, the family farm. He taught them the virtues of generosity and silliness and how to drive his old “Bubba” truck, shoot a shotgun, and slow cook ribs.
He is survived by: his wife of 59 years, Peggy Cannon Clark of Newport, NC; his sons, Gregory Cannon Clark (Carey) of Greer, SC and Jeffrey David Clark (Melissa) of Mocksville, NC; his grandchildren, Emily Grace “Gracie” Clark, Madeline Nicole “Mattie” Clark, Eleanor Maxwell Clark, Jackson William Clark, Harris William Clark and Thomas Cannon Clark; and his brother, Allen Knox Clark of Banner Elk, NC.
He is predeceased by: his parents, Earl Grady Clark and Ella Francis Clark of Bristol, VA; his sister, Jean Clark Marion of Bristol, TN; and his brothers, Grady Clark of Marion, SC and Ralph Lee Clark of Drakes Branch, VA.
In lieu of flowers, please consider a donation to the Semper Fi Fund at www.semperfifund.org.
The members of the family would like to extend their heartfelt appreciation to the staff and management of Brookstone of Clemmons for their love and care for Hal in his final years.
Family and friends are welcome to submit online condolences at www.mundenfuneralhome.net.
Arrangements by Munden Funeral Home & Crematory in Morehead City, NC.