Bless Your Spoon: Back country cooking over open flames at Bethabara 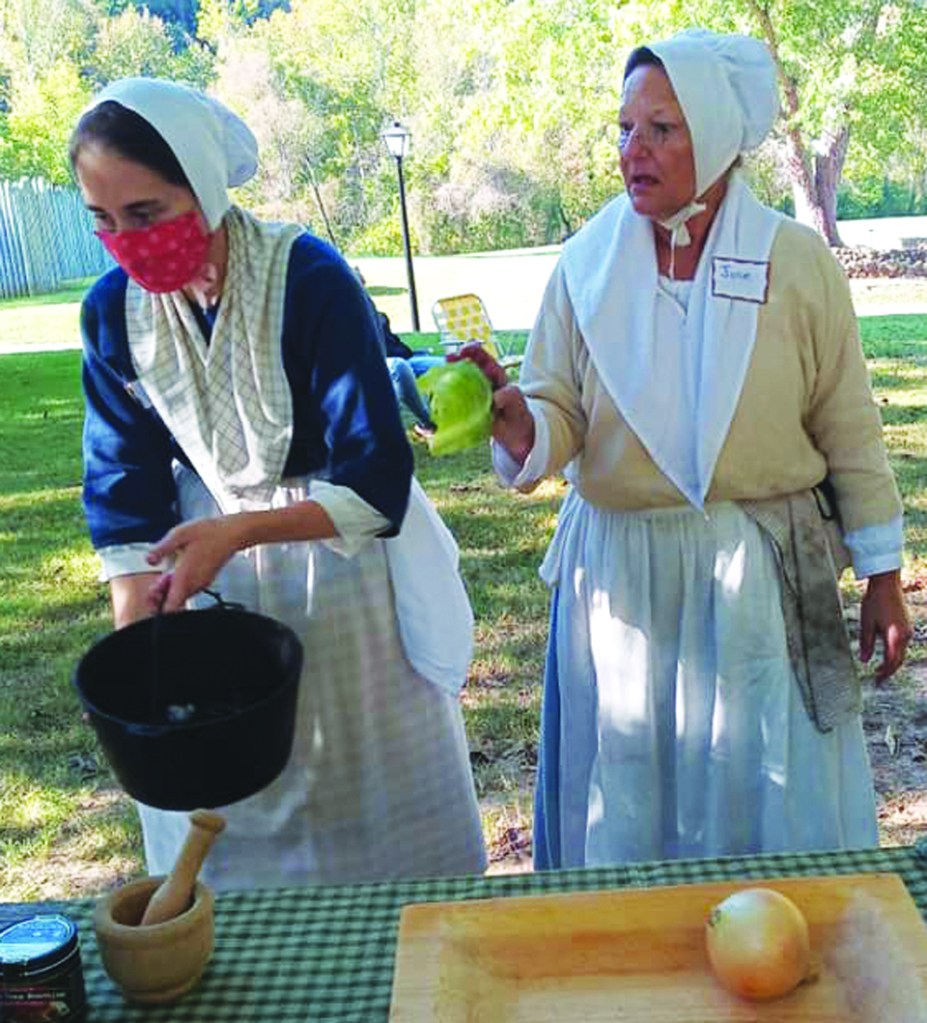 GOOD CABBAGE SALAD (18th Century)
1 head of white cabbage
1 gill or ½ water glass good fruit vinegar
2/4 lb. butter
All-purpose flour
Salt
Red pepper
3 beaten eggs
Wash a nice, fresh head of white cabbage and cut out the heart. Shred fine on a cabbage plane, put in deep porcelain bowl, and pour the following mixture over it. Take 1 gill or ½ water glass of good fruit vinegar, 2/4 pound of butter cut into 4 pieces and rolled in flour, 1 small salt spoon of salt, and about as much red pepper. Mix this well. and let it come to a boil in a saucepan. Beat the yokes of 3 eggs, and as soon as the above mixture begins to boil, take it from the fire and stir in the beaten eggs. Then pour all of this hot over the shredded cabbage and mix it thoroughly with a spoon.

POTATOES WITH MUSTARD (18th Century)
2 ½ lb. potatoes
2 rutabaga
2 white onions
Butter
2 Tbsp. ground mustard
Chopped parsley
Wash and peel potatoes. Cut into round slices, but not too then. Rinse in fresh water. Chop rutabaga and onion and set aside. Set potatoes in water over fire and let cook until soft, but not until they begin to fall apart. Drain off water. Melt some butter in a shallow pan, pour the potatoes in, and let simmer a little in butter. Stir in two spoonfuls of mustard, just enough hot meat broth to equal, but not cover the potatoes. Season with salt. If this makes too much liquid, bring to a boil and reduce. Pour potatoes and mustard into a deep serving dish. In a saucepan, saute chopped rutabaga and onion in butter for a few minutes but not over a hot fire. Pour this evenly over potatoes and serve.
JOHNNY CAKE (18th Century)
1 pint of whole milk
3 pints Indian meal
½ pint all-purpose flour
Variations included using water, instead of milk, adding salt, molasses, or shortening. Pumpkin, potato, or other starch was used if flour or Indian meal was in short supply. The batter would be fried in a pan or cooked on a griddle, or made stiff and baked before the fire on a bannock board. Sometimes the batter was placed directly into hot ashes to bake and then washed off before being eaten.

COOKED VEGETABLES (18th Century)
Fresh vegetables must be cooked until completely, through and through, soft. Clean them thoroughly to rid them of insects. Boil quickly in a good quantity of water and if boiling continues uninterrupted, they should be ready as soon as they sink to the bottom of the pot.

MUSTARD (18th Century)
When you want good mustard for the table, take a spoonful or two of this flour (ground mustard seed) and as much boiling liquor from the pot, where beef or pork is boiled, as will make it of the consistence you desire. For want of such liquor, boil a little salt and water together and mix your mustard flour with that.

POWDERED BEEFE (18th Century)
Take meat liquor from the pot and boil down. Allow to dry. Break in lumps or grind to powder. This will give you pocket soup easily carried.