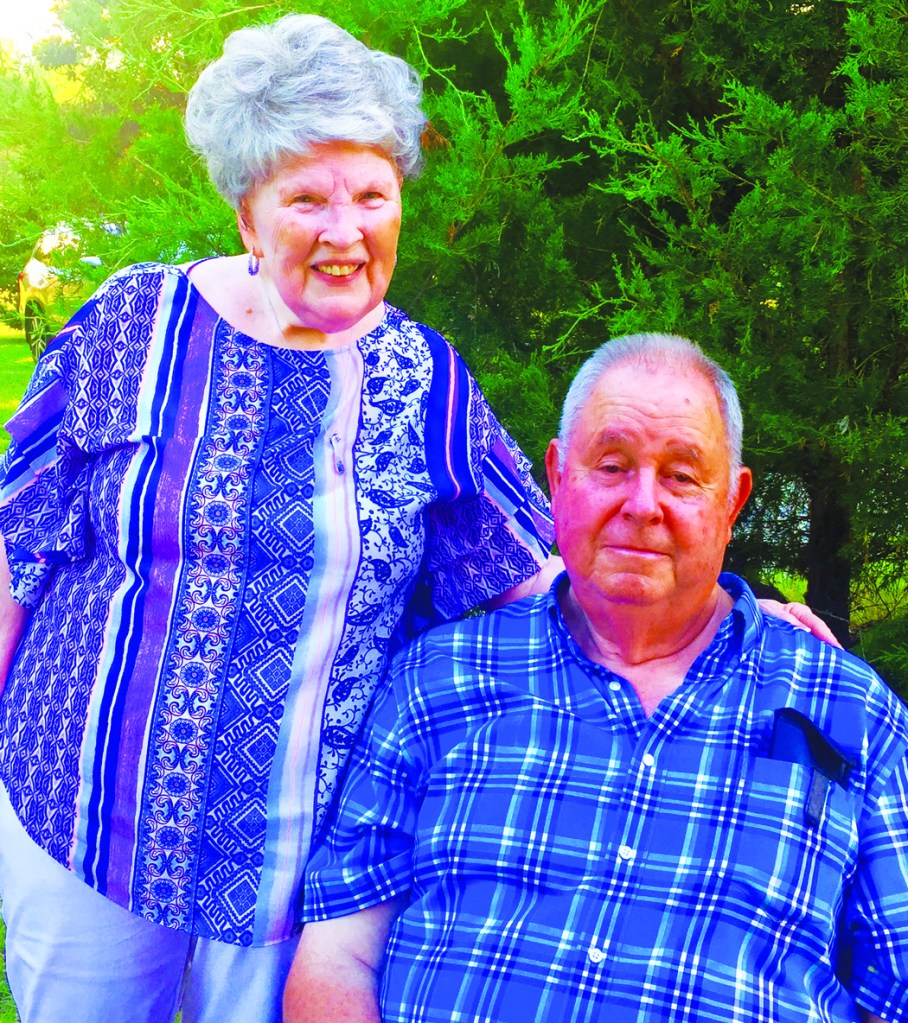 I had the chance to sit down with local residents, Gail and Pete Frye, whose romance continues to flourish. After 56 years of married togetherness, the couple can attest to one certainly; those who cook together, live happily together. These two have kept a romance sizzlin’ ever since they met.

While Pete was born and raised in Mocksville, Gail was from the Franklin township of Salisbury. Her parents owned Franklin Grocery Store.  After getting married, Pete and Gail lived with her mother in the family home place for 6 years. In 1971, they returned to Mocksville and built a home on some land that belonged to Pete’s family.

I was curious how the delightful couple met.

“Where is Dragon Town?  I’ve never heard of that town.”

“You met at Dragon Town?”

North Carolinian slur might differ from my Tennessee mountain drawl – but teenage pasttimes hadn’t changed much.

Memories came to mind of how we, as teens, “circled” around the drive-in at Shoneys.

When Gail and Pete were growing up, the thing to do around these parts was cruise in separate cars from Zestos Drive-In, the ice cream shop in Salisbury. They’d drive along Main Street down to the Whataburger and back up to Zestos. Teens either cruised a route along Stratford Road in Winston Salem or made the rounds on the Salisbury circuit.

One evening, before Pete met Gail, he brought a girl with him to Salisbury. He parked his 1956 Ford Fairlane behind Zestos. Things didn’t go well with his lady friend, and Pete wanted to take her back home. But the girl had other ideas. Not wanting to return home – she ran off with another boy. Later that evening, as Gail cruised around Zestos in her 1953 Buick, Pete leaped onto the hood of her car. Afraid she might run over him – Gail finally gave in to his requests, allowing him to get into her car.

As they say, the rest is history, and from that point on – love was brewin’. The young couple kept late hours that night – talking.   Today, Gail and Pete have a lifetime of romance under their belts.

These two are known for their generosity – and for their fun get-togethers, including delicious food. Before the pandemic, the couple’s annual chicken stew had been held annually for close to 25 years. All they had to do was phone up friends – issue the invite – and a fun party was on.

“Friends would bring people we’d never seen before – their friends – we didn’t know who was coming, but the more the merrier. They came anywhere from Fayetteville, Raleigh, and Burlington to here,” said Gail.

Their parties have drawn in as many as 400 people and maybe more than that.

For the stew, Pete invented and built by hand a large cast-iron pot – called a warming pot. Ellen Bishop is Pete’s sister – and like most people, she’s amazed at her brother’s ingenuity. She described the warming pot.

“Over the years, he’s been incredibly inventive with the “junk” no one else sees a use for.  This is a description from the ground up of one of his undertakings built from castoffs. The legs came from that old trampoline the kids had outgrown.  A frame was built on top of these legs and held together by a stainless steel band. This part, underneath the pot, has a door welded on it to allow hot coals to be put in to keep the stew hot. The next level is the old cast iron pot that had been sitting out in the woods. This pot holds 150 to 200 gallons of water which will be heated when the coals are put underneath.  The top built over this cast iron pot has four openings that will hold four 5 1/2 gallon cooking pots.  These will sit in the hot water to keep the contents warm.”

For the amount of stew, Gail and Pete prepare about 10 pots using 5 stoves. The equipment’s housed and stew’s prepared in outbuildings that Pete built. When the flour and milk have been added, the stew has to be continually stirred to prevent it from sticking. The stew pots are transferred to the warming pot, which works similarly to a double boiler – preventing any burning or sticking.

“Family and friends gather to help prepare for the event,” Ellen said. The preparations start with Gail purchasing approximately 50 large packs of chicken breasts with bones and skin. These are cooked early on the morning of the stew. After the skin and bones are removed, the meat is chopped up in small chunks. Then, Gail does her magic with flour, milk and seasonings to create a delicious stew.”

Gail found her recipe for chicken stew in a Better Homes and Gardens magazine, choosing it because the ingredients were for a smaller yield. She edited the recipe to make a greater amount so the stew would feed more people.  Guests bring boxes of crackers, soft drinks, and their own bowls if they want to. Generous by nature, Gail and Pete also serve hotdogs, including chili beans, and provide sticks and marshmallows for roasting after the meal.

“All they have to do is walk in, and they get something to eat. We’ve only run out of stew one time,” said Pete.

Quite the baker, Gail makes 20 cakes for the chicken stew. There are freezers full of pre-baked and iced cakes ready to thaw out – and she usually bakes two of each. Among her many specialties are fresh sheet and layered coconut cakes with cream cheese icing, black walnut pound cakes, six-flavor pound cakes with nuts, plain pounds, strawberry, and German chocolate layer cakes, carrot cakes, and Italian cream cheesecakes – just to name a few of her favorites.

Guests always comment about how well her cakes rise. Gail believes the thicker tube pans, the better and moister your cakes will turn out.

“I was using my mom’s cake pan from years back, and maybe it got a hole around the tube and was letting air in – but I got two new pans, and after that, we had no more problems with them.”

One thing Gail’s excited about is her oven – it’s wider and deeper than standard. When time came to purchase a new one, she bought the biggest oven she could find. Hers will hold three 9-inch cake layers or 2-pound cakes at a time. The reason Gail had to replace it – she baked so often that the hinge broke on the oven door.

And then there’s Pete – he’s good at making candy. Pete enjoys cracking all the nuts, which are bought in the hull. One year, he shelled 700 lbs. of nuts.

The couple goes down to Rowan County where their niece, Heather, who is Ellen’s daughter, has pecan trees in her yard. Lately, however, they’ve been having to buy English walnuts because they couldn’t find any pecans.

“Every other year the pecans don’t do well,” Pete said.

Black Walnut pound cakes were Pete and Ellen’s aunt, Inez’s, specialty.  Every fall, Aunt Inez would come over to their house for the black walnuts.

“Before she came, our mother (Inez’s sister) would have the young’uns pick up buckets of walnuts, put them in the driveway to be driven over to get that outer husk off and then bag them up. Aunt Inez had the harder job of cracking those shells though, picking out the fruit, and baking those wonderful sweet cakes,” said Ellen.

I asked Pete what he thought about having a wife who’s such a good cook. A man of few words, he replied: “Well, I’ve just been here with it all.  I help her with what I can.”

“You’ve been blessed with a wife who cooks such good food, right?”  I asked.

“Well, I could have had one who would’ve done nothing. That’s what I left sitting in town that night.”

We all laughed. Sounds like Pete’s gonna keep her.

In a mixing bowl, put butter, Crisco, and sugar, mix up.  Add eggs one at a time. Combine flour with baking powder. Alternate flour mixture and milk starting with flour and ending with flour.  Add flavorings. Mix but do not over-beat.    Put 1 cup crushed pecans in bottom of buttered and floured 10-inch tube pan. Add cake batter.  Bake in COLD OVEN 325 degrees for 1 hour 15 minutes.  Let cake sit about 5 minutes to cool. This is one of Gail’s most requested cakes. For the topping, combine sugar, water and flavoring. Boil in microwave for 2 ½ minutes. Drizzle syrup over top of cake.

To the recipe for Six Flavor Pound Cake, eliminate all flavorings and nuts from recipe. Then add vanilla and lemon extracts and combine thoroughly.

To the recipe for Six Flavor Pound Cake, eliminate all flavorings and nuts from recipe.  Then add 16 oz. Hershey’s chocolate syrup to recipe.

In a mixer bowl, combine butter, cocoa, extract, water, and confectioners sugar. Frost cake. Gail fills up the hole, too.

In a mixer bowl, cream margarine, Crisco, and sugar together. Add eggs one at a time.  Sift flour and combine with baking powder. Add flour mixture to egg mixture while alternating with half and half. Add flavorings. Mix well. Fold in nuts. Pour into buttered (or Crisco) & floured tube pan. Bake in a 325-degree oven for 80 minutes.

I’m not sure where this recipe came from; I’ve had my handwritten copy for years and years.  It’s worth the effort.