From the Yankees to the Braves: New Mocksville company helping keep fans safe 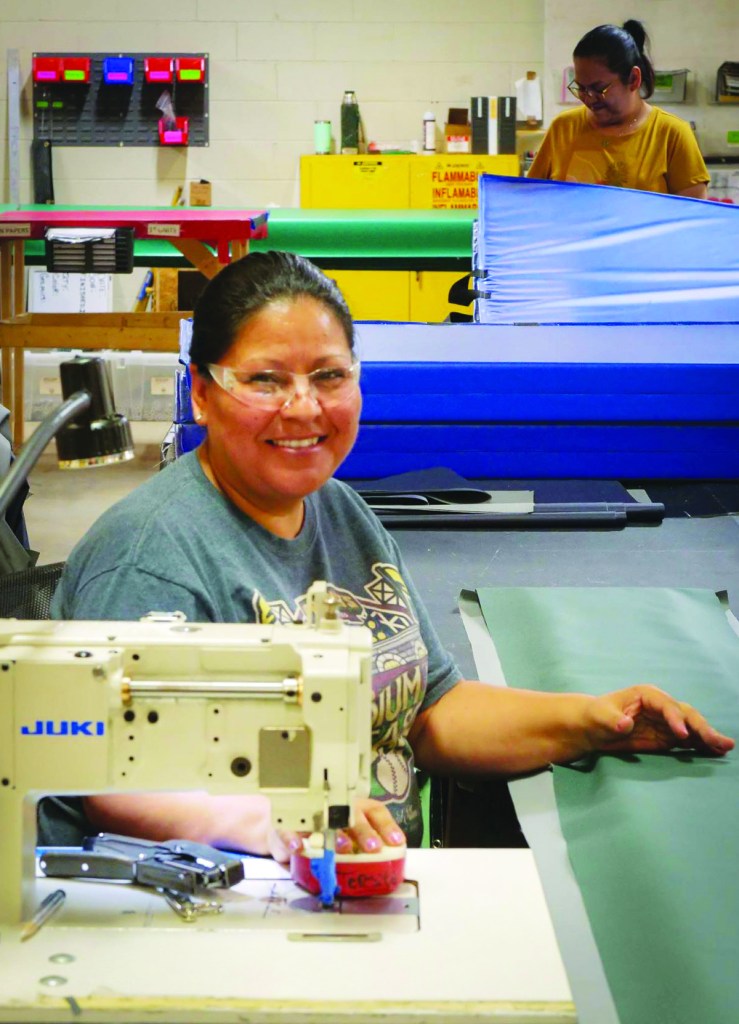 Teresita Romero is sewing mats at Sportsfield’s facility in Salisbury.

The next time local baseball star Whit Merrifield crashes into the wall catching a flyball, the pads protecting him may have been made by a company that also calls Davie County home.

For more than 20 years, Sportsfield Specialties, whose central headquarters is based in Upstate New York, has been the industry-leading manufacturer of athletic field equipment for all levels of play.

Their soft goods operation, which produces netting systems, padding, and mats, will move from its location in Salisbury to a new facility in Mocksville. The impetus for the move is the increased demand for products like large-scale barrier netting systems and sweeping graphic wall pad displays.

Sportsfield has been at the forefront of MLB’s protective netting expansions since 2015 when the league’s commissioner recommended clubs expand safety barriers down the foul line. Its product can be found in 23 MLB stadiums and countless practice facilities.

The company’s equipment can be found in schools, parks, and universities across North America and the stadiums of high-profile teams like MLB’s Atlanta Braves and New York Yankees; NFL’s Minnesota Vikings and Miami Dolphins; and Major League Soccer’s DC United and St. Louis City SC.

In the Tarheel State,  Sportsfield has outfitted the Bank of American Stadium in Charlotte used by the Carolina Panthers,  Wake Forest and Duke universities, and the ballparks the Kannapolis Cannon Ballers, High Point Rockers, Charlotte Knights, and Durham Bulls.

“We’re manufacturing products that solve problems and clients know they can trust. Our success has led to more demand, and as a result, we’ve grown out of our Salisbury plant.”

Schwirtz said the new 77,000-square-foot facility at 155 Boyce Drive increases Sportsfield’s production space by approximately 11,000 square feet and the offices by 7,000 square feet. In addition, the company announced a $2.3 million building expansion project, which will add another 30,000  square feet to the plant. The move is slated to add approximately 20 new jobs over the next two years in production, operations, engineering, and administration.

“Most of our current employees will make the move to Mocksville and are looking forward to working at the new facility,” Schwirtz said.

Sportsfield President Sean Clark said: “This initiative provides our operations and production team with the necessary space, resources, and working environment to perform at the highest level possible.” He added the move and expansion will further Sportsfield’s ability to “deliver a standard of product quality and service that clients depend on while supporting the company’s commitment to growth and market innovation.”

The team at Sportsfield isn’t only excited by the new facility, they are looking forward to joining the Davie County community.

“We’ve enjoyed getting to know fellow business leaders and local officials, who’ve all made us feel welcomed in Mocksville. We’re proud to be joining this community and look forward to becoming a contributing member,” Clark said.

Terry Bralley, president of the Davie County Economic Development Commission, says Sportsfield is a welcome addition to the community. He said the Town of Mocksville and Davie County are home to numerous well-known manufacturers producing items such as textiles, furniture, and commercial airline components,  but until now, hasn’t included a sports equipment manufacturer.

“Economic diversity is essential for growing a healthy and sustainable economy,” said Bralley. “It opens the doors for providing the goods and services a growing community needs. We are pleased to have hit another home run and stepped into the major leagues as we welcome Sportsfield Specialties to Mocksville.”

Clerk retiring after 36 years at the courthouse