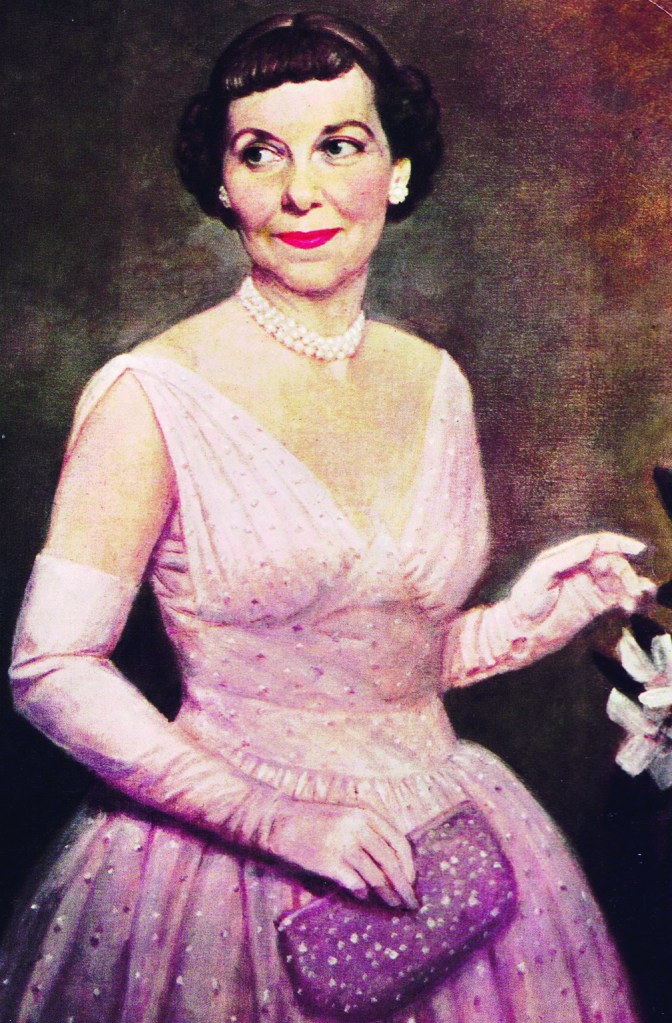 A visit to the Eisenhowers’ retirement home in Gettysburg, Pa., confirms that fact. Mamie’s bedroom is a sea of pink. The walls, the bed, the sheets, the lampshades, and even the wastebaskets are pink.  Mamie seemed to love to surround herself in a cloud of pink.  The bathroom which adjoins the bedroom is also all pink—pink tile; pink fixtures, including a pink toilet set; and pink towels.

In a portrait of Mamie Eisenhower which is hanging in the White House, she is wearing a lovely formal pink dress, wadorned by hundreds of pink pearls. Also, she is wearing pink gloves, and shoes, and is holding a pink purse.

Mamie Geneva Doud was born in Boone, Iowa, in 1896. Her parents were Elivera Carlson and John Sheldon Doud, a successful businessman who was involved in the meat packing industry and who was able to retire when Mamie was only 7. Mr. Doud moved his family to Colorado, but decided that it was too cold there in the winter so he bought a vacation home in San Antonio, Texas.  Mamie went to the best schools, including Miss Wolcott’s Finishing School. She was afforded other luxuries which wealth provided.

While vacationing in San Antonio, Mamie met Lt. Dwight Eisenhower, a recent graduate of the West Point Military Academy. Dwight had not been particularly interested in girls, but he was taken with “a vivacious and attractive girl, smaller than average, saucy in the look about her face and in her whole attitude.” Those words uttered by Eisenhower about Mamie Doud are found in the book “The First Ladies” by Margaret Brown Klapthor. Mamie was equally enamored by the young officer.

That meeting resulted in a courtship which lasted almost a year. The young couple, who met in October of 1915, was married on July 1, 1916, at the Doud home in Denver, Colo.

As a young Army wife, Mamie faced and accepted the problems and privileges which accompanied that position. When Dwight was packing to leave for an assignment, his wife was whining a bit about being left alone.  Dwight stopped packing, looked at Mamie, and said: “My country comes first and always will.  You come second.”

Mamie was shocked to say the least, but she realized that she must accept that reality. She never complained again about her husband’s assignments.

There were many different posts in the 37 years that Dwight D. Eisenhower serve in the U.S. Army.  Twenty-seven times Mamie packed up their households to move to a new post.  They lived at a number of different Army posts in the United States and in a number of distant places including France, the Philippines and the Panama Canal Zone, which presented the most challenges. Not only was the heat in Panama almost unbearable, they had to share their home with critters. That bothered Mamie immensely, but she made the best of it.

At every place they lived, the Eisenhowers entertained extensively. Mamie  had learned to entertain when she was young, and she always enjoyed it—in fact, their quarters at one posting was nicknamed “Club Eisenhower.”

In January of 1917, the Eisenhowers’ first child, Dwight, was born. He was a delightful child who was doted on by both of his parents. Dwight spent hours caring for and playing with Doud, who was called “Icky.” In 1921, “Icky” died from scarlet fever; both of his parents were devastated. They probably mourned for the rest of their lives over the death of their dearly beloved “Icky.”

About a year after the death of their first son, the Eisenhowers had another son that they named, John Shelton Doud Eisenhower.  Dwight was never quite as close to his second son as he was to his first. It seemed that the death of his firstborn set up some kind of shell which kept Dwight from getting really close to John, who actually followed in his father’s footsteps and became an Army officer.

Dwight Eisenhower rose through the ranks and finally became a Five-Star General, one of only nine American men who has reached that rank. Eisenhower was Commander of the Allied forces in Europe, and he was responsible for planning the successful D-Day invasion of France.

During the World War II while General Eisenhower was in Europe, his wife lived in an apartment in New York. They stayed in touch through letters, and, at least once, he was slipped into her apartment when he was in this country for a secret planning meeting.

While General Eisenhower was stationed in Europe, there were rumors that he was having an affair with his female driver.  Mamie seemed to handle those rumors well, and she welcomed her hero husband home after the war was over.

Even though they did not know if Eisenhower was a Democrat or a Republican, both parties tried to get the popular hero as run as their candidate for president in 1952.  Eisenhower finally said that he was a Republican, and he agreed to run for the office of president against the Democratic candidate, Adlai Stevenson. Richard Nixon was chosen as Eisenhower’s running mate.  The Eisenhower/Nixon ticket easily won.

Mamie Eisenhower moved into the position of First Lady with ease.  The following quotation from the book, “First Ladies Women Who Called the White House Home” by Beatrice Gormley, describes Mamie’s  role as First Lady well: “Mrs. Eisenhower entertained a steady stream of heads of state and foreign leaders, enjoying her role as White House hostess, (although the White House staff felt that she directed the executive mansion with military discipline). President Eisenhower did not discuss his work with her, nor she with him;  they agreed that she would run the White House while he ran the country.”

It is said that Mamie only visited the President’s office in the West Wing four times.

The chief usher at the White House was amazed when he was summoned to the First Lady’s  bedroom and found  her still in bed, a pink bed because she had also turned her White House bedroom turned into a cloud of pink. Mamie not only had breakfast in bed, but that was also where she  did her work—making plans for social events, answering mail, etc. She sometimes even conducted staff meetings while in bed, and it was there that she listened to her favorite soap opera, “While the World Turns.” No one was allowed to make an appointment for the boss while her favorite soap was on. Mrs. Eisenhower said, “Every woman over 50 should stay in bed until noon.” (Sounds good to me.)

President Eisenhower had a heart attack so his wife did not want him to run for a second term, but run he did. Mr. Eisenhower served as President for four more years.

In 1961, the Eisenhowers moved to the only home which they ever owned, located near the battlefield in Gettysburg, Pa. They spent eight happy years there before the President died in 1969.

After her husband’s death, Mamie continued to live at Gettysburg for 10 more years. She died in 1979 and was buried beside her husband in Abilene, Kan. at the Place of Meditation in the Eisenhower Center.