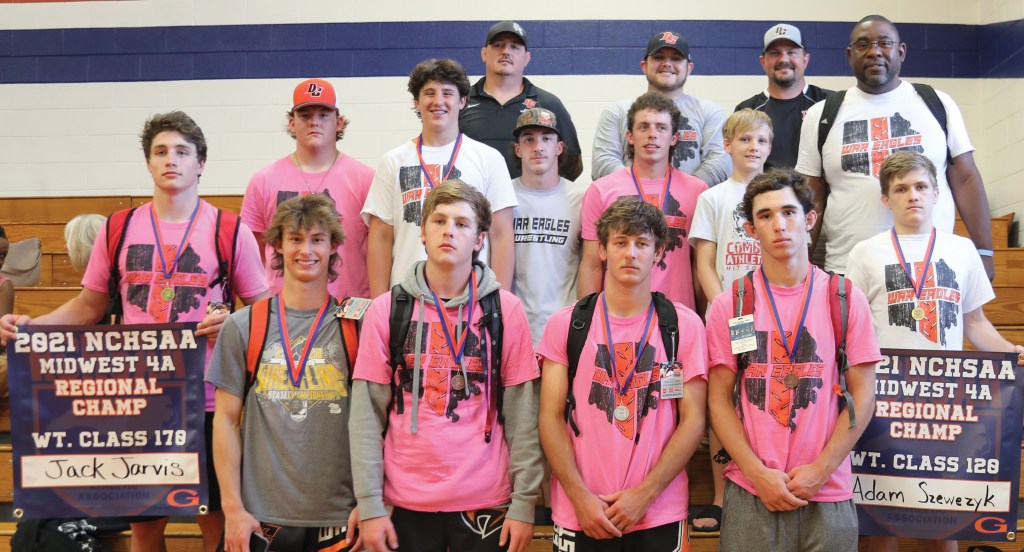 Davie wrestlers finished fourth out of 20 teams in the Midwest Regionals at Glenn High School last week and qualified for the state meet. Two wrestler won regional titles in their weight classes. — Photo by Ashley Bowden

As expected, Northwest Guilford won the team title with 154 points, but it was congested at the top. West Forsyth (149), Pinecrest (148) and Davie (142) were within 12 points of the leader, while Hickory Ridge (89) was a distant fifth.

The top four finishers in each weight class earned berths to the state meet. Although the War Eagles did not fill three of 14 weight classes, their 11 guys combined for a 19-11 record as eight qualified for the state.

“It was exciting,” coach Perry Long said. “We wrestled well. Adam and Jack were on a mission. All the guys came to wrestle all day.”

“If we’d had a full lineup, we would have been in the running for a plaque,” Long said. “We might have won it.”

Assistant coach Mark McK-night added: “The three ahead of us all had full teams; they all had 14 in it.”

Jarvis: “It’s great to see your teammates succeed, and having six people make it to the finals and eight overall (qualify for the state) is pretty good.”

“I had a pretty good day,” Jarvis said. “I felt confident that I could win the region, but I was kind of surprised that I was able to go through the way I did. At this point, I expected to win the region, but the bigger goal is a state championship. The regional was a big confidence-booster for me, so I feel I can make a good run (at a state title).”

That Jarvis tore through three opponents in an aggregate two minutes, eight seconds is quite amazing. The junior raised his record to 26-0.

Long: “He had a little vinegar in his blood today. He got mad one time because the guy shot on him. I slapped his hand and he said: ‘I expect to win.’”

McKnight: “He didn’t want to be out there any longer than he had to, and he was glad they were on the mat with him. After his semifinal match, his hair wasn’t even wet. He wasn’t even sweating.”

At 120, Szewczyk received a first-round bye before pinning Ragsdale junior Kukuw Kodi (7-8) in the first period. He faced two tough opponents after that, but made both wins look easy. In the semifinals, he major decisioned Glenn junior Isaiah Wilson, who ended the day with a 25-5 record, including two major decision losses to the Davie senior.

In the finals, Szewczyk was opposed by Northwest Guilford sophomore Will Gibson, who defeated Szewczyk twice in the past. Szewczyk flipped the script, winning 9-5. Making the win all the more impressive, Gibson reached the finals with back-to-back pins and will enter the state with a 29-2 record.

“Last weekend I went up to LMU (Lincoln Memorial University) for a visit and met up with my (future) coach,” Szewczyk said. “He helped study my film and told me what I needed to touch up on, especially the matches I had against (Gibson). He showed me a lot of stuff, like making sure he didn’t get to my legs. I was in control the whole match. Toward the end of the third, he did throw in a headlock and send me to my back and got three (points) there. But I was able to pop my head out.”

McKnight: “He handled (Gibson) from start to finish.”

Szewczyk: “I love it. I like that the hard work is showing off. But I know it’s not over yet. I’ve got to work toward the states now. I mean, me finishing as regional champ in my eyes doesn’t mean as much as me going to states and doing good.”

At 126, junior Hill pinned East Forsyth junior Gustavo Salazar-Salano (6-20) in the first period before winning a 4-2 decision over Northwest Guilford freshman Dylan Pepin (9-1). He took a nine-match winning streak to the finals, where he lost 11-9 to Hickory Ridge sophomore Hunter Jones (21-2).

At 152, junior Webb got a bye before decisioning West Forsyth senior Claudio Pandolfi (8-8) and NW Guilford junior Colin Queen (13-6). That meant two unbeatens would collide in the finals, Webb putting his 26-0 record up against High Point Central’s Joseph Sealey (19-0).

Sealey, an absolutely ridiculous freshman, unearthed Webb’s mortality with a technical fall. In fact, Sealey teched all three of his opponents.

“That kid is tough,” Long said. “He scored 18 or more points against everybody. He was putting on a clinic. He’s legit.”

At 145, junior Bailey got a bye, pinned Hickory Ridge freshman Logan Lightner (4-3) in the first, lost 7-2 to Grimsley senior Toure Moore (16-2) and lost by major decision to Page junior Jacob Woodburn (5-1). Bailey’s 15-match winning streak ended in the semifinals, but he will join seven teammates Saturday at Glenn.

The season ended for three War Eagles. At 220, freshman Brysen Godbey pinned Hickory Ridge senior Josh Hurd (10-10) in the first before losing 7-0 to Porter Ridge sophomore Nathan Carnes (21-0). Carnes went on to first place, getting a pin in the finals. At 195, sophomore Charlie Frye lost 3-2 to NW Guilford junior Donorris Abbew (20-10), who went on to finish fourth. And at 138, junior Sam Collins was pinned by Pinecrest sophomore Elijah Ybarra (25-5).