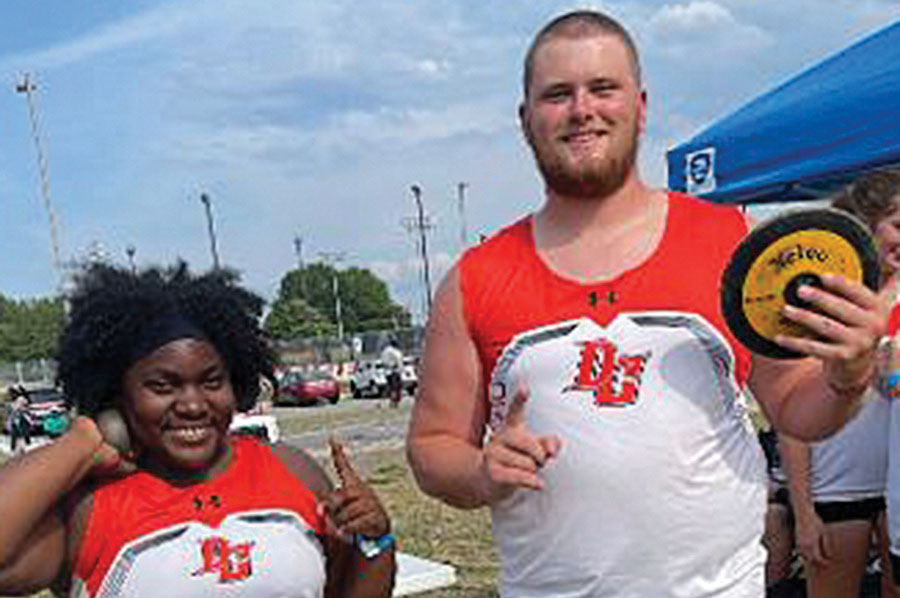 It was a night of triumph and heartbreak for the Davie track team Saturday as War Eagle Stadium was the site of the 4-A Midwest Regional.

Battling 18 other schools, the Davie boys turned in one of the best performances in school history but went home still wondering what could have been. When the final scores were tabulated, Davie earned a third place finish as it was narrowly edged out for the runner-up spot by Hickory Ridge. Reagan dominated the meet with a final tally of 104.5 points. Hickory Ridge followed with 73 while Davie and Myers Park shared third place honors with 68. Reagan and West Forsyth took home the top two spots in the girls competition as the War Eagle ladies placed 12th.

Davie will be represented at the 4-A state championships this Friday at NC A&T by Spencer Williams, Palmer Williams, Ivan Poag, Bryson Robinson and Monica Long. Notably absent from the list is senior JT Allen, who crashed to the track late in the 110 hurdles race and was knocked out of the meet with an injury.

The War Eagle boys did most of their scoring in the field events behind epic performances from Poag and Spencer Williams. Poag scored a team leading 24 points with three second place finishes, thus advancing to the state meet in the high jump (6-2), triple jump 44-2) and long jump (21-10.5). Robinson also punched his ticket to Greensboro with a fourth place finish in the high jump (6-0). Williams was dominant in the throws as he crushed the field in the shot put (60-10) and discus (181-3). His discus mark broke the Midwest Regional meet record, and he will enter the state meet with the leading marks in the state in both throws events. Younger brother Palmer also advanced with his third place finish in the discus (122-2).

Elsewhere in the field events, Davie picked up three points from Robinson’s sixth place finish in the triple jump (41-4). And in the pole vault, Austin Kiser (10-0) and Daniel Horton (9-6) each established personal bests while adding a combined six points to the team total.

In the running events, the 4×800 relay team of Sebastien McEwen, Cole Swade, Will Allard and Cooper White got things started with a ninth place finish. In the 1600, Davie was well represented as Caleb Young led the way with an eight place finish. He was followed by teammates Owen Sulecki and Reece Yount in 10th and 12th place, respectively. Andrew Brown had an impressive showing in the 3200 as his sixth place time of 10:08 was a huge 16-second personal best.

The Davie girls were led by Monica Long, whose personal best effort in the shot put (35-1.75) earned her the gold medal and a trip to Greensboro. Long also grabbed eighth place in the discus (77-8) to lead a trio of War Eagles in that event as Gracie Wilson (67-2) and Krystal Davis (61-11) placed 10th and 11th.

Freshman Jaylen Clement-Green capped a successful rookie campaign by placing 10th in the long jump (13-5) and eighth in the 100 with a personal best of 12.72.

“Coming into the meet we were confident that the boys would be in the top five,” said Coach Rob Raisbeck. “We also felt like we had a shot at the top three. But as it turned out, we left a lot of points out there and in retrospect should have been second. Still, third place in a regional meet is pretty gratifying and I can’t tell you if we have ever placed that high. I am pretty sure it hasn’t happened in at least 20 years. But now we set our sights on the state meet Friday, and even though we are only taking a handful of athletes we have a chance to do some good things there.”

Raisbeck also gave thanks to a host of people who have contributed to the success of Davie track and field this spring.

“We hosted the 1-A Midwest Regional Friday night and of course the 4-A meet Saturday,” he said. “It takes a tremendous amount of work to pull off a two-day event with 40 high schools. And to be as successful as we have been this season takes a tremendous amount of dedication from our staff. Coach (Marc) Sweet was our meet director and did an outstanding job and has coached our sprinters and jumpers. Coach (Diane) Williams has done a great job with the throwers and coach (Ted) Kiser was able to get all three of our pole vaulters into regionals. We also coaxed coach (Becky) Miller out of retirement and she did a great job assisting with a bunch of our events. I also want to acknowledge our AD, coach Mike Absher; Bob Bailey, who helped with facilities and driving our bus when needed; and also our parents who served as volunteers at our home meets. And not to be forgotten, Ms. Valentine puts in a tremendous effort with concessions. We owe a debt of gratitude to all of these folks. Their contributions to our program are greatly appreciated.”

The Davie cross country team is already starting summer workouts and will be meeting three days each week through July. Any middle school or high school student interested in cross country running is encouraged to contact coach Raisbeck.