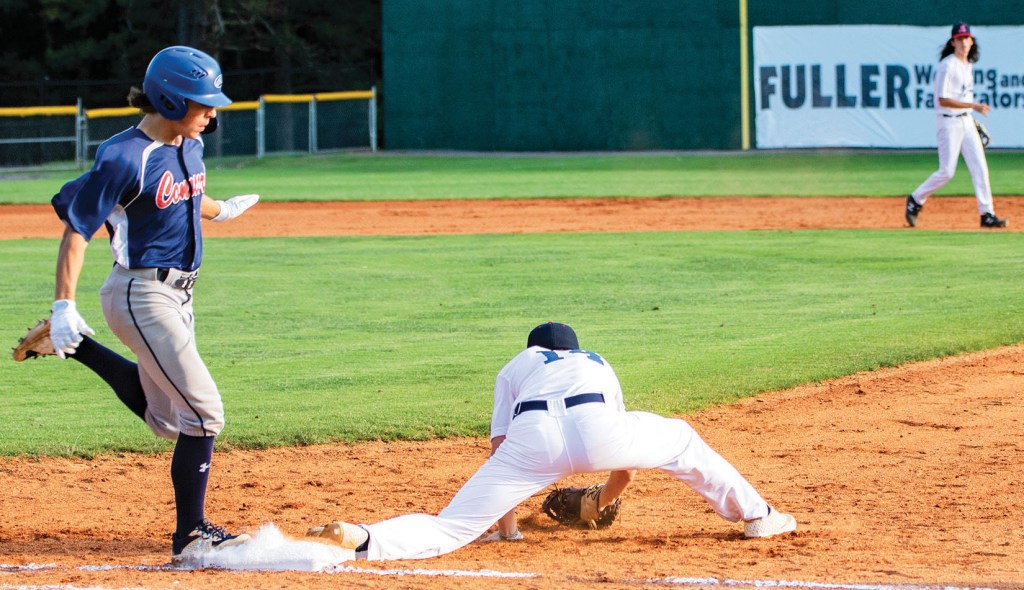 First baseman Matthew Beshears stretches for an out at first base.

The Mocksville Junior Legion Blue baseball team was hanging around with West Forsyth Green in Clemmons on June 16 until everything fell apart in the bottom of the fourth inning.

It was an unsightly 10- run inning for the home team, sending the hosts to a 14-4 victory in four and a half innings.

While coach Tim McKnight liked nothing about the fourth, he said there was no shame in losing to this opponent. The West Green looks like a powerhouse.

The good thing for Mocksville: It was a nonleague game.

“West Forsyth is the only (Junior Legion) program in the county,” McKnight said. “There’s not even a team in Stokes County. They had 80 kids come out (to field three teams). The team we played, most of them are rising ninth graders. Those guys can play.”

Mocksville raced to a 2-0 lead in the top of the first. West was unfazed, scoring four in the bottom half. Mocksville rallied to a 4-4 tie in the third.

The hits were 6-6, but Mocksville made all five of the game’s errors. That was compounded by 10 walks from Mocksville’s three pitchers.

“When the wheels came off, they came off,” McKnight said after Post 174 slipped to 2-1 overall.

Notes: Mocksville has three teams, including the White Junior Legion team coached by Mike Dinkins. The White had a rough opener, losing 11-0 to West Forsyth Blue as part of a doubleheader on June 16.