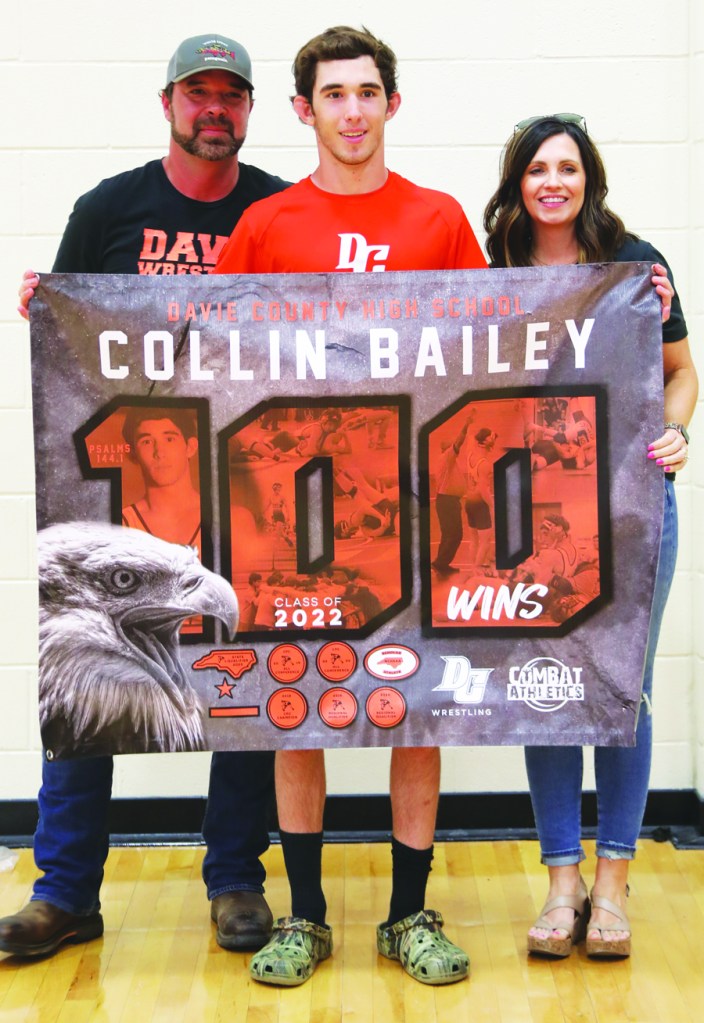 In a home wrestling match against East Forsyth on June 3, Collin Bailey became just the 13th War Eagle to reach 100 career wins during his junior year, which says a lot about Davie’s 145-pounder.

“It’s a pretty awesome feeling,” Bailey said of the small company. “I’m hoping to run my record up a little more this year, next year and maybe be able to put a state title in the Bailey name.”

One of Bailey’s two losses this year was a fluke; he was disqualified for an illegal hold. The other loss was a respectable 8-3 decision to powerful Northwest Guilford senior Riley Edwards, who is 20-0.

“(Edwards is) looking at competing for a state title this year,” Bailey said. “Hopefully I’ll be up there with him.”

Coach Perry Long said: “Collin has always been able to win, but now he wrestles a totally different match. Now he knows how to grind those tough matches out. They all are a lot better.”

The match against East was another Central Piedmont Conference snooze for the War Eagles, who breezed 57-9.

Without question, the most impressive win came from Jarvis, who faced fellow junior Michael Quinones. The East star is 20-2 this season, with both setbacks to Jarvis, who won this one 5-1.

The win kept Jarvis unbeaten at 21-0. Davie’s other perfect record belongs to Webb (22-0).

“His only loss was to Jack at the conference tournament,” Long said. “That kid placed (in the state) last year.”

It was a perfect Senior Night for Szewczyk, Snyder and Downey.

“I’ve gotten to coach them the last two years,” Long said. “I got to coach Adam in middle school (at South Davie) and I coached against Snyder and Downey at Ellis. Being able to coach them at the high school has been a great pleasure. Adam has changed his body over the years. He has worked hard and he’s going to get to wrestle at the next level (at Lincoln Memorial). Getting to wrestle in college is big for him. Those three seniors have so many memories that they’ll talk about the rest of their lives.”