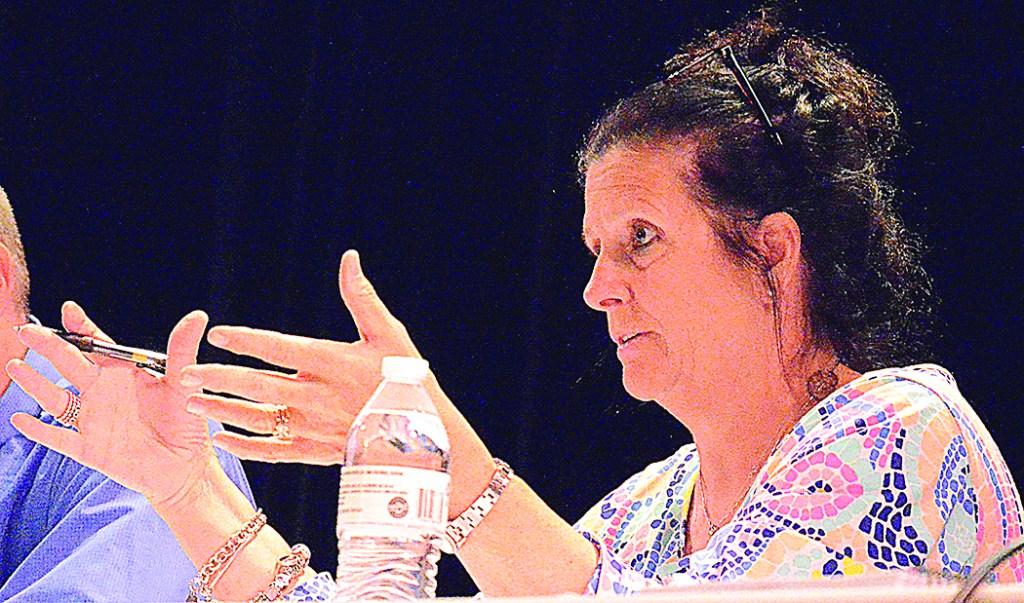 Board member Amy Vaughan-Jones cast the lone no vote in approving a large housing development. - Photo by Robin Snow

The vote on a highway commercial 38-acre rezoning along Yadkinville Road was unanimous; the vote on a 62-acre residential and mixed use development was on a 4-1 vote, with Amy Vaughan-Jones casting the only vote against the request.

Vaughan-Jones asked Andrew Meadwell, planning and zoning director, if the property could be developed without a rezoning. He said it could, with as many as three houses per acre with 30 percent of the land set aside for open spaces. He said most of the property in question is outside the city limits, but within the town’s zoning jurisdiction.

The new zoning will allow up to four housing units per acre.

Three residents spoke against the change during a public hearing. Four spoke in favor of the proposal, as did the expected developer.

Mike Hinshaw said that when his family moved to their Country Lane home in the 1970s, one of the attractions was the zoning of neighboring properties. They knew it was zoned for residential, but not “packed residential.”

Traffic is “horrendous now,” Hinshaw said. He suggested a study to see where roads to the development might connect to Country Lane.

Joyce Whitaker of Country Lane said she has trouble crossing the street now just to get her mail because of constant traffic. Adding 600 more vehicles would be a burden on the roads. She said she had a life-threatening emergency last year, and is not sure if she would have lived if it had taken EMS any longer to reach her residence.

“Mocksville is not just buildings and industry, it’s people,” she said. “And the board members need to listen to the people.”

“We zoned that property for a reason … unless there’s a big reason to change,” said Lester Cozart. “What is this community going to look like in 40 years? Let’s think about the future.”

Farren Shoaf, local real estate agent, said the project is needed because there is a serious housing shortage in Davie County. “I think this would be good for all of the community.”

Doris Short, real estate agent, agreed. “I’ve never seen a housing shortage like we have.” Potential homebuyers are put on a waiting list, and when a house becomes available, it’s usually under contract within 24-48 hours, she said.

Jack Koontz, who owns adjacent property on Yadkinville Road, said that while he agrees that open spaces are nice to look at, someone like him has been paying taxes on that open space for years and deserve the right to develop. “The people who own that property need to develop it for their needs and the community’s needs.”

Board member Brian Williams made the motion to approve the rezoning, saying that traffic flow is an issue the N.C. Department of Transportation is tasked with handling.

“I see all sides of the issue,” Williams said, citing numbers of the dwindling housing stock in Mocksville.

He said that if you’ve paid taxes on property and get an opportunity to develop it, you should be able to do so.

“There are safeguards in place to protect the neighbors,” Williams said. “The zoning map changes over time. It seems to be a logical progression.” The zoning district requested wasn’t even on the books in 1999, he said.

“Things change. If we don’t grow, we’re going to die.”

Vaughan-Jones, later in the meeting, said she preferred to keep the property zoned as is. “I believe it will be a very good development, but unfortunately, this board will not have any say.”

“There are processes that will have to be gone through before that development occurs,” said board member, Rob Taylor. “We have to trust the process, and we have to grow. we have to meet the needs of peopel coming to work in our community.”

Eric Southern, board member, met with some of the affected residents before making his decision.

“I have confidence in him (Hugh Gilleece, developer). It’s what this town needs,” Southern said.