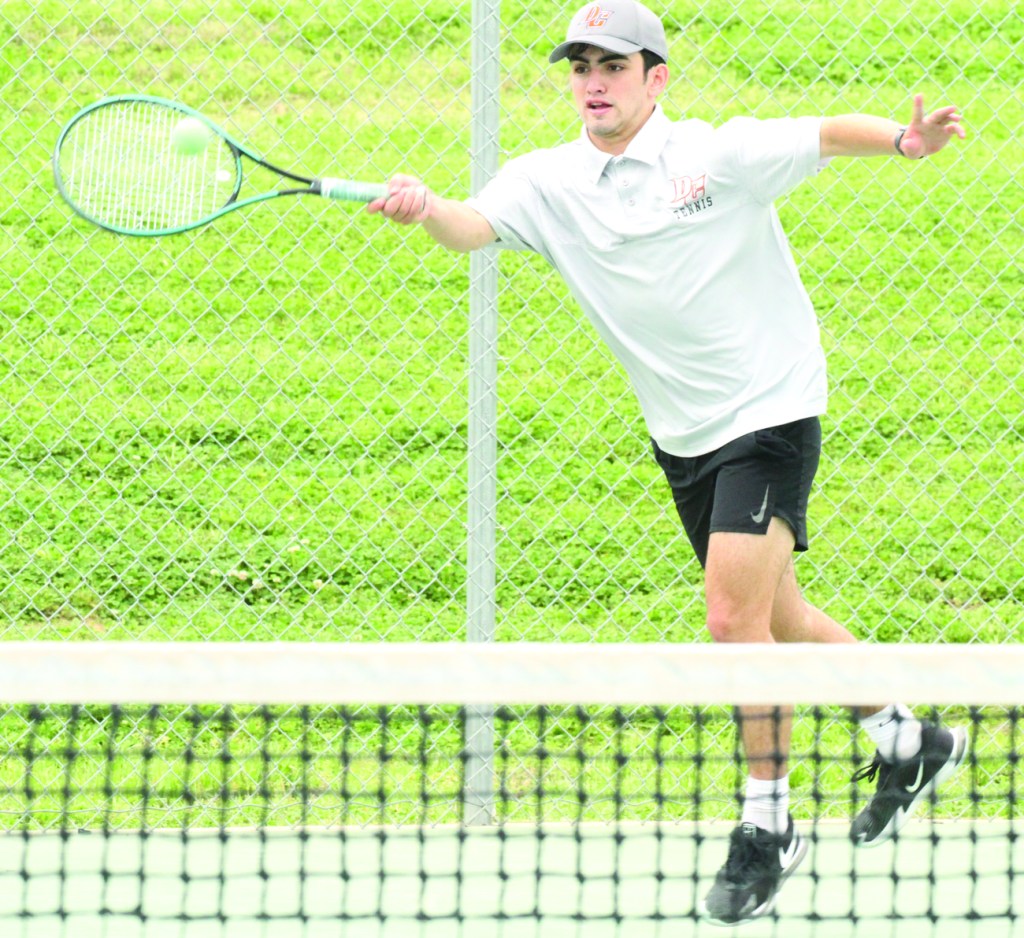 Senior Luke Stillson plays at No. 2.

The Davie boys tennis team’s results last week told us nothing we didn’t already know. Yes, Reagan has been a thorn in Davie’s side, but Davie owns the other Central Piedmont Conference rivals.

After destroying West Forsyth and Reynolds and receiving a forfeit from Glenn, the War Eagles boasted a 24-match winning streak against CPC opponents not named Reagan. (They are 1-5 against the Raiders during that span.) Davie’s last CPC loss against someone other than Reagan was 5-4 to Reynolds on March 29, 2017.

After suffering a rare two-match losing streak against Reagan and nonconference foe Grimsley, the War Eagles righted their ship at West Forsyth on April 12, winning 7-2 in their first match in 13 days.

“They are so improved,” coach Shane Nixon said of the Titans. “To go on the road, the day after spring break and play West Forsyth, coming off a two-match losing streak. Factor all those things in and this was a challenge, and my guys responded to it.”

“The guys beat their rival from across the river,” Nixon said. “Any win against the green is a good win.”

“It’s hard to pinpoint anyone who played better than anyone else, but ironically, I might start with Bryce,” he said. “Bryce played the same kid who had beaten him at our place. Every point was contested; every game went to deuce. Bryce is getting better every day. He’s going to be good for our program for the next little while.”

One day later, the War Eagles put a 9-0 beating on visiting Reynolds.

“Coach (John) Worsley of Reynolds was telling me that his No. 1 and No. 2 have been playing tennis for years,” Nixon said. “He even said just about all his other guys get some lessons. The point here is that this is not a bad team at all. Such a dominating win says more about us than them.”

Davie received a forfeit from Glenn on April 14, pushing its records to 8-2 overall and 7-1 in the CPC.

“Burke is so consistently good,” he said. “He makes me a fan more than a coach most of the time. I just get to sit and watch great tennis; very little coaching required.

“Luke plays with such guts and heart. I love watching him play.

“Jack’s game has come a long way. He serves it so much better than he did before, and his ground strokes are nothing to overlook. But he just plays with a confidence and poise that makes me happy as a dad and happier as a coach.”

“I’ve always said that C is a shotmaker’s shotmaker,” he said. “There really isn’t a stroke he can’t make. The variety in his game is a treat to see.

“Cren has wonderful strokes and when he is on, he is the best five in the CPC. And he is smart. He figures out the game at a high level.”

“Bryce is the newcomer to top-six play,” he said. “He is still learning how good he can be. But the ceiling is so high for him. He is already really good and just keeps getting better.”