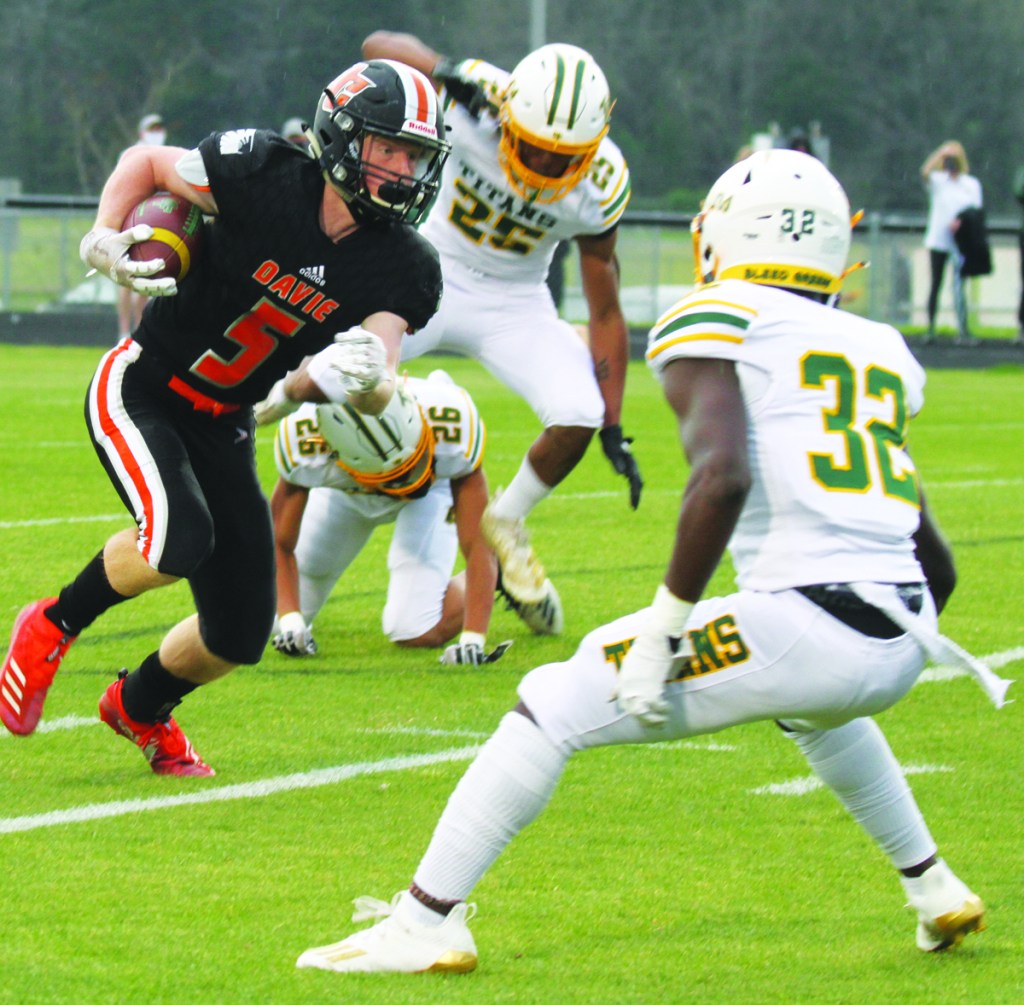 One side was elated (Davie). One side was gutted (West Forsyth). And everyone will remember it, always.

With clutch overtime plays from quarterback Alex Summers and receivers Za’Haree Maddox and Zymere Hudson, Davie’s football team ended its season in storybook fashion, a 36-35 upset over the unbeaten Titans that the War Eagles and their fans will probably still be talking about 40 years from now.

Because of heavy rain in the forecast, the regular-season finale was moved up to Thursday.

Said senior safety Kristian Lyons: “Senior Night. Rivalry week. It doesn’t get much better than this in the regular season. There’s nothing better.”

Senior receiver Jack Reynolds: “We went out with a bang.”

Senior linebacker/nose guard Trevor Richardson: “Amazing. Total and absolute euphoria. We had struggles the last two games (in losses to Glenn and East Forsyth), but to execute at the last second on Senior Night is just amazing.”

On the game’s first possession, five runs by Tate Carney and two catch-and-runs by Brodie Smith paved the way to the West 15. Then Reynolds ran a seam route and Summers placed the ball over a cornerback. Another cornerback, Don Robinson, laid the wood as the ball arrived, but Reynolds held on in the back of the end zone as Davie took a 7-0 lead.

“We pushed out the running back to try to get the defense’s eyes on (Carney),” Reynolds said. “I act as a decoy at first and then I release up field. Alex has to throw it fast, which he did, and I’m going to get popped, so I had to be ready for that.”

With Carney dealing with a knee injury, Davie asked more from Smith. The sophomore was up to the task, delivering 111 rushing/receiving yards in the first half. On Davie’s second series, Smith galvanized his team with a 65-yard TD run. He bounced outside, Maddox cleared the way with a block and Smith kicked into another gear, leaving four Titans in his wake. It was 14-0 less than eight minutes in.

“Brodie is like a secret weapon,” coach Tim Devericks said.

West’s offense answered on its third possession, with Jevante Long running for the final 27 yards of a 66-yard drive and cutting Davie’s lead in half.

But this was the best half of the season for Davie’s defense. West tried an inside reverse on third-and-5 and Justin Hayes came through with a minus-5 tackle. Then Mason Shermer partially blocked a punt as Davie took over at its 39. After Carney caught four straight short passes, Summers hit Smith, who broke free for 22 yards. Summers, who is not known for his running, faked a handoff and picked up 8 big yards to the West 3.

Carney was not himself after averaging an incredible 264 rushing yards over the past four games. Leading up to the game, he did not practice Monday and Tuesday. Playing on one bad leg and one good heart, he gutted it up and contributed 118 rushing/receiving yards, including a 3-yard score from the wildcat formation with 46 seconds remaining in the half. Davie’s halftime lead was 21-7.

“He battled though it,” Devericks said. “That’s why we rotated Brodie some to try to keep Tate as fresh as possible.”

“(The injury is) where my knee meets my shin on the outside,” Carney said. “It hurts to put a lot of pressure on it.”

Davie couldn’t have played a better first half. Then everything went wrong and West stormed back.

West didn’t have much success passing, but sophomore QB Kian Bailey found Bralen Morris for 7 yards on fourth-and-4 from the Davie 39. Four plays later, a Davie linebacker blitzed through one gap and Long burst through another and raced 24 yards to make it 21-14.

The formidable tandem of Long (30 carries for 186 yards and four TDs) and Nasion Johnson (23 carries for 164) was starting to wear on Davie’s defense. After Davie punted, the Titans hammered for 78 yards in 13 plays to tie it at 21-21 with 9:59 left in the fourth quarter.

Lyons said: “Ton of respect to those guys. We knew it was going to be smashmouth, downhill running. Again, a ton of honor to those guys.”

Devericks: “They have a left tackle (6-4, 325-pound senior Jared Wilson) they ran a lot behind who is going to Georgia. (Long and Johnson) both hit it downhill tremendously hard.”

Less than five minutes later, West scored a third TD in as many possessions as Johnson scampered 35 yards up the middle. With a 28-21 lead with 5:29 to go, West could taste a perfect regular season and a home playoff game.

Moments later, it was third-and-8 for Davie’s offense. The War Eagles’ second-half possessions had resulted in punt, punt, turnover on downs. To this point of the half, they had gained 40 yards in 14 plays, with 28 yards in penalties and only two first downs. In other words, they were swirling toward the drain.

Then came the break Davie needed, a pass interference penalty that negated Aquavion Rush’s interception with four minutes left. Just when it looked like Summers and the offense were going down in flames, the junior QB reloaded. He found Maddox for 3 and 6 yards, the later leaving Davie in a fourth-and-inches situation at the West 42.

Devericks summoned the wildcat. Carney took a direct snap and started left, but Devericks had called timeout a split second before the snap. Seeing that running Carney was not in Davie’s best interest, he changed the call and wrong-footed the West defense.

“We were going to run wildcat and Caleb (Bowling) was going to lead for Tate,” Devericks said. “I saw a loaded box and said: ‘This ain’t going to go well.’ I called timeout and put Alex back in the game. I knew they were going to be man free in that situation, and we tried to find the best matchup we could.”

This is when lightning struck. Summers flipped a little 4-yard pass to Maddox, who used a spin move to shake his defender at the West 38. He junked another DB at the 30. He blazed 42 yards to the end zone to give Davie new life.

Now the man of the moment was Moure, who trotted out with Davie trailing 28-27 with 4:10 to go. With JT Bumgarner snapping and Reynolds holding, the senior kicker made overtime possible by drilling his 38th extra point in 39 tries this season.

Devericks: “Willy is kind of overlooked in the whole thing.”

Moure: “Like any other position, I’m pretty sure a receiver, a quarterback or a DB has the same feeling. You’ve just got to be confident and keep doing what you’ve been doing the entire season.”

Senior DB Beaven Arey saw little time because of an injury, but he put his body on the line in the fourth. He stripped Johnson and Shermer recovered the fumble at the West 42.

“The fact he got in at all and made some plays shows how much of a warrior he is,” defensive coordinator Blaine Nicholson said.

Davie, though, squandered the opportunity. Two negative plays preceded an interception by West’s Ajani Byrd, who returned it to the West 45 with 2:03 remaining.

Although it had been gashed repeatedly in the second half, Davie’s defense persevered and got a stop. Sophomore cornerback Willie Purvis covered up a home-run ball to Morris as the secondary forced three straight incompletions. West punted with 20 seconds on the clock.

Richardson: “It was stunts and blitzes. We were preaching all week to get to the ball, get to the ball. Through repetition, we finally got to where we were sitting there with at least seven dudes to the ball every play.”

The saga continued in overtime. Devericks won the toss and chose defense. On first down, Long was barely touched on a 10-yard TD run. Down 35-28, Davie was again hanging on the edge of a cliff.

In the bottom half of OT, Summers and Carney couldn’t make a clean exchange, and Summers alertly pounced on the fumble at the 13, a 3-yard loss. On second down, Carney fought for 4 yards. On third down, Summers lofted a high pass to the right corner of the end zone to Maddox. Davie yelled for interference, but no flag was thrown.

“We tried Za’Haree on a little fade route,” Devericks said. “A lot of contact didn’t get called, but we saw how they aligned that time.”

Now it was fourth-and-goal from the 9. Three receivers lined up to the left with Maddox split to the right by himself. He ran a slant and turned in his second huge play by making a diving catch in the end zone.

Said Summers, who threw for 220 yards and three TDs: “He beat his corner and nobody was there to help.”

Devericks: “All (Maddox) had to do was give one move to the outside and get underneath. Alex threw a great ball.”

Maddox: “It was a little low. I’m used to trying to make sure I get under the ball and always show it.”

Now it was decision time for Devericks. Should he kick for the tie – and a second OT – or go for two? The players inspired him to go for the win right there.

Devericks: “The guys helped me. They said: ‘Coach, are we going for two?’ I said: ‘Yeah.’ They said: ‘Good, let’s go get it.’ It didn’t make it easy, but I put it in the kids’ hands and trusted them in that situation.”

On the two-point play, Devericks and offensive coordinator Matt Gould called “Hawaii,” a play it had not used all year. Hudson lined up about three yards from right tackle Spencer Williams.

With ice running through his veins, Summers was patient as he rolled to his right. Carney supplied a block that allowed time for the play to develop. Summers called on a guy who hadn’t made a catch in seven quarters. Hudson ran toward the right side of the end zone and caught a pass that clinched one of the all-time classics.

Summers: “We run it at practice all the time. As soon as (Hudson) came out, I knew he was going to beat the dude. I just trusted him and got the ball to him.”

Reynolds: “It’s actually the first play we call every Thursday in practice for our two-point play. So we had repped it every single week. Zymere came through at crunch time.”

Hudson: “I sucked my man in. Once I saw him bite on my hips, I went right behind him. The ball came to me in slow motion. It was perfect. Winning for the seniors on Senior Night is just lovely.”

And then: “It’s unbelievable how even keel (Summers) is. To step up and make two throws like that at the end of a game … unreal. He never gets too high, never gets too low. He continued to believe and went through his reads.”

Notes: Davie beat West in back-to-back seasons for the first time since 2010-11. … West had a seven-game winning streak in the regular season. This was its first regular-season loss since the last meeting with Davie in 2019, when Davie stunned the 7-0 Titans 37-34. … A representative from the Shrine Bowl was among 920 fans to scout Carney and others. Carney has cracked the Charlotte Observer’s High School Heisman Watch List. … Four of Maddox’s six catches came in the last four minutes of regulation/OT. His first TD ended a Davie scoring drought of 20:26. … Davie’s leading tacklers were Gage Recktenwald (13), Bowling (12), Richardson (12), Lyons (11) and Hayes (seven). Justus Tatum had two pass breakups. Blake Jenkins had four tackles, a sack and a pass breakup. … Davie put West’s season to bed. The only CPC teams to make the playoffs were Glenn and East Forsyth. The final standings: Glenn/East 3-1, West 2-1, Davie 3-2, Reagan 2-3 and Reynolds 0-5. … Davie broke the program record for scoring average at 40.5. The old mark was 38.6 in 2006. … Carney had a season-low 61 rushing yards and Reynolds only had three catches, matching a season low. Davie still found a way. “We have a lot of guys who can make plays,” Devericks said.