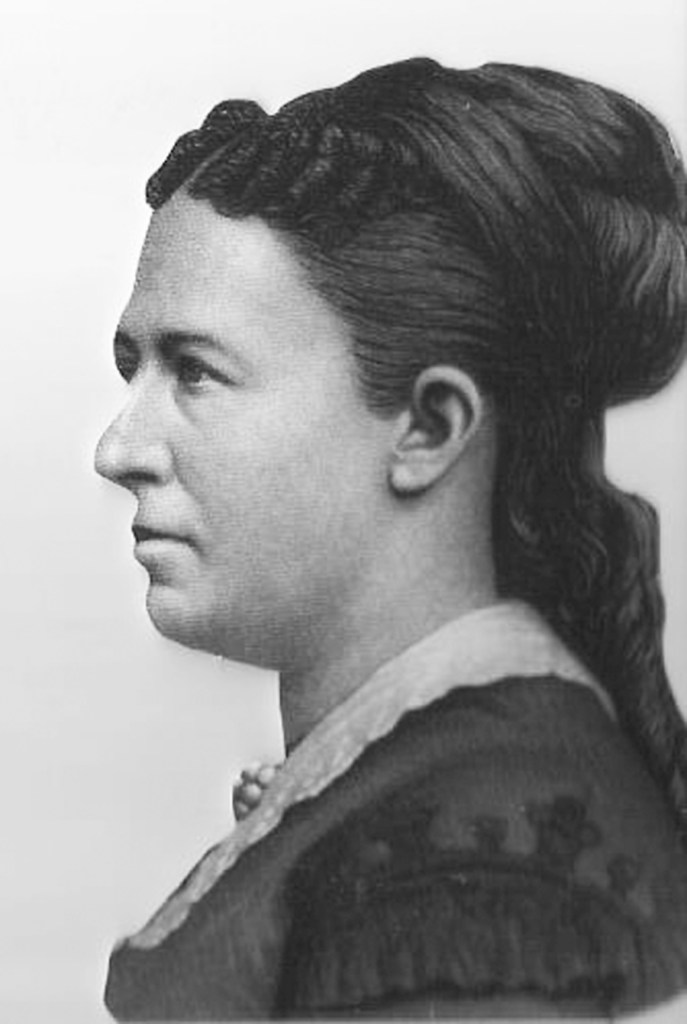 Julia Dent Grant loved being First Lady and living in the White House as did Dolley Payne Madison and Julia Gardiner Tyler.

Ulysses S. Grant, the 18th President of the United States, sent a letter to the Republican National Committee stating that he did not want to be a candidate for a third term. He sent that message without his wife knowing that he had made that decision. Grant sent that message secretly because he knew that his wife would be mad. When Julia found out about her husband’s action, she was not just mad; she was livid.

The book, The Secret Lives of the First Ladies, by O’Brien, says, “She had to be pried from the White House like an oyster from its shell, and, upon boarding the train that took her and Ulysses away from her beloved Washington, she collapsed into a seat and wept like a baby.”

Julia Dent was born on a plantation in Indiana. Her parents were Col.  Fredrick and Ellen Wrenshall Dent.The Dent family owned slaves who took care of Julia and fulfilled her every need and desire. Julia went to Misses Mauros’ boarding school where she was well-liked. When Julia was 18, her brother brought a friend from West Point to spend the weekend with his family. The young cadet, Ulysses Grant, was attracted to Julia. She was not the most beautiful of the Dent girls, but she had a pleasing personality. She also loved to ride horses and to dance.  Evidently those traits were more important to Mr. Grant than beauty because the two young people fell deeply in love.

Julia’s father did not approve of Ulysses because of his poverty-stricken background and the fact that he was a military man. Mr. Dent knew that if Julia married Ulysses she would have to endure many hardships. Ulysses’ parents did not approve of the Dent/Grant relationship because the Dents owned slaves.

All of the parental disapproval had no effect on the two young people in love.  They were married in the Dents’ living room after a four-year engagement. The engagement was so long because Grant served in the Mexican War.

After their marriage in 1844, Julia moved with Ulysses from post to post for several years and endured hardships without complaint. Julia did go back to live at her parents’ home in 1852 when her husband was ordered to the West. After being separated from his wife for about two years, Ulysses resigned his commission and returned home.

Ulysses tried to provide for his family in a number of ways. He tried farming on land given to the couple by Julia’s father. That did not work and neither did any of the other types of work that Mr. Grant tried. At one time he needed money so badly that he tried to sell wood that he hauled on a cart through the town. After about six years of failure in St. Louis, the Grants moved back to Ulysses’ hometown, and he went to work in his father’s tannery business—that was something that he never wanted to do.

When the Civil War began, Ulysses decided to return to military duty.  Throughout the war years, Julia joined Ulysses near the action as often as she could. President Abraham Lincoln had a hard time finding a commanding general who would fight. He heard about the victory in Vicksburg, Miss., and other victories in which the troops were led by Ulysses Grant.  Lincoln bestowed on the rank of lieutenant general on Ulysses S. Grant and made him commander of the Union Army.

According to the book, The American President, by the Kunhardts, “Grant said…President Lincoln… said that he did not care to know what I wanted to do…he wished me to beat Lee and how I did it was my own matter.”

That worked because it was to General Grant that General Robert E. Lee, the commander of the Confederate Army, surrendered on April 9, 1865.

After the Civil War, the Grant family went back to Galena, Ill. to a hero’s welcome. The people of Galena bought a house, actually a mansion, for the family to show their appreciation for Gen. Grant’s service to his country. That house is open to the public and contains many items that belonged to the general and Mrs. Grant and their four children.

Once again the American people chose a military leader as their President. The book, Glimpses of the Presidents of the United States and Presidential Places, by Betty Etchison West says: “Grant became the President of the United States, a job which he realized that he was not prepared to handle, and history tells us that he was exactly right.” Grant surrounded himself with people he thought would be able to do the jobs for which they were appointed and left them alone to do those jobs. A number of the people he appointed were not trustworthy and his terms in office were riddled with scandal.

The story was quite different for President Grant’s wife, Julia. She absolutely loved being First Lady.

She entertained lavishly which seemed to be accepted by the country which had just won a terrible war.Julia’s White House elaborate receptions were open to working-class people as well as royal visitors and rich Americans. Fandex’s, First Ladies, quotes Julia as saying, “My life in the White House was like a bright and beautiful dream and we were immeasurably happy.”

The years in Washington were great for Julia Grant if not for her husband. She was heartbroken to leave the city. After that departure, the Grants took a world tour during which they were treated like royalty. That pleased Julia tremendously.

After leaving the Presidency, Ulysses Grant invested in a business which failed. He lost all the family’s money and was once again desperate. His friend, Mark Twain, urged him to write his memoirs. The former President took his friends advice and began writing using notes that he kept during his military service. That project took on more urgency when Mr. Grant found that he had throat cancer. The former President worked at a furious pace because he realized that time was running out for him. He even went to a mountain retreat to write where he would not be disturbed. He finished the book (over 500 pages) just days before he died on July 23, 1885.

Julia Dent Grant was overcome with grief when her husband, who she loved so dearly and to whom she had been so loyal for 37 years, passed away.  The one small consolation may have been that her husband’s book was a great success and provided enough money for her to live comfortably the rest of her life.  She spent her remaining years living in Washington where she enjoyed the company of her children, grandchildren, and friends. She lived 17 years after the death of her husband, and she also wrote her memoirs.

Both Grants are buried in the General Grant National Memorial in the Morningside Heights Neighborhood of Upper Manhattan in New York City.