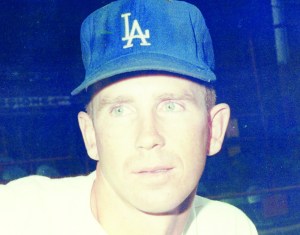 He was a native of Davie County and graduate of Shady Grove High School in Advance (1956) and Pfeiffer College (1960.) He was an outstanding athlete in high school and college to include all-state collegiately in 1959 and 1960. He signed professionally with the Los Angeles Dodgers upon graduation from Pfeiffer, where he was also Student Body President. He played professionally with the Dodgers and Cincinnati organizations for 6 years, retiring in 1966 from the Dodgers AAA affiliate in the Pacific Coast League. He was Minor League Player of the Year in the Alabama-Florida League in 1961, an all-star player in the Sally League in 1962 and Player of the Year in the Texas League in 1964. He cherished playing on the National Championship Team in Nicaragua in 1963 and always told of wanting to forget his major league game in the spring of 1963. After retiring from baseball, he moved to Winston-Salem and went to work for Wachovia Bank and Trust and later served as regional, district and southeastern manager of Pony Express Courier until his retirement in 1997. Never playing baseball again, he soon picked up slow-pitch softball, with his senior softball teams winning several NC state titles. He continued playing softball until the age of 80. Playing with younger players was one of his joys.

A member of Wesley Memorial United Methodist Church in Winston-Salem since 1965, he served in capacities with the church over the years. Upon retirement, he moved from Clemmons to Bermuda Run where he returned to the Yadkin River, one of his loves. In his retirement years, he authored several poems, a book titled “Growing Up in Advance,” and enjoyed collecting data on his family tree and their migration to the “Forks of the Yadkin” since 1750. Home for him was looking from the deck down onto the Yadkin River.

Although traveling to more than 80 countries during his lifetime, he said the most beautiful view was from his deck onto the Yadkin River during the North Carolina seasons. He was a member of the Davie County High School Hall of Fame, Pfeiffer College Hall of Fame, and Winston-Salem Baseball Hall of Fame. He will be most remembered for his faith, giving nature, kindness, and the love of his wife, brother, and family.

A graveside service will be held 2 p.m. Wednesday, Jan. 6 at Advance United Methodist Church Cemetery by the Rev. Joel Key and Pastor Angel Christ. The family will receive friends following the service.