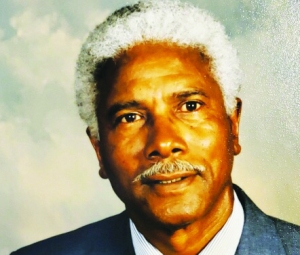 He was the son of the late Jacob Israel Bell and Rodema Hattie Hanner Bell, born April 27, 1922 in Cabarrus County. He was one of 14 children born to this union.

He was married to Addie Flint Bell on July 15, 1943 and enjoyed 76 years together. Four sons were birthed to this union. He was educated in the Cabarrus County School system. He served two years in the U.S. Army. Afterward, he was employed by Southern Railroad, Spencer, for 41 years before retirement. He learned the skills of carpentry and brick masonry and spent many hours and days helping friends and neighbors with building projects.

He was a lifelong and active member of the New Bethel Baptist Church, where he served as Deacon, Sunday School teacher and usher. He was a hunter and fisherman. In their later years, he and Addie would spent several months each year in their camper, fishing on the piers at Outer Banks.

He was also preceded in death by: his wife, Addie; 2 sons; Elvie Bell Jr. and James Walter Bell; and all of his siblings.

For several years, he was the primary healthcare provider for his wife, until they both required more assistance. They both moved into Davie Nursing and Rehab Center, Mocksville. He lived there for the past 18 months.

Survivors: his sons, Bobby Gordon (Verona) Bell of Lexington and Larry Allan (Robin) Bell of Roanoke, Va.; a daughter-in-law, Rose Bell of Kannapolis; a brother-in-law, Mack Cline of Cherryville; 2 sisters-in-law, Geneva Foote and Betty Frost of Mocksville; 7 grandchildren; 12 great-grandchildren; a host of nieces, nephews, cousins, friends, including the pastor and members of New Bethel Baptist Church, which he and Addie referred to as their sons and daughters.

The public was invited to attend a viewing on Sunday, Dec. 6 from 2-5 p.m. at Kelsey Funeral Home in Salisbury. A private service was held on Monday, Dec. 7 and burial followed in the New Bethel Baptist Church Cemetery.